Our youngest nephew Robert got married on Saturday. He's the last of our nieces and nephews to marry. The wedding was in Waterloo, Iowa. I work Fridays and Saturdays, so I only took off Saturday. We left at 9 am and got to Waterloo a little after 1 pm. We were able to check into our hotel early, change clothes and make it to the 2:30 ceremony in plenty of time.

They had originally planned to have an outdoor wedding at a park. The weather this spring has been terrible, and it did not cooperate for them. Luckily, they had a back up plan at the Waterloo Arts Center where the reception was held.

Here's Robert waiting for the bride. Our great-nephew Nathan, who will be nine in a few weeks, was ring bearer. He wasn't too excited about having to wear a tux, but he did a great job for his uncle Robert. It was great to see that side of the family. It is Kevin's brother's family. We haven't seen some of them in quite a few years. 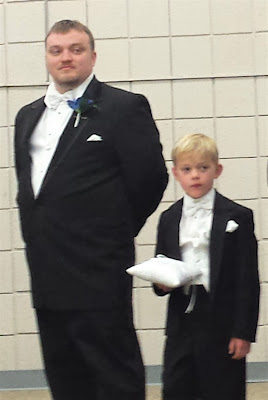 Poor Brittney was suffering all day. She had surgery on her foot a few weeks ago, and it became infected, so she's been in a lot of pain. She was actually supposed to be on crutches all day, but what bride is going to listen to that. 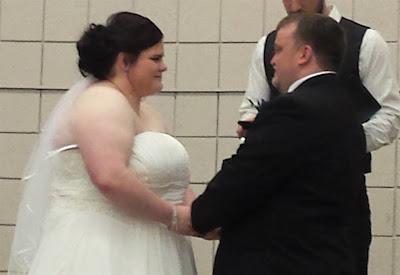 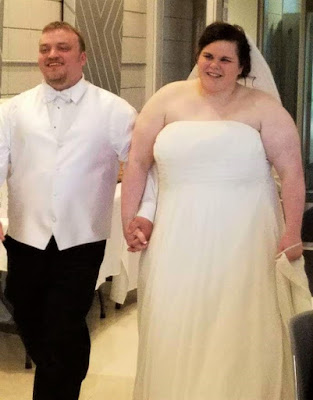 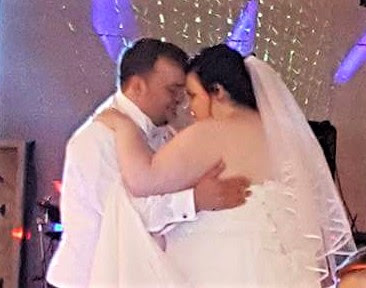 Not much else is going on with us. This has been the worst spring weather since we've been working at the park. Camper numbers are down, but even with the lousy weather, we've been about half full the last few weekends. Die hard Wisconsin campers don't let wet and cold weather keep them down.

The above average rain has made the ground extremely soggy, so Kevin has been struggling to get the grass mowed. We are fully booked for the upcoming holiday weekend. Some rain is expected during the week. Hopefully, it won't be too much as all sites are booked and some of them get quite muddy with a lot of rain.

Cold weather is keeping my bird feeder quite busy. I've seen a new bird this year that has not been here before. I believe it's called a Rose-breasted Grosbeak. Exciting! 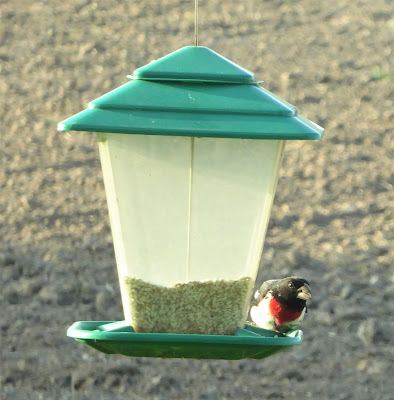 I put oriole food in the hummingbird feeder, but the orioles didn't seem to be able to perch on the feeder. I took the top off and put the bottom part full of nectar on a crate. I added the piece of wood so their feet had something more solid to sit on. That worked great. I've also been giving them grape jelly. I enjoy watching all of the birds at the feeders. 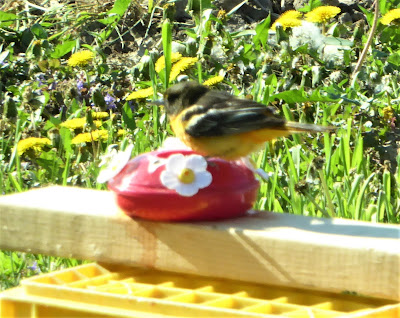 I can't stand the robins. They poop on everything. We put fake snakes on our vehicles, which helps to keep them from pooping on our stuff, but they still manage to occasionally bomb us. Somehow, they even manage to get it on our windows.

Don’t wish upon a star – Reach for one!
Posted by RV Khronicles of Kevelyn at 5:50 PM 1 comment: Links to this post