I’m going to split blogging about our cruise into two parts as I have lots to share!

We left New Orleans on a beautiful, sunny Sunday afternoon. The sail away party was fun, and we had no trouble finding some tropical refreshments to toast our departure. Cruise ships dock on the Mississippi River in the heart of downtown New Orleans, so there were some fabulous views from the top decks. 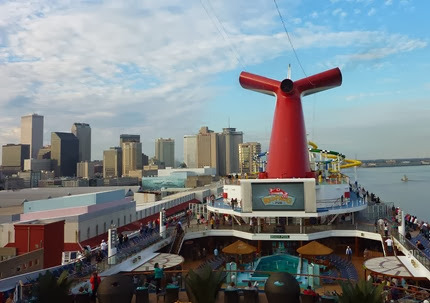 A small section of the Super Dome was visible as well as one of the famous whale walls. We were on the Carnival Sunshine which had undergone a $155 million restoration in 2013. What a beautiful ship. Just look at the water slides and ropes course. 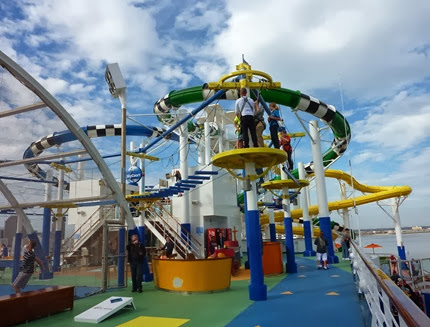 As you can see, we were still wearing jackets, but that would soon change. The weather for our entire trip was fabulous with lots of sun and temps in the 80s every day. 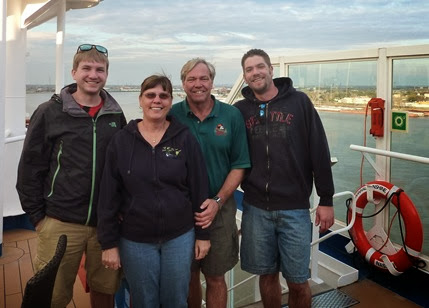 Anyone who knows me would say that I am a somewhat conservative person. For some reason, when they were looking for people to sign up for a drink mixing contest, I decided to go for it. There was a predetermined list of ingredients you could choose from, so I couldn’t do the drink I had in mind. Instead I improvised and named my creation a Eugene in honor of an awesome bartender on our cruise to Hawaii two years ago. My concoction consisted of a shot each of rum, amaretto, crème de cocoa, crème de banana and the rest was pineapple juice.

The contest took place on Monday afternoon. The contestants were myself and three guys. I was a little nervous they would make us look stupid, but I was assured by the staff that they would behave themselves. Two of the guys had drinks with tequila. They put so much booze in it, all you could taste was the tequila. The judges were the assistant cruise director, the head bartender and another passenger. 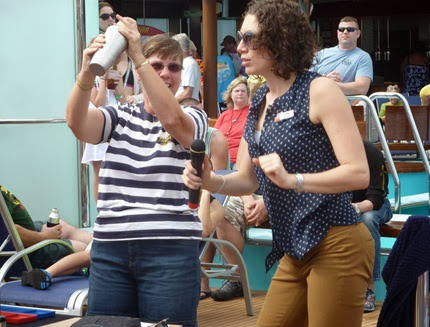 When it was my turn, I mixed up my drink. Then they had me do some shaking and dancing and that was it. After all was said and done, I was the winner! The prize was four free drink coupons. Cool!! 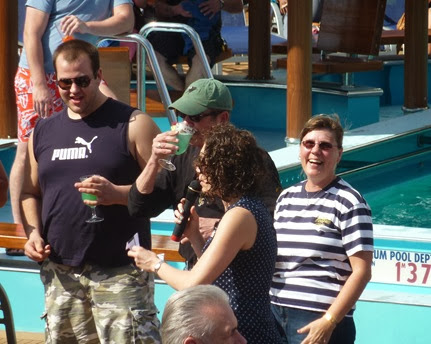 Our second day was another day at sea. We participated in the bean bag tournament and checked out many of the areas of the ship. All of us went down the waterslides several times. That was so much fun.

Then Eric and I decided to try the ropes course. There were two sides to the course, a harder side and an easier side. Eric chose the hard side, and I chose the easy side. I am happy to say I completed the course, but it was not easy in my opinion. I don’t know that I would have been able to do the hard side. 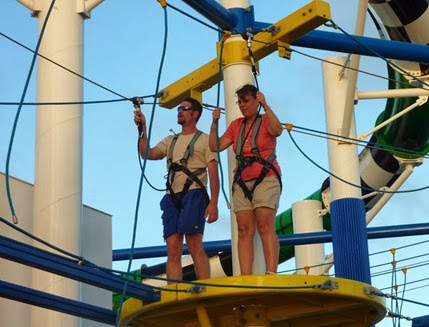 Eric had no trouble. In fact, he enjoyed it so much he went around a couple of times on both courses. Once was enough for me. But, I’m proud of myself for trying a new challenge and conquering it. 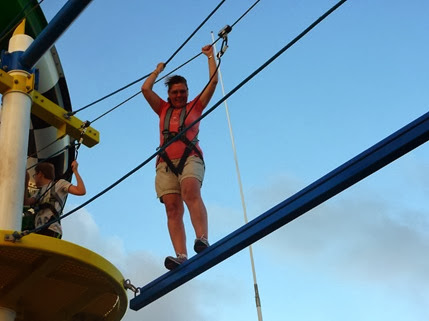 Kevin took a bunch of pictures of me. I had to laugh at the look on my face on many of them. Our son Korey was a high adventure director at his last job and spent many days helping summer campers climb a rock wall and navigate a ropes course much harder than this one. So, he had no interest in trying this one.

That evening we had one of many beautiful sunsets. 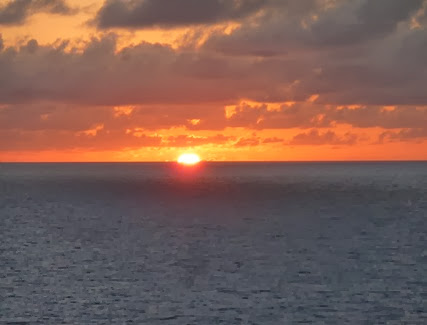 On Wednesday we arrived at Mahogany Bay, Isla Roatan, which is an island off the coast of Honduras. Cruise ships have only been coming here for a few years. The ship docked at a very nice pier with great shops at the end of the pier. There is also a private beach for cruise ships a short walk from the pier. The entire pier area was beautiful! 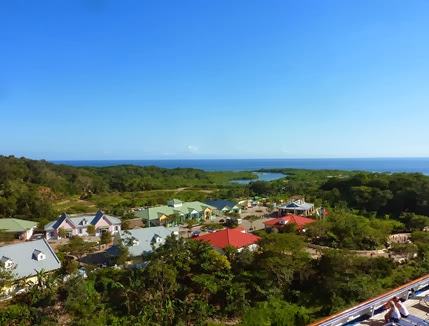 We had booked an excursion through Carnival to swim and snorkel with dolphins. The excursion had many great reviews online, so I was very excited. We took a 20 minute ride in a van to get to the resort where about a dozen trained dolphin live in a two acre area of the bay which has nets around it so they can’t get out.

We were in a group of twelve people. We stood in the water about waist deep and a trainer had the dolphin swim right in front of us so we could touch it. Then he had her do a few tricks. She left for a while because she had a baby with another trainer. Eventually she came back with the baby. She didn’t seem to want to do all of her tricks because she was more interested with her baby. Then they did pictures of each family with the dolphin and then individual pictures of the dolphin kissing each person. 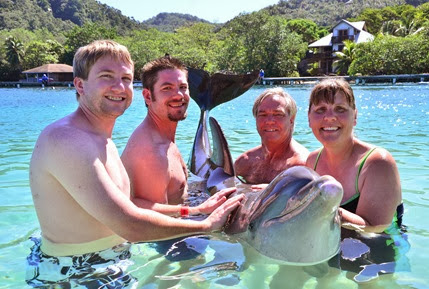 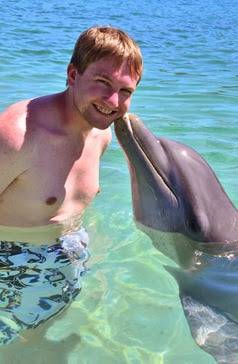 Eric didn’t want to have his picture taken for the kiss. After we did the pictures, we put on our snorkel gear and had 30 minutes to swim in the enclosure with the dolphin. We saw them swim under us a few times and saw them playing with each other on the surface. This excursion was the most expensive one we did, and we were a bit disappointed. We did not feel we were able to interact with the dolphin as was advertised. Also, the pictures were way overpriced. They charged $85 for a family of four for 31 pictures they emailed to us. That was double what we paid at the next excursion for more pictures. It was fun, but we didn’t feel it was worth the money or that you got what was advertised.

After we got back from the dolphin excursion, we walked around the pier area for a while and walked to the beach. For someone who didn’t want to pay for an excursion, this pier area is excellent to just get off the ship and walk to a beautiful beach. Definitely one of the nicest ports I have ever seen.

Come back tomorrow for the rest of the trip including zip lining and ATV riding!

Posted by RV Khronicles of Kevelyn at 9:31 AM 2 comments: Links to this post