What’s Wrong With This Picture

Our family have been Milwaukee Brewers baseball fans for many years. Some of our best memories are from games Kevin and I attended in the early 80s when Harvey’s Wallbangers were playing their hearts out. Our team had such greats as Robin Yount, Paul Molitor, Jim Gantner and Gorman Thomas.

On Tuesday we went to watch the Brewers play the Oakland A’s at the A’s Spring Training park, Phoenix Municipal Stadium. There were four former players there signing autographs on the concourse. I recognized one of them. But, there was one problem with what he was wearing. Here’s his picture. Can any of you guess who he is and what’s wrong with this picture? 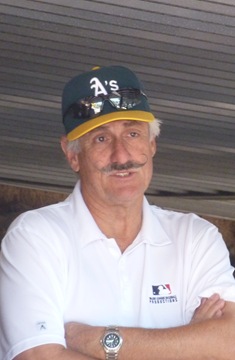 The park is the only one in the Phoenix area that does not have lawn seating so we had to buy outfield bleacher seats. We were pretty close to the field. The seats were in the sun and it was hot with highs in the mid 80s. The park is very near the airport so we saw planes flying quite close throughout the game. 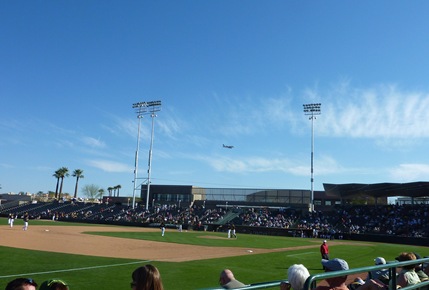 The Brewers were winning until pitcher De La Cruz came to the mound. He ended up giving up four runs and was taken out of the game before he got even a single player out. Those four runs cost us the game again. He also gave up four runs in the previous game we had been to which caused a loss. So, we had now been to four games and seen three losses and one tie. I hope it’s not a sign of what’s to come for the season.

A funny thing happened at that game. There was a family sitting in front of us with a little boy, about five years old. I foul ball came their way and the dad was able to snag it. He handed it to his son, and the little boy immediately threw it back out onto the field. After he found out he could have kept it, he felt bad and kept trying to get another one. All the people around them were also trying to get one for him. Finally, near the end of the game a ball was tossed into our area, and the man who caught it gave it to the little boy. I’m sure he’ll never live down that story :)

On Wednesday we went to Hohokam Park in Mesa which is home to the Chicago Cubs. It’s a huge stadium seating almost 13,000 fans, and it was packed. We met Frank and Betty at the game. We bought lawn seats and found a place to sit. It was again in the mid 80s and no shade. Luckily, there was a shady area under the score board where we could go and cool down a little. And, the good news is the Brewers won 10 to 2. We finally saw our first win this year! 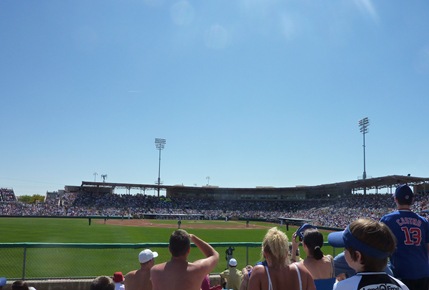 After the game the four of us went to a Mexican restaurant in Mesa I had found online called Blue Adobe Grill. The food was very good. I had a chicken wrap which was delicious. The rest of the group had the daily special of stacked enchiladas. The prices were good, you got lots of food, and it tasted very good.

Today we had our carpets cleaned. The day we arrived at this park, I saw an RV a few sites down from us with a carpet cleaning van outside. I got the guy’s business card, and today he came to clean our carpets. This is the first time we’ve had them cleaned. He also cleaned our 5 x 7 area rug. The total bill was $90. I’m not sure if that was a good price, but it needed to be done and it looks like he did a good job.

So, now our recliners are squeezed into the kitchen and our dining chairs are outside. We’re waiting until tomorrow morning to put everything back to give it time to dry thoroughly.