More Visitors and a Ballgame

Last week we had two more visitors. On Wednesday our friends George and Norma came for a two night visit with two of Norma’s grandchildren. Kevin and George worked together about 30 years ago and have remained friends ever since.

They visited us last year in July as well. Both times the weather was very hot and humid. We teased that they need to pick a different time when it’s not so hot. Even with the heat, we had a great time and hope they come back again soon.

On Thursday I had lunch with a group of ladies I used to work with about 10 years ago at Kennedy Middle School in Germantown, Wisconsin. The group is a book club. Although, we do enjoy reading and discussing the books, most of the time is spent chatting and catching up on each other’s news. It was fun seeing them again. 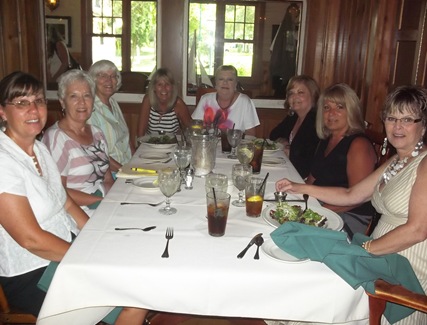 In our old life, Kevin was in a Sheepshead card playing group with some guys he worked with. They would try to get together once a month. Our son Eric ended up joining the group several years ago. They still try to get together a few times a year when we are in Wisconsin.

On Saturday the group came to the campground. Eric came a little early and spent the night which was a bonus for me as I got to spend some extra time with him. Another of the players Art came with his wife Dawn in their new to them 2006 Gulf Stream motorhome. What a beautiful rig! We are so excited for them.

Another one of the players Paul brought his wife Anne, so I had fun visiting with the ladies while the guys played cards. We enjoyed a beautiful evening relaxing around a campfire. 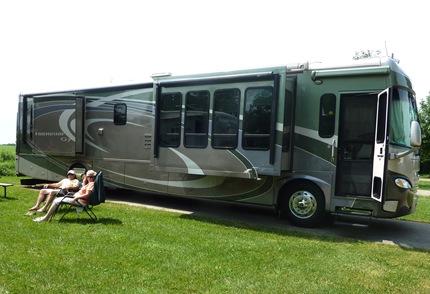 Last night we attended a Milwaukee Brewers baseball game with Eric and his friend Jeremy. It just so happened that Major League Baseball announced the suspension of Ryan Braun just hours before the game. He has been one of the most loved players on our team. What a disappointing turn of events. The Brewers lost, but we still had a good time, as you can tell from the goofy grins. 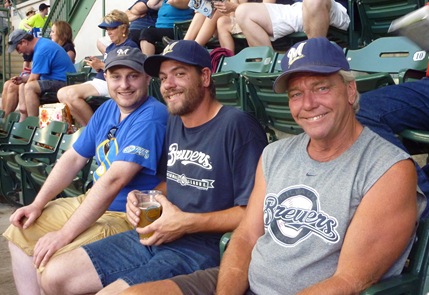 Only 2-1/2 weeks until the wedding. The excitement is building!!