We arrived at Camp Lake Jasper RV Park in Hardeeville, South Carolina on Thursday afternoon. This is another great RV park with huge sites. It looks fairly new and is clean and beautifully maintained. I chose this location because it is conveniently located off I-95, and we can visit Savannah, Georgia and Charleston, South Carolina from here.

I found a great deal on Groupon for a walking tour with Savannah Belle Tours, so we headed out on Friday morning for a 10:30 am tour. The guide Michelle was very knowledgeable, and we learned many interesting facts about the history of Savannah and Georgia. Georgia was the 13th original colony founded in 1732, and was populated with the poor and prisoners from England. Many of them were in debtor's prison in England, yet they were skilled craftsmen. They were promised a paradise in Georgia. The northern colonies were willing to have Georgia as a new colony to act as a buffer between them and Florida, which was still under Spanish rule.

The city of Savannah was laid out in a grid pattern with squares in the center of neighborhoods. Originally, all homes were built using pine, and the squares were meant to protect the homes from fire. Unfortunately, the squares didn't prevent fires from burning homes, and Savannah had several major fires which wiped out most pine homes. Eventually, in the 1800s, those with the money began building their homes with stone and bricks.

Most squares had a church on one of the corners, so there are many churches in the historic district. The squares are named after political leaders or generals in the Revolutionary War or the Civil War. Many of them have monuments in the center. They have beautiful live oaks growing in them, which is the state tree of Georgia. The squares provide peaceful places for people in this very busy city to come and relax. This is Lafayette Square with a fountain in the center. 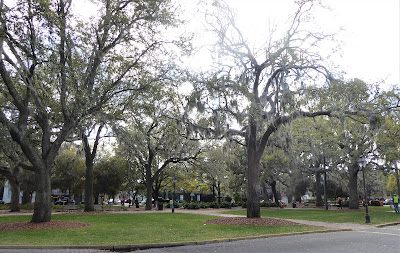 This is the Lutheran church in the historic district. They just celebrated their 275th anniversary last year. 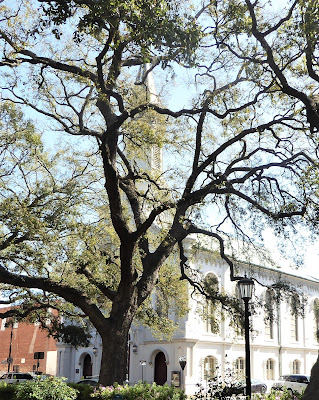 The historic district of Savannah is a mix of beautiful old historic homes and newer construction hotels and businesses.  City Hall was built in 1905 and has a 70 foot gold leaf dome. 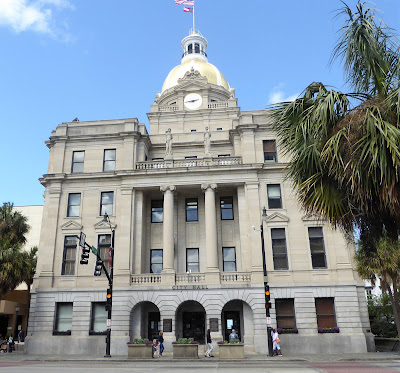 This house is known as Sherman's Headquarters. It was built in 1854 for Charles Green at a cost of $93,000 which was a small fortune in those days. Green offered the house to Sherman to use as headquarters when Sherman's army conquered Savannah on December 22, 1864. Residents of the city begged Sherman not to burn their city. He wrote a letter to Lincoln offering Savannah as a Christmas gift with its many bales of cotton and location as a port with a railroad. 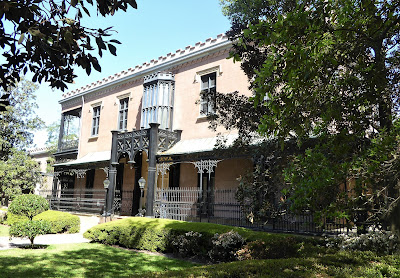 In January, 1865 Sherman met with leaders of the black churches in Savannah. That meeting resulted in Sherman issuing Special Field Orders No. 15 which encouraged enlistment of freedmen and also gave each freed family 40 acres of coastal land. After Lincoln's death, President Andrew Jackson revoked the order, making it difficult for freed slaves to gain independence.

The founder of the Girl Scouts Juliette Gordon Low was born in Savannah in 1860 and founded the group in 1912. This house is the first headquarters and has a museum. There is also a museum at her birth house where you can buy girl scout cookies all year long. 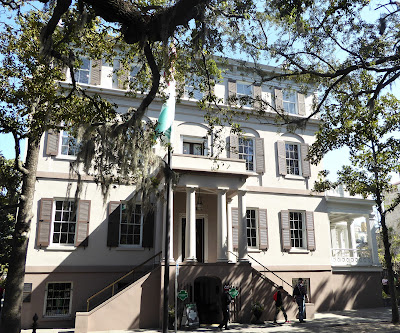 The Cathedral of Saint John the Baptist was built in 1873. It is beautiful inside and out. 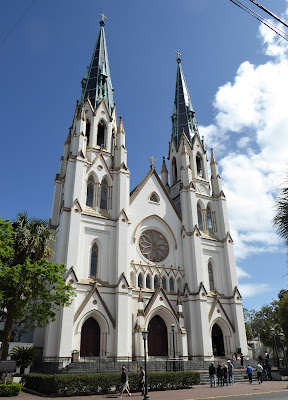 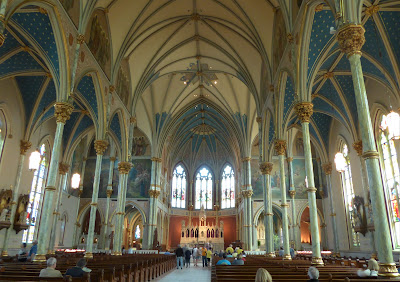 Even the police station is historic. We got a kick out of seeing the old police cars parked in front of the station. 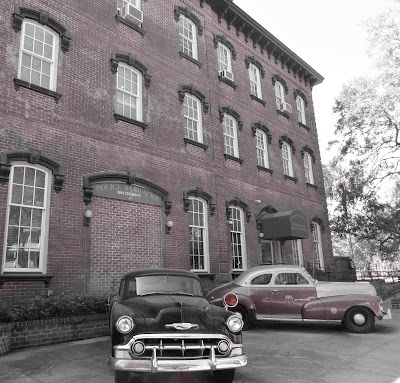 Spring arrived early in this part of the country this year. Tulips and daffodils bloomed a month early in February. There were some trees blooming. 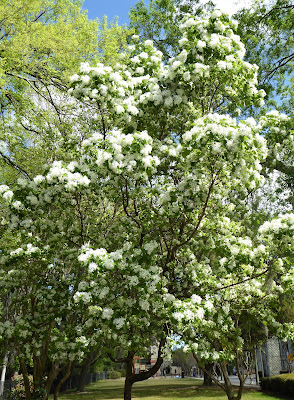 Johnny Mercer is a native of Savannah. He penned 1,400 songs, the most famous being Moon River. He was co-founder of Capitol Records and founding president of the Songwriters Hall of Fame. He was nominated for 18 Academy Awards for best song and won 4 Oscars. 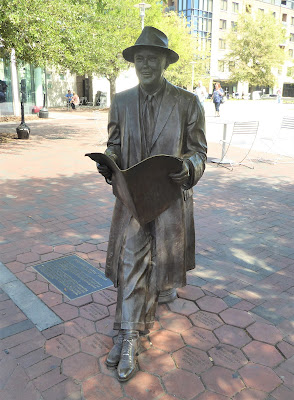 We had lunch at Moon River Brewing Company. The food was good and Kevin enjoyed a flight with nine samples.

Savannah is a beautiful, historic city along the Savannah River. We walked along River Street with its many shops and restaurants. Tourism is actually the sixth biggest industry. Savannah is the fourth busiest port city in the country and the port is the number one business in the city. Michelle told us that South Carolina has overtaken Georgia as the peach capitol of the country. Free range chickens and pecans are now Georgia's biggest agricultural products.

Don’t wish upon a star – Reach for one!
Posted by RV Khronicles of Kevelyn at 9:15 AM 4 comments: Links to this post