The busy weekend is behind us, and we’re back to our wonderful quiet and peaceful park.

All 24 of our sites were booked for the long weekend. On Friday morning we played 9 holes of golf. We had a great time. Kevin had an excellent round. I felt like I was hitting the ball much better.

By the time we returned around noon, several campers were already here and they kept on coming until it was almost dark. Although there were many people around here all weekend, we had no problems. Everyone behaved very well.

Most of our sites were booked by four separate groups. Because each group only had one campfire, we didn’t sell as much wood as we expected to for a long weekend.

Our friends Jim and Wendy had the site next to us booked. They arrived late Saturday afternoon. We played some games, enjoyed a few meals together and visited around the campfire.

The weather was quite a mixed bag. We had rain both Friday and Saturday evening which put a literal damper on campfires. Sunday had temperatures in the low 90s and high humidity. Monday was very windy with storms predicted.

The exodus Monday began pretty early and by noon almost everyone was gone. Storms did come through Wisconsin late Monday afternoon, but we were spared anything serious. Just a little rain and some distant thunder and lightning. Other areas weren’t so lucky. Not too far from us there was large hail and some building fires caused by lightning.

The boat dock across the road was also very busy all weekend. Because of the off and on rain showers, boats were in and out all weekend long. I don’t think that boating would be for us.

The orioles have discovered the food I’ve put out for them. This guy is enjoying one of the oranges I stuck to the top of my shepherd hook. 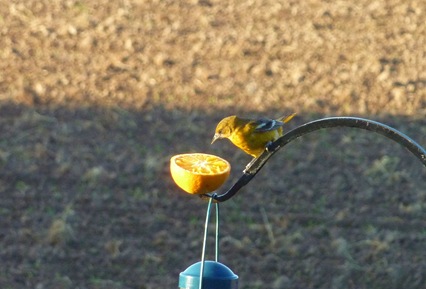 I also put some grape jelly out for them. I have seen some orioles eating the jelly, but this little bunny was checking it out as well. He must not have liked it because he didn’t stay long. 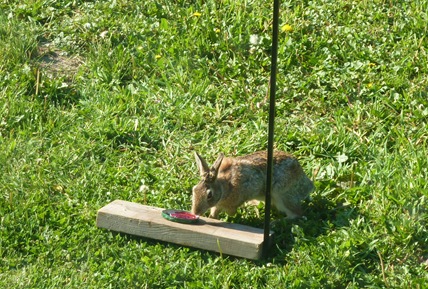 This is our second summer at this park. Park visitors have told us they’ve seen deer, but we never have. That is until last week. These three deer were running through the field right behind us. I hope they don’t discover my garden. 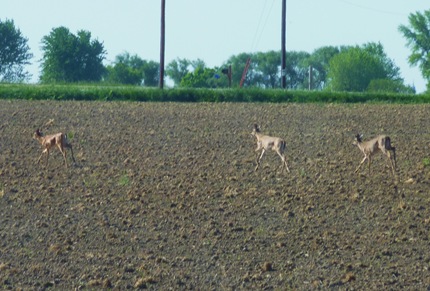 Sunday night was the last episode of Harry’s Law. We’ve really enjoyed this show for the two years it was on. I was sure bummed when I read that it has been cancelled. According to what I read online, it was the second most watched show on NBC, but they cancelled it anyway. Apparently, it doesn’t fit the demographics they’re looking to attract. Not enough young people watched it. I guess we old folks don’t matter.

We don’t have any big plans for this week. Kevin will be working his 24 hours in the park. I plan to wash my car and go through the bedroom closet to get rid of some stuff we haven’t used.

Posted by RV Khronicles of Kevelyn at 7:52 AM 2 comments: Links to this post