Tomorrow is the big day. We will be hitting the road again after six months of working at Derge County Park in Beaver Dam, Wisconsin. We are ready to go!!!

Last week I attended an end of season meeting with our boss and some of the other park attendants in the Dodge County Parks Department. We learned that this summer was a record breaking year for the campgrounds. I already knew that for our park. We were busier than ever.

I was hoping for a bit of a slow down in fall, but no such luck. The weather has been fantastic, and the campers keep coming. This weekend we were 3/4 full. That’s just unheard of for this late in the season. Normally, by the time we leave it has been below freezing for a few nights. This year the lowest temps have gotten is in the high 30s. Today is supposed to be in the high 70s. Amazing for October!

Yesterday we worked hard all day getting everything ready to leave. We have some close up duties for the park, but the water remains on until the end of the month, so Kevin doesn’t have to shut that all down.

We are surrounded by farm fields. They rotate the crops, and this year it was soybeans. Last week they began the harvest which is very dusty. We always hope for a wind blowing away from us, but the first day the wind came right at us. It wasn’t too bad, but there was definitely quite a cloud of dust that drifted over us. Luckily, Yuma has mobile RV washing companies that wash your RV, awning and truck for very reasonable prices. We’ll be having that done as soon as we arrive.

The machinery the farmers use is amazing. Somehow, it separates the beans from the plants and puts them in the hopper on top. The rest of the plant is chopped up and comes out the back, creating the dust. A few days later they tilled it all under, which I’m sure makes for good fertilizer. 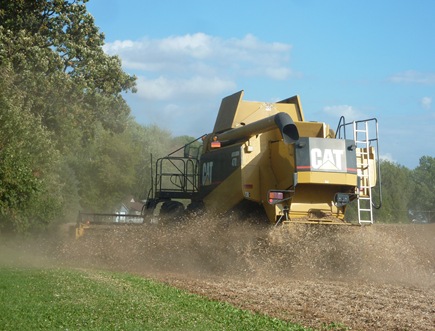 Today we’re going to our son Eric’s house to watch the Packer game and celebrate Halloween, Thanksgiving and Christmas with him. We’re bringing him some Halloween treats, I made him his favorite soup, and baked Christmas cookies to take to him. Then we’re all going out to dinner with my mom and bringing her Christmas gifts as well. In the six years we’ve been on the road, this will only be the second one where we’re not with family for Christmas. We come home every other year.

The carp harvest in the lake continues. They bring large, long flat boats full of fish to the launch. A semi is waiting to take the fish away. A large scoop is attached to a front end loader and the fish are scooped out of the boats into containers in the semi. We’ve heard they’ve harvested millions of pounds of carp over the last four years out of Beaver Dam Lake. The fish is shipped to New York where it is sold in Chinatown. Wow. 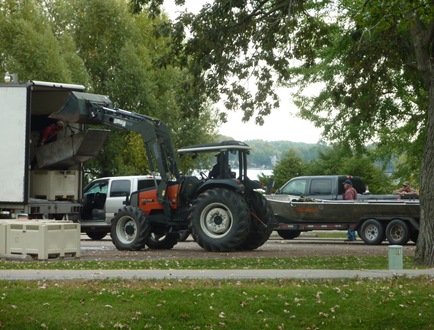 Last night there was a beautiful sunset as a send off for one of our last nights in Wisconsin. That’s a silo in the distance. 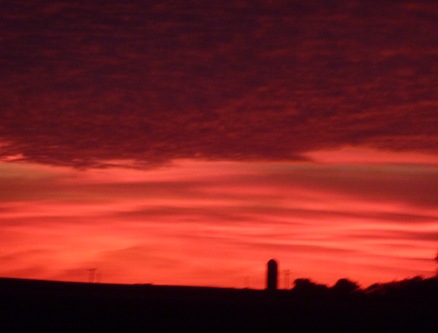 We’ve been invited to return next year to work at this park, and we will be back. It’s such a quiet, peaceful and beautiful location. Reservations are coming in for next season, so I think it will be another busy summer.

Our travel plans are to spend three nights in Iowa visiting with Kevin’s brother and his family. Then on to Lincoln, Nebraska for four or five nights to celebrate the holidays with our son and his wife. Then a few nights in the Denver area to visit Kevin’s cousin and friends. That should have us arriving in Yuma the last week in October.

Yuma has been experiencing above average temperatures as well. It was 100 last week. Hopefully, it will be cooler by the time we arrive.

We’re going back to Fortuna de Oro RV Resort. We enjoyed it there so much last year, we’re going back for another year. Some friends will be joining us there for a few months, so it should be a great winter.

Posted by RV Khronicles of Kevelyn at 7:41 AM 3 comments: Links to this post