When we owned a house, we had a garden for many years.  Every year we fought with the deer and rabbits to get some bounty from that garden.  Once the kids left home, we gave up the fight and planted grass where the garden had been.

I decided I would like to try growing some fresh produce again.  I haven’t seen any deer or rabbits in the park, so I’m going to give it a try.  Yesterday Kevin built a 4’ x 8’ frame for me and he dug up the grass inside of the frame.  We’ve placed it next to the wood shed. 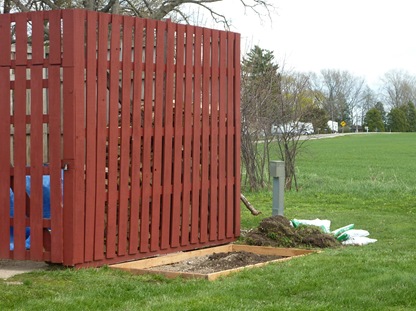 Today I added some topsoil and compost we bought and planted lettuce, beans, peas, cucumbers and acorn squash.

In a few weeks when the weather gets a little warmer, I’ll buy some tomato and pepper plants.  Since we’re putting down roots at this park until late September, I’m hoping for some yummy home-grown vegetables.  We’ll see if the critters leave it alone.

Kevin has already worked two weeks and submitted his first timesheet.  It was rather cold and windy this past week (again), but he managed to get the grass cut. 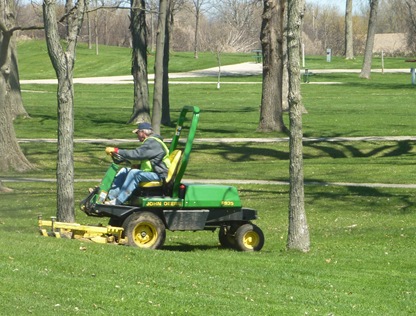 The county is buying a new mower for this park.  They had it narrowed down to two different models.  Kevin got to go and try both of them out and give his input.  They’re buying the one he liked best!  He should have it around June 1st.

There are 24 sites in our campground.  We have 7 occupied sites this weekend.  It’s opening day of fishing season today so there is lots of activity at the boat launch across the street.  Some of the people in the campground have boats and are fishing.

The weather has actually been pretty nice the last few days, partly sunny and highs in the mid 60s.  They’re predicting possible highs in the 70s for mid week.  A heat wave!  Of course, there’s plenty of rain in the forecast as well.

We have been members of the Milwaukee Area Jaybirds Camping Club since 1981.  Last summer when we were co-hosts at Atsico Park, we were able to leave a few weekends and camp with the club.  Since we are camphosting by ourselves at this park, we didn’t want to ask if we could leave. However, we hope to go to some of the club campouts at least for the day on Saturdays.

Last Saturday was the club’s first campout of the year, and they were only about 30 miles from us.  Since there wasn’t anyone camped in our park for the weekend, we drove up for the day on Saturday.  It was great to see our camping friends again.  I went shopping with some of the ladies to an Amish bakery and grocery store.  That Amish bakery makes the best pecan rolls!

During the afternoon some of the ladies participated in a basket-making session. 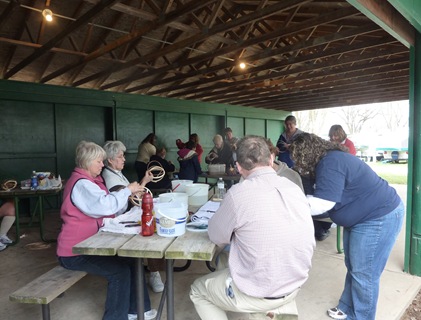 Here are some of the nearly finished baskets. I didn’t make one because I didn’t really have a need for one, and space is limited, you know!

We stayed for the potluck supper and Kevin had a chance to play Sheepshead (cards) with the guys.  If you aren’t from Wisconsin, you probably haven’t heard of it.  We had a nice campfire until the rains came around 10 pm.  Time to go home :)

I spent the week doing Spring cleaning inside our home.  Dust and sand had gotten into everything while we were in the desert.  It has now been thoroughly cleaned from top to bottom.  As soon as we have some decent weather outside, it will be getting a bath on the outside, too.

Another project I plan to do this summer is to go through every cabinet and reevaluate whether we need everything we have with us.  Now that we’ve lived in it a year, I think there may be some things we kept that we don’t need.  Maybe, one cabinet a week.  No need to rush these things.  I have all summer.

The new sim card for our Mi-Fi was finally delivered to Eric’s house yesterday.  We’ll be seeing him tomorrow for Mother’s Day so he’ll bring it with.  Hopefully, that will solve the problem.  We’ve had the Mi-Fi for almost two weeks and were able to use it for a total of two hours.  Bummer! 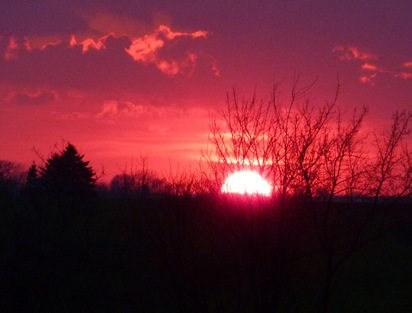 Since we haven’t had the best weather since we’ve been back in Wisconsin, I especially liked this sunset on Thursday night.

Happy Mother’s Day tomorrow.  My mom is treating the family to a restaurant dinner.  Thanks, Mom!