Last Monday we left Paducah and drove to Elkhorn Campground in Frankfort, Kentucky. We're here for a week to explore the Louisville, Lexington and Frankfort areas.

Yesterday we visited the Kentucky Derby Museum on the grounds of Churchill Downs in Louisville, Kentucky. Admission was $15 which included a thirty minute guided tour of the grounds, an excellent eight minute movie, and two floors of museum exhibits.

The Churchill Downs facility is much bigger than I expected. Our tour guide Bob was full of interesting information. The first derby was held in 1875. The race has been run for 142 consecutive years starting the year before Custer's Last Stand.  The original track was founded in 1873 by Meriwether Lewis Clark, Jr, the grandson of William Clark of the famous Lewis and Clark duo. He originally leased 80 acres of land from his uncles, Henry and John Churchill.

Names of the winning horses are displayed all along the buildings. Only three year old thoroughbreds are allowed to race each year with a field of a maximum of twenty horses. Therefore, a horse can only race once in its lifetime. Each year about 44,000 thoroughbreds are born in the world, so the top twenty are certainly an elite group. 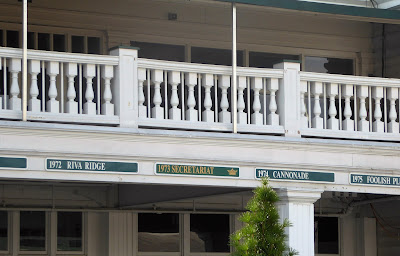 We saw the paddock area and the tunnel where the horses enter the track. The grandstands only hold about 55,000 spectators. Attendance has been around 170,000 the last few years. All of those extra people are spread around the grounds and in the infield area, where they stand the entire time. 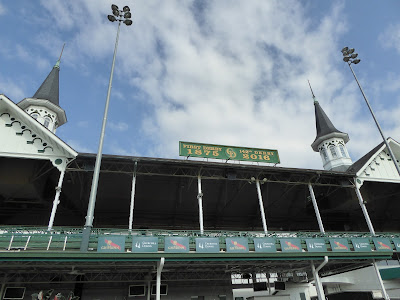 There are actually fourteen races on derby day. The Kentucky Derby is the 12th race of the day. I can't imagine being jammed into that place for an entire day with all those people.  The track is 75% sand, and is a one mile oval, but the race is 1.25 miles long. So, the horses actually start .25 mile before the finish line and the portable starting gates are quickly moved out of the way as the winner will be thundering past in less than two minutes. The white pole in the picture below is the finish line. 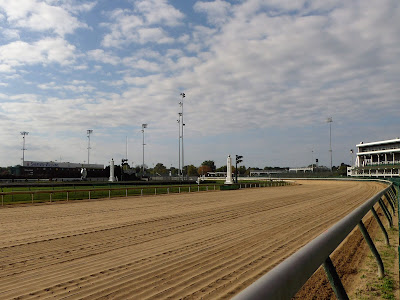 There are over 1,200 betting windows as well as betting machines throughout the facility. We heard several estimates, but it sounds like at this track only, nearly $200 million dollars is bet on Kentucky Derby race day with about $25 million going just to the derby itself. All of these bets are cash only. Can you imagine the security needed for all of that money!!

The winner of the derby in 2016 was Nyquist. This statue is in the courtyard painted in the colors of the silks the jockey wore. 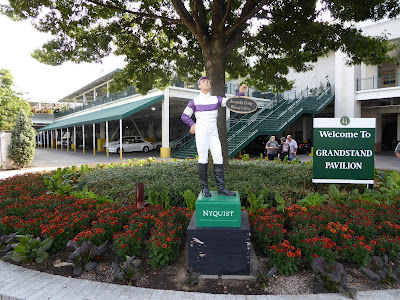 The movie in the museum was on a brand new state of the art 360 degree screen, the largest in the world. It was very informative and well done.

We saw lots of exhibits in the museum. One showed many of the hats worn by spectators. I thought this one was funny as it represents everything Kentucky from the Colonel to the bourbon to the roses to the horse on top. It had won a people's choice award. 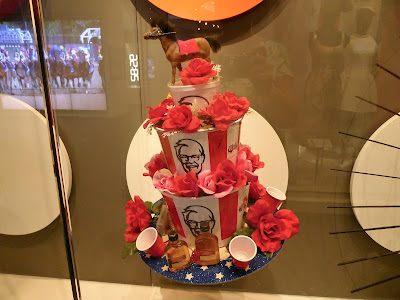 We had our picture taken by a statue of Nyquist. The garland of roses presented to the owner of the winning horse has 564 roses. It is made by the Kroger floral department. 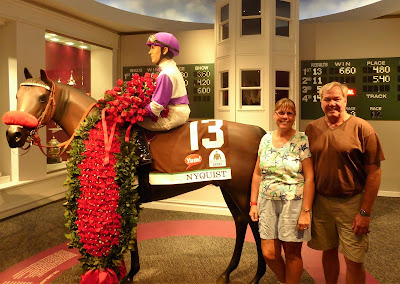 The average jockey is between 5'2" and 5'4" tall and weights 115 pounds. The jockey plus his saddle can not weigh over 126 pounds. They are weighed before the race and again after the race. If they lost weight during the race, they are disqualified.

This is done due to cheating in the past. It seems some jockeys would put lead pellets under their saddles and throw them out at the back side of the track where officials couldn't see them. Our guide suggested that's where the phrase "get the lead out" originated. The saddles are amazingly small. 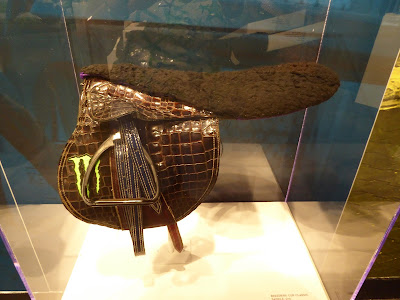 We thoroughly enjoyed our visit to Churchill Downs, and would recommend it if you are in the Louisville area. We continued our day south to see how close we could get to Fort Knox.  It's about 30 minutes south of Louisville on Hwy. 31W. Here's the view from along the highway. 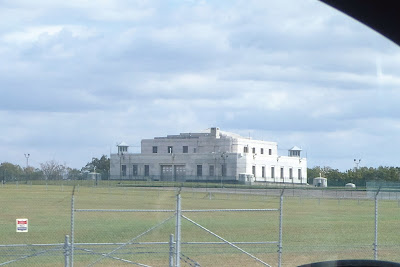 We saw a sign for a visitor center and drove in. It turns out the center was for people who want to visit the Army base which Fort Knox is built on. Below is the view from the side. 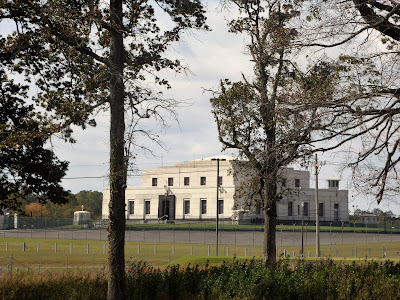 I saw a documentary on the History Channel about Fort Knox last winter. The show was done in the 1960s and was the last time any film crew was allowed inside. It was very interesting. Did you know that during WWII, England sent the crown jewels by ship to Fort Knox to have them protected from the Nazis.

Another 30 minutes south of Fort Knox is the Abraham Lincoln Birthplace National Historic Park. We might as well go there, too. Lincoln's father bought a 300 acre farm in Kentucky for $200. Abraham Lincoln was born there in a small log cabin on February 12, 1809. There was a land dispute and the Lincolns had to move to another farm. They then moved to Indiana when Abe was seven years old. He never lived in Kentucky again.

A group of businessmen and citizens established the Lincoln Farm Association to raise money to preserve Lincoln's birthplace and establish a memorial in 1906 near the time of the 100th anniversary of the president's birth. They raised $350,000 from 100,000 citizens to build a memorial to house Abe's birth cabin. President Theodore Roosevelt laid the cornerstone in 1909, and President Taft dedicated the marble and granite memorial in 1911. 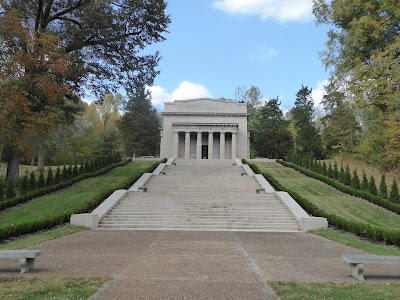 There are 56 granite steps leading up to the memorial, one for each year of Lincoln's life. I was amazed at the size of this memorial in rural Kentucky. It was originally thought the cabin at this spot was the original cabin Abe was born in. It has since been established that it is not, but the cabin inside the memorial is a symbol of the cabin he was born in. It's size is 16 x 18 feet, which makes it a bit smaller than our RV. 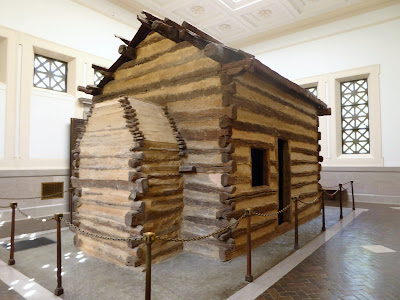 So, our loop of a trip yesterday was almost 200 miles total. We saw a lot and really enjoyed the day. Stay tuned for more sightseeing in the days to come.

Posted by RV Khronicles of Kevelyn at 3:35 PM No comments: Links to this post