Today we went on a whale watching boat tour.  It was another gorgeous sunny day reaching about 70 degrees.  I made sure to take Dramamine, and all was well in the motion sickness department :)

Since we’ve been in California, I learned that tens of thousands of California Gray Whales migrate each year from Alaska to Baja, Mexico between December and April.  I just had to see for myself.

There are a number of companies offering tours.  I decided to go with Flagship Harbor Excursions because they have a naturalist from the Birch Aquarium who narrates the tour.  She did an excellent job.

As we were cruising through San Diego Bay on our way out to the Pacific Ocean, we saw two dolphin swimming alongside another boat.

Here’s the USS Midway Museum we toured while the boys were here. 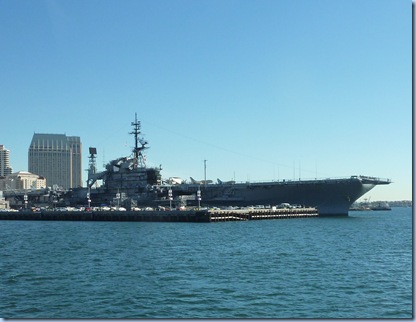 These sailboats were zipping along.  Aren’t they beautiful. 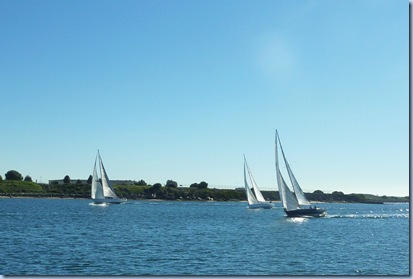 I never tire of the downtown skyline.  Today there was a cruise ship in port. 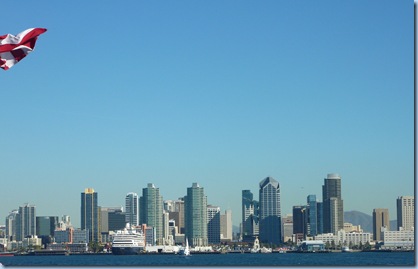 We saw many Navy helicopters and planes as well as several ships doing their thing.  These are Seahawk helicopters. 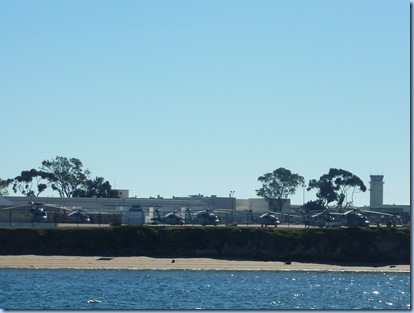 And here’s a nuclear submarine. Once we got out into the ocean, we saw five different whales.  Three were by themselves, and two were together.  We saw them blow water spouts and flip their tails.  They all looked quite large.  Here are a few facts we learned.

The whales migrate about 10,000 miles roundtrip each year covering approximately 100 miles per day.  A baby gray whale weighs 2,000 pounds at birth and is the size of a Volkswagen Beatle.  The gestation period is 12 to 13 months.  A gray whale can eat up to 2,400 pounds of food a day.  They live to be about 70 years old.  An adult is about 45 feet long and weighs 33 tons.

Gray whales were twice almost hunted to extinction.  There are now about 20,000 of them, and they have been removed from the endangered species list.  What a nice comeback they’ve made.

It was hard to get decent pictures.  I’ve made a collage of the ones I took.  The big picture in the middle is of two whales spouting next to each other.  You can click on the collage to see a bigger version.  Most of the pictures are of the spouts with a few tail flips. 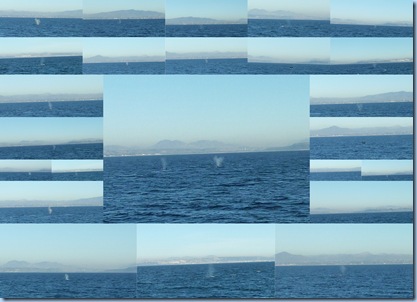 After the whales blew the water spout, they would kind of arch up out of the water a little bit, and we could see their backs.  It was a very cool sight to see.  The pictures don’t do it justice.  It was one of those experiences that you just had to be there to appreciate it.

I talked to a couple who went on the morning tour, and they saw a pod of about 1,000 dolphins.  Too bad we didn’t see them.  We did also see sea lions and lots of birds including this pelican. 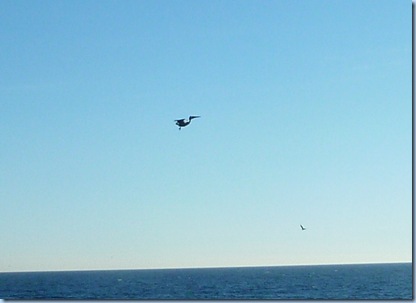 On the way back we passed Point Loma and the Cabrillo National Monument.  We visited there last week.  On the right side of the picture, you can see the original lighthouse that was built on top of the bluff.  On the left side of the picture was the second lighthouse built down near the shore.  This area is still used by the Coast Guard today.  Parts of the movie Top Gun were filmed there. 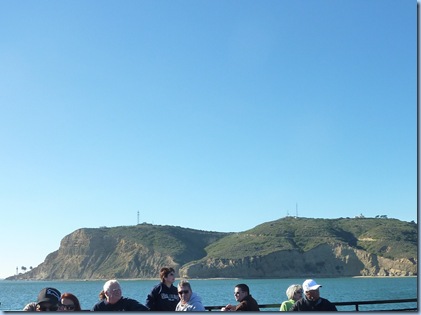 While we were waiting to board the ship, we walked to a park on the bay near the USS Midway.  There are several sculptures honoring the military in the park.  This one is of the famous picture taken in New York at the end of WWII.  It sure is big!

This is a tribute to Bob Hope. 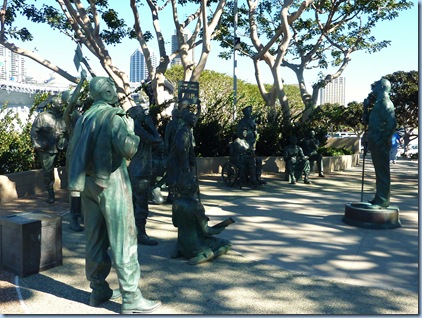 Today was a great day!!!

Posted by RV Khronicles of Kevelyn at 11:03 PM 4 comments: Links to this post