Since 1980, we've driven from Wisconsin to Florida five times to vacation. We've always been in a hurry to get there, so didn't stop much along the way. Each time I'd see the many billboards for Lookout Mountain and Rock City in Chattanooga, Tennessee. Now that we travel at a much more relaxed pace, I decided it was time to stop and explore. I did some research and purchased a triple pass for Rock City, Incline Railway and Ruby Falls.

Yesterday we started the day at the Incline Railway. With a grade of 72.7 percent, it is the world's steepest passenger railway known as "America's Most Amazing Mile"; and has been designated a National Historical and National Mechanical Engineering Landmark.

Here's the view from the bottom. The track runs through that narrow gap in the trees to the building at the top. 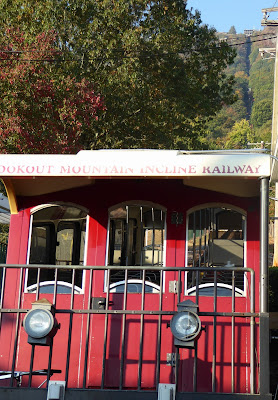 At the top is a building with some observations towers, a gift shop and an exhibit about the building and mechanics of the railway. It was originally built in 1895 and powered by steam engines. In 1911 it was converted to electrical power. Today, two 120 horsepower, electric engines power the trains. Huge wheels with cables move the train cars like a pulley system along the single track system. 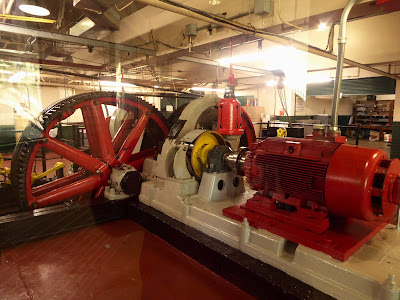 One car is going up while another is going down. Near the middle at the switch, the track splits into two to allow the trains to pass each other, and then goes back to a single track. 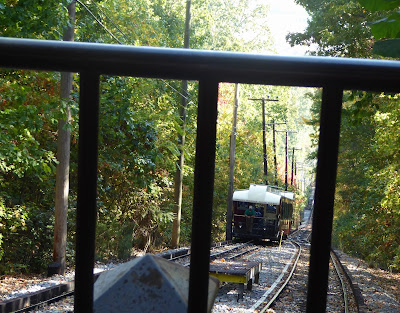 At the top, we walked a few blocks to Point Park, a National Military Park. Here the "Battle Above the Clouds" was fought in November of 1863. Chattanooga was considered the gateway to the Confederacy because of the Tennessee River and railroads that carried supplies. The Union army was victorious and this battle was later considered the death knell of the Confederacy.

Inside the Visitor Center is a huge mural depicting "The Battle of Lookout Mountain". It measures 13 feet tall, 30 feet wide and weighs 700 pounds. 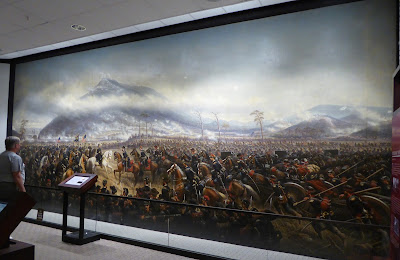 Here's a view of a train heading back down the track. 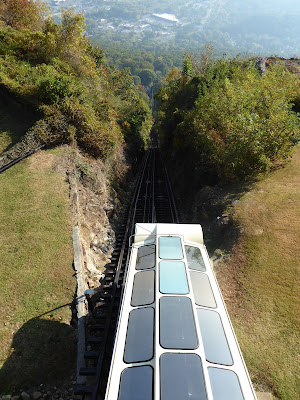 The fall color is not that great in this area. Many of the trees are still green. Chattanooga is on track for the driest year in history; October will be the driest on record. There are burn bans and a drought; so far 18 inches below average rainfall. Of the five days we will be here, three of them will set record warm temperatures. Strange weather all over the country.

Our next stop was Ruby Falls. Several of my Facebook friends had recommended we do this tour, and I'm glad we did. Ruby Falls is America's tallest and deepest underground waterfall open to the public. You descend 260 feet by elevator and then walk about one-half mile into the mountain. The waterfall is 1,120 feet below the top of Lookout Mountain.

Along the way our tour guide pointed out many interesting formations and shared how they are formed. We've been to several caves, so that part was okay, but nothing new for us.

In 1928 Leo Lambert and some fellow explorers had blasted a shaft into Lookout Mountain looking for a cave. They spent 17 hours on their hands and knees exploring the cavern they discovered. They were awestruck by the waterfall they found at the deepest point. Leo later named the falls in honor of his wife, Ruby. 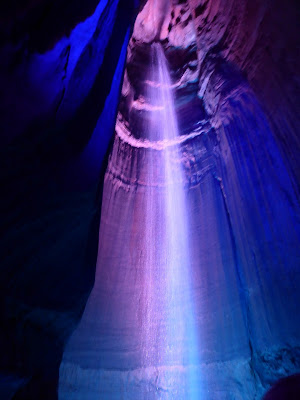 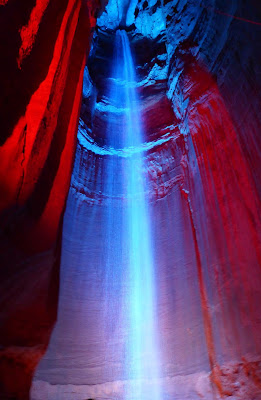 The pool at the bottom has lights which create different colors. Ruby Falls is 145 feet tall. It was a spectacular sight. You can hear the water as you get closer. As you arrive, it is dark until the guide turns on the lights, to give you the full effect of the amazing experience. 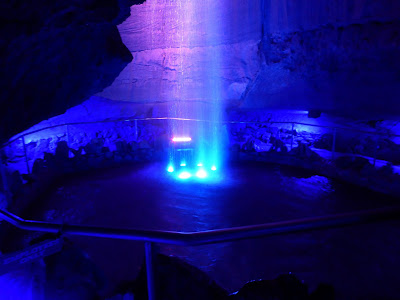 The visitor center building at the top is modeled after a 15th century Irish castle and was constructed from the limestone reclaimed from the elevator excavation in the 1920s. Ruby Falls is on the National Register of Historic Places. 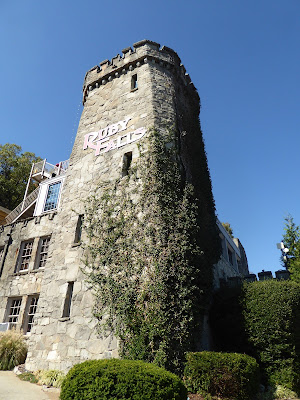 The views from the top of the tower of Chattanooga were great, although it was a bit hazy. 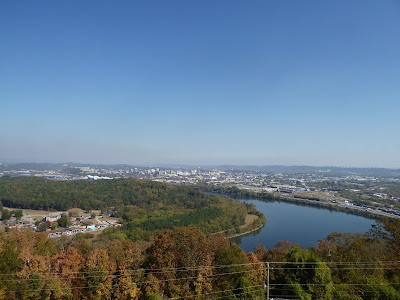 We are staying at Holiday Travel Park in Georgia, just across the border of Tennessee. The park is built on land that was a battlefield in 1863. There is a monument to the 84th Indiana Volunteer Regiment that was placed here after the Civil War by some of the men of that regiment. The date is September 19, 1863. 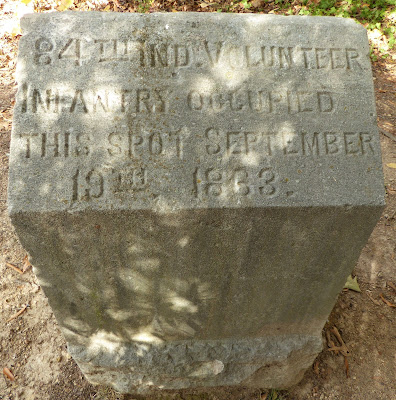 We saw another tiny house; that makes three so far since we left Wisconsin. It seems the tiny house movement is really catching on! It had a plaque on it for the Tumbleweed Tiny House Company. I did a little research on them. Their factory is located in Colorado. Makes you wonder how this tiny house ended up at a campground in Chattanooga. 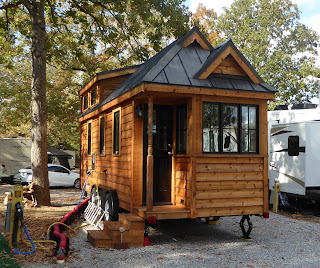 Don’t wish upon a star – Reach for one!
Posted by RV Khronicles of Kevelyn at 6:55 AM No comments: Links to this post