While researching things to do in this area, I came across Bush's Visitor Center in Chestnut Hill, Tennessee. Yesterday we drove through some very windy roads to get there.

Bush Brothers and Company makes those famous Bush's Beans. Their company is located in a rural area in the foothills of eastern Tennessee where the family has been doing business for four generations. They started in the late 1800s as a small canning company and have grown into a huge corporation.

There are several plants. This is a photo of the plant in their original location.

We watched a very informative movie of the history of the company and family, and also how the beans are processed. We then walked through a museum area. I didn't know the company has a connection to Wisconsin. In 1962 they purchased a canning company in Augusta, Wisconsin. Condon Bush was sent there to run it. The plant wasn't doing well, and Condon needed something to improve operations. He came up with Bush's Original Baked Beans from a secret old family recipe.  The rest, as they say, is history. The company went from a canning company of all kinds of vegetables to a baked bean company. It sure was a profitable decision.

At the end of the museum area, they take your picture with the famous dog Duke from the commercials. (It's a backdrop, Duke isn't really there.) All of this is free of charge. 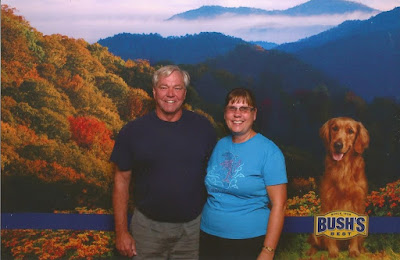 Outside is this truck, which is also seen in the commercials. 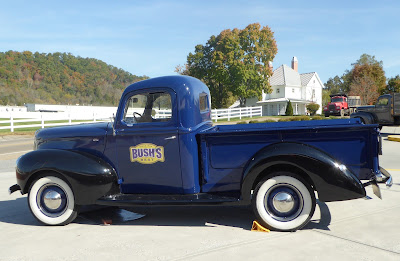 There was a general store with all kinds of items for sale. There is also a cafe on the grounds with lots of bean dishes on the menu. One of the items they suggested trying was pinto bean pie.  I got a piece to go and tried it later. It tastes kind of like pecan pie, but you can definitely taste the beans. It was okay, but I doubt I would eat it again. 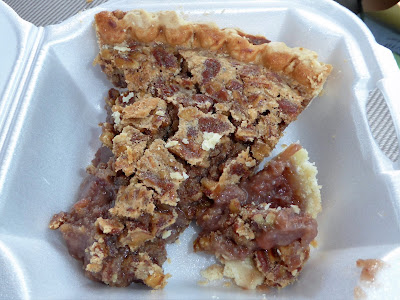 There were lots of people at the visitor center. I guess I'm not the only one who enjoys these quirky kind of touristy things. The rest of the day we spent wandering. We stopped at a quilt shop in Sevierville, but I didn't find anything. We also stopped at an Amish craft market, Bass Pro and a few other shops. Eagle Springs Winery offered free tasting, so we had a few samples. Their wine is made with grapes grown in Tennessee. Some of them have honey in them. Their Pride of the South was very tasty, so I bought a bottle for my mom.

Today we move further south to Chattanooga for the weekend. The weather has been fantastic since we left Wisconsin. It's actually supposed to be in the 80s for the next few days.

Don’t wish upon a star – Reach for one!
Posted by RV Khronicles of Kevelyn at 6:28 AM No comments: