Since arriving in Texas over a week ago, we’ve experienced rain, clouds and very cool temperatures with highs barely making it to 50 degrees most days. So, we haven’t been doing too much outdoor activity.
We arrived in Mission, Texas at Americana RV Resort on January 3rd. Calling it a resort is stretching it. They do have a pretty nice clubhouse, laundry room, a small pool and hot tub and horseshoe pits. There is a mix of park models and RVs. Its an older park and is in need of some updating. The cost for a premium site is $502 a month plus electricity.
With the premium site we have a larger FHU, 50 amp site with a nice concrete patio. 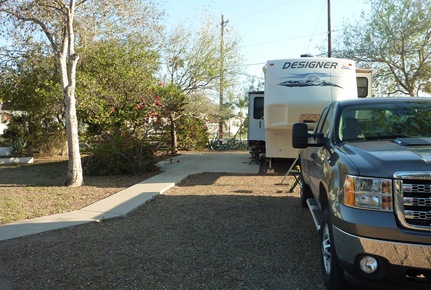 We even have our own grapefruit tree and some flowering bushes. Unfortunately, our site is next to a pretty busy road so we have plenty of noise. Its an okay place, but we probably wouldn’t come back. 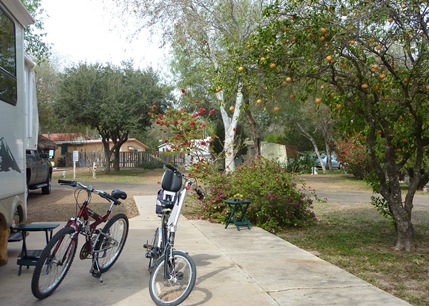 The forecast for Sunday was sun by the afternoon and a high of 65 degrees. We were pretty sick of hanging out inside so we decided to go to the Santa Ana National Wildlife Refuge near Alamo, Texas which is about 25 miles from us. This refuge is about 2,000 acres in size and has over 400 species of birds and 250 species of butterflies. It is often referred to as the jewel of the National Wildlife Refuge System.
We arrived at 11:00 am. They have three tram tours on Sunday so we bought tickets for the noon tour. The cost was $3.50 for seniors 55 or over. The first Sunday of the month is a free admission day to the refuge, so we saved the $3 per vehicle admission fee.
While waiting for the tram tour, we watched the interesting twelve minute movie in the Visitor Center and then explored the exhibits. There was a bird feeding station outside where we saw some Red Winged Blackbirds and a Chachalaca which is quite a large bird. 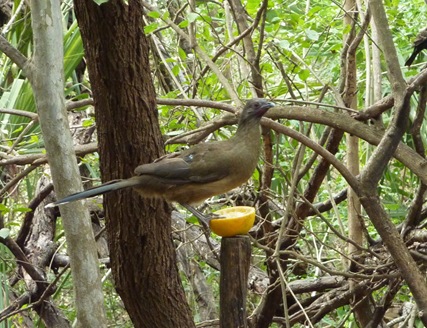 Our tram guide and driver were the volunteer husband and wife team of Keith and Gail. They did a fine job sharing information with us on the 1.5 hour tour.
Our first stop was a newer 40 foot observation tower. From the top you can see the canopy of the trees. In the distance is Mexico. In fact, one of the people on our tour had a message on their cell phone that they were picking up International cell towers. Keep your cell phones turned off on the tour! 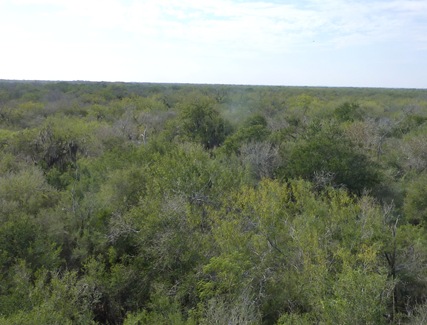 Next to the tower is are two platforms with a rope bridge connecting them. I bet kids love this. 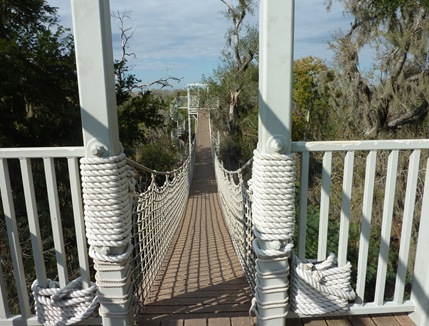 The second stop on the tour was Cemeterio Viejo. 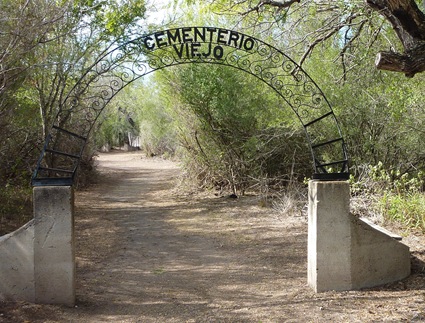 The refuge was originally partially within a Mexican Land Grant given to rancher Benigno Leal. The ranch had its own cemetery which has been preserved. There are about 30 unmarked graves which probably belonged to workers and/or family members. There is a large stone tomb which holds the bodies of Benigno’s son and wife. Some of the graves are still visited by descendants. 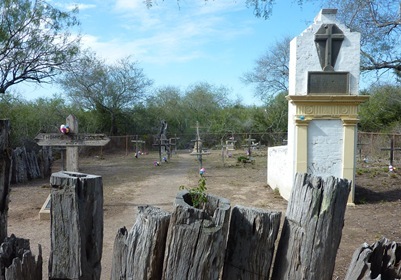 The large cross on the left is a marker for the grave of Thomas Jones, a surveyor who drowned in the Rio Grande and was buried in this cemetery. The wood fence surrounding the cemetery is made from native ebony wood which is a very hard wood. Some of the logs are over 100 years old.
Near the end of the tram tour we saw an Indigo Snake which was probably about 4 or 5 feet long on the side of a levy. It slithered into the underbrush before I could get a picture. These snakes are common to the refuge and are not dangerous to humans. Texas farmers love the snakes because they eat rattlesnakes. I’m glad I saw it from the tram. I wouldn’t have wanted to come across it while walking on the trails.
After our ride we walked several of the trails covering a few miles. We saw quite a few ducks and American Coots on the Pintail Lakes trail. 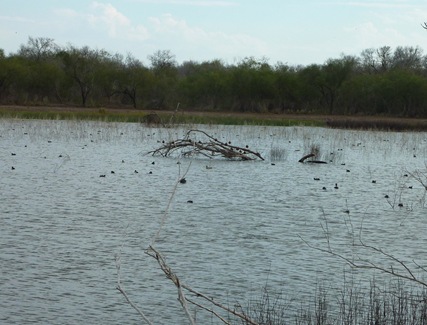 We saw some new birds for us on our walk including these Black Necked Stilts. 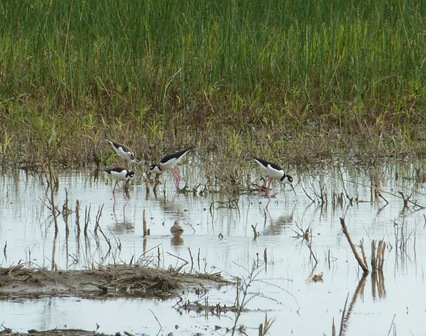 And this Great Kiskadee. (Thanks to Tiffany at the Visitor Center for helping with the identification.) Cool beans as Judy would say! 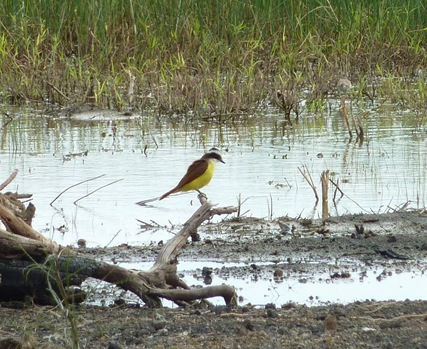 A little further down the trail we got our first glimpse of the Rio Grande River. That’s Mexico on the other side. 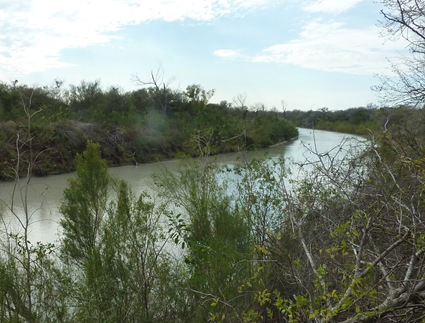 This inter tube was laying along the banks of the river. I’m guessing it was used to swim across. 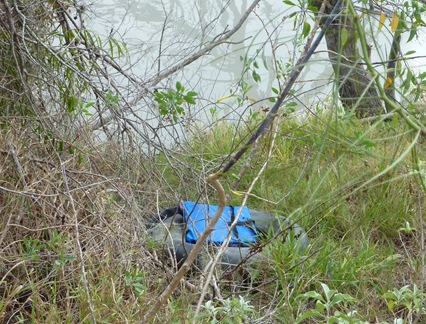 There was a photo blind on one of the trails. There wasn’t a bird in sight. Probably because there wasn’t any food or water at the feeder. I asked about this back at the visitor center. They said the food is put out in the morning and they’ve eaten it all by afternoon. The water feature is being repaired. 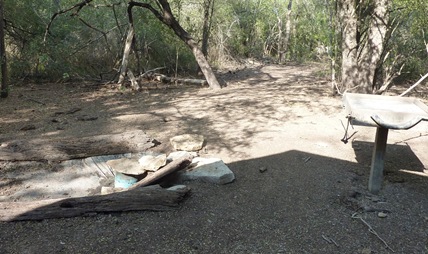 We’re thinking we will go back to the refuge later in the month. This time we’ll arrive earlier when they put out the food at the feeding stations. The workers at the center told us there are always Green Jays at the feeders early in the day, and I really want to see one. They look so pretty in the pictures.
While in Texas we’ve seen some type of police towers several times in shopping center parking lots. Anyone know what these are about? 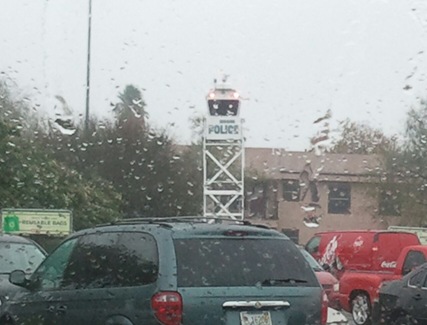 Today is forecast to be sunny and near 70 degrees so we’re going to do some bike exploring.
Don’t wish upon a star – Reach for one!
Posted by RV Khronicles of Kevelyn at 1:05 PM 3 comments: