We left Iowa yesterday morning, and drove for about 7 hours to Hillsdale State Park in Kansas. We encountered some rain a few times, but it wasn’t too bad. We both prefer shorter travel days, but I had checked out this park online, and it looked very nice. So, Kevin drove a few extra hours so we could spend 2 nights here.

I’m so glad he did. This is a great park. I’d say one of the nicest we’ve stayed at. It is situated along the shores of a reservoir that was built as part of a flood control plan in the 1980s. There are 200 campsites in 6 different camping loops, with 3/4 of them having electric and water hook-ups. The fall camping fee was $20.20 per night, which included the daily fee for park entrance.

We’re in the Scott Creek loop. That’s Scott Creek behind our site. We have a fantastic view out of our back window. When the reservoir was built, 70 percent of the standing timber was left to provide fish habitat. That’s why you can see dead trees sticking out of the water. 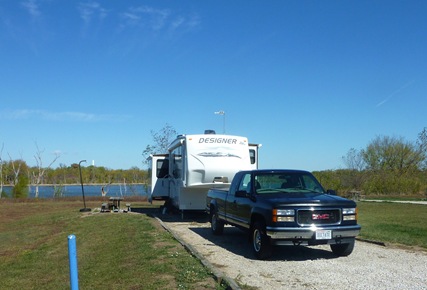 Each site has a pole cemented into a tire with a hook on the end. It’s to the left of the picnic table in the picture. We can’t figure out what the poles are for.

The park is huge with just under 3,000 acres. In addition to the camping, there are 2 beaches, shelters, hiking and biking trails, boat launches, fishing and a marina. This morning we hiked for 2 hours. After lunch we rode our bikes for an hour. Trying to condition our bodies for those long hours on our feet at Amazon.

Here’s one of the beaches. Today was a beautiful day with highs in the mid 70s, but the beach was empty except for a few geese. The marina is to the right. I saw this huge wasp or hornet on the sand. It had to be at least 3 inches long. I’ve never seen a wasp or bee this big, it was scary looking. 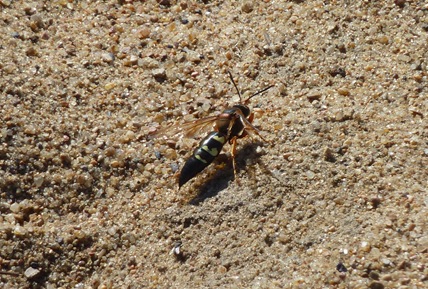 The hiking trail loops around the water, and so we saw our camper from across the creek. That’s our home in the middle. 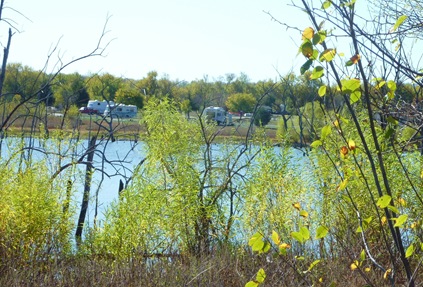 There were many trees with these large green balls growing on them. We don’t know what they’re called. However, several years ago when we were in Amana, Iowa, one of the shops was selling these balls. Supposedly, they keep spiders out of your basement. At that time, I bought some and put them in the basement at home. I can’t really say I noticed a difference in the amount of spiders we had down there that year. 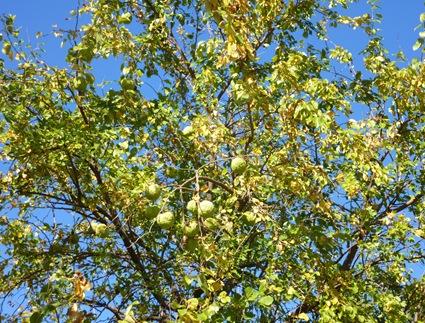 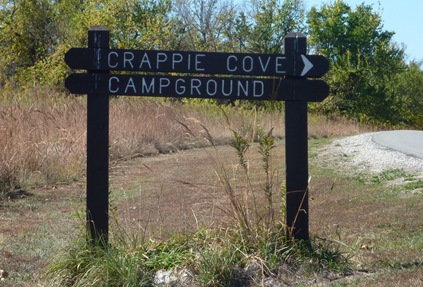 It’s for one of the other camping loops. We realize that it’s referring to the fish; but at first glance, it made us think of crappie, as in something is crummy or nasty.

It was a pleasant surprise to discover that one of the camping loops actually has a small laundry room with 2 washers and 2 dryers. I was able to wash all of our dirty clothes, so we won’t have to think about it during our first week at Amazon.

As I said, we really like it here, and definitely would come back again. Tomorrow we head to Coffeyville. It’s only about 100 miles from here, so it will be a short travel day.

Posted by RV Khronicles of Kevelyn at 7:01 PM 6 comments: Links to this post