As we were leaving Fort Pierce, the sun was shining through the pine needles on our site. It made for a very pretty picture. 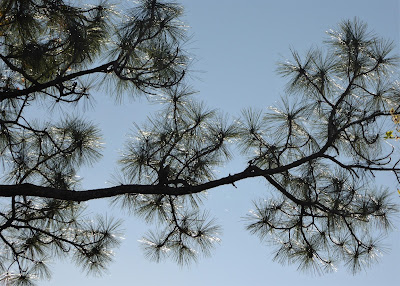 Our drive to Naples along I-75 across south Florida was quite interesting. This stretch is known as Alligator Alley. I saw at least two dozen alligators along the canals and lots of birds. We arrived at Rock Creek RV Resort, checked in and were escorted to our site. This RV park is very nicely maintained with beautiful landscaping. Sites are paved, but very tight. It feels like everyone got in here with a shoe horn. There is a pool and rec hall with some scheduled activities, but nothing else.

The park is right next to Naples Municipal airport which makes for some noise, but not too bad. Last weekend they had a fly-in event with old military planes. There is a covered platform where people can watch the planes land and take off and even hear them talk to the control tower. Pretty interesting. Here are some planes we saw last weekend. Naples seems to be an area with many wealthy people, so there are lots of small planes using this airport. Some of the corporate jets are pretty large. 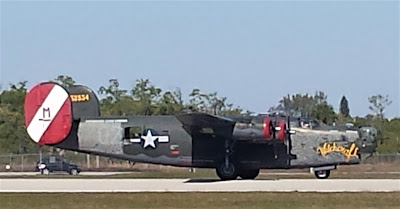 We met a nice man named Phil here in the park who takes people on bike rides around Naples. He seems to know every path and back road to get around on bikes. We've done two rides with him from 8 to 12 miles, and have seen lots of different areas. Phil knows a great deal about the Naples area. Such a nice guy to voluntarily do these bike rides.

Yesterday was a beautiful day for a boat trip. I had booked a 1.5 hour scenic ride through Pure Naples using Groupon, allowing us to enjoy the trip for half price. We sailed through Naples Bay and out into the Gulf for a little bit. Our guide told us about some of the history of Naples and talked about the many expensive homes we were seeing.

This house used to belong to Steven Spielberg. These communities on the water are not gated, so most of the mansions are not owned by celebrities, but rather business owners who are not easily recognized by the public. 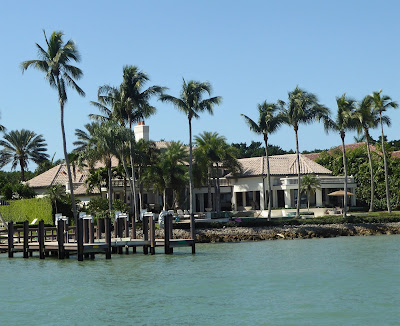 Here's a new build for only $22.6 million. Can you see the for sale sign on the lawn? Only about 12 percent of these homes are occupied full time. Most of them are only used 2 to 4 weeks out of the year by the owners, but have full time staffs year round to care for them. A whole world we cannot relate to. 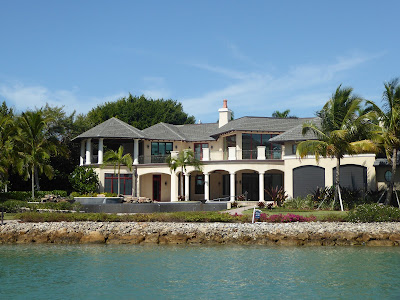 One of the homes had a 130 foot yacht parked at the dock. Everyone needs one of those. The name on the ship says a lot about the owner in my opinion. 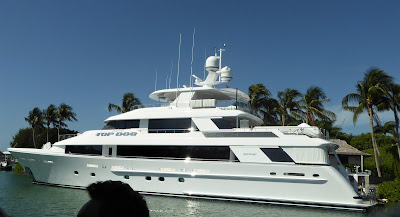 This one is owned by the people who own the Play-Doh company. 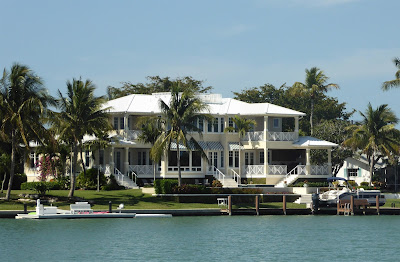 This is the most expensive home in Port Royale, the most exclusive area of Naples. It is assessed at $50 million and has a 30,000 square foot main house and a 10,000 square foot guest house. Property taxes are $450,000 a year. It's owned by the owner of the seventh largest investment firm in the country. I forgot the name of it. 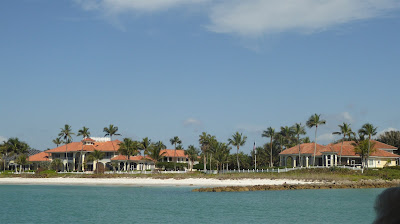 These people also own two more 30,000 square foot homes across the channel because they have 13 children and 90 grand and great grandchildren so need those extra houses.

Of course, yachts need a place to park. The private marina can help you with that. Slips are not rented, but rather sold at a cost of $500,000 to over $1 million. That's just the parking spot, not including the cost of the ship. 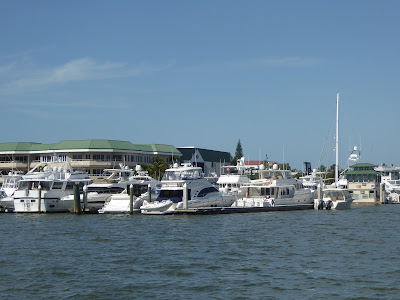 If you can't afford one of those boat slips, there are boat parking garages available. You can see a boat being put into the water with a large fork lift in the picture below. In the background are the storage buildings with several floors of stored boats. 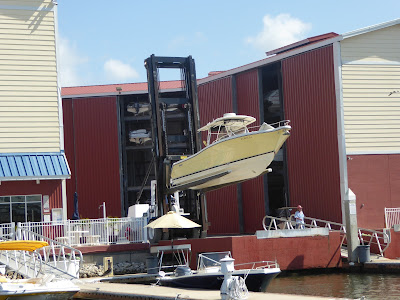 There were quite a few unoccupied islands along the way covered in mangrove trees. They grow in salt water and are only found in tropical areas. 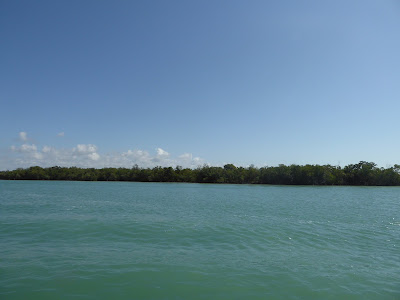 We enjoyed our boat tour and even saw several dolphin along the way. They were too quick to get a picture.

We've been enjoying visiting with our friends Ralph and Ann, Al and Joan and Dick and Wanda while we're here. The weather has been awesome, and we are often found in the pool in the afternoon. Today Kevin, Ralph and I are going golfing. Most courses in Naples are very expensive, but we found an executive course on Golf Now for an acceptable price. We'll see how it goes.

Posted by RV Khronicles of Kevelyn at 6:48 AM 2 comments: Links to this post