Yesterday we drove to the north end of Death Valley National Park to take a tour of Scotty’s Castle.  What an interesting place in the middle of the desert! 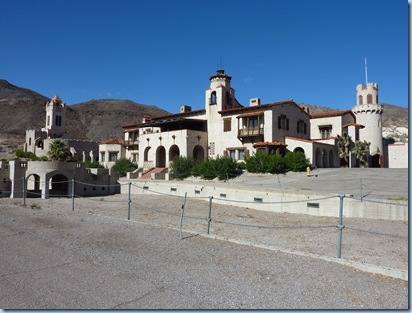 This home was built between 1922 and 1931 as a vacation home by Albert and Bessie Johnson.  You’re probably wondering why is it then called Scotty’s Castle.  The story could easily be right out of a novel.

Walter Scott “Scotty” was quite a character.   In the early 1900s he was selling shares in a gold mine that didn’t exist.  As investors in the west grew wise to him, he expanded his search to other cities.  He convinced Albert Johnson of Chicago to invest in his fictitious gold mine.  After two years of no returns, Albert decided to visit Scotty in Nevada to see the mine.  He never did see a mine, but he fell in love with Death Valley and found Scotty to be very entertaining.  Albert decided to build a vacation home in the desert.  By the time he was finished, he had spent 2 million dollars.

Scotty stayed with the Johnson’s at their home when they came to Nevada.  He told many stories to their guests including the fact that he owned the home and Albert was his banker.  The Johnsons went along with the story so the press wouldn’t bother them.

Albert used his engineering background to build the home with electricity, indoor plumbing, an electric refrigerator, and all the newest innovations of the time.  He used water from a nearby spring to create the electricity.  I was amazed by the many modern conveniences in a house build in the 1920s!

The National Park Service offers two tours at the house.  One tour is of the inside of the house and the other is an underground tour in the tunnels under the house to see how everything worked.  Both tours were very informative and enjoyable.

Here’s a view of the entire compound including a cook house, guest house, a clock tower and stables.  It’s set in a valley surrounded by mountains on all four sides. 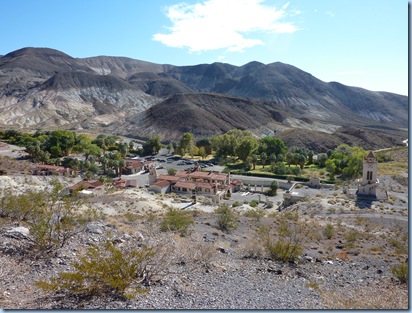 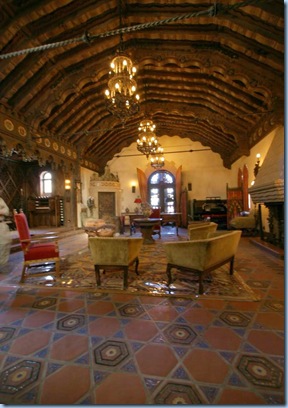 The Johnsons enjoyed music so they built a music room at the cost of $200,000.  The main instrument was a pipe organ.  Neither one of them could play the instruments, so they had paper rolls of music which played the organ and piano.  We were given a demonstration of the instruments playing, and it was quite impressive. 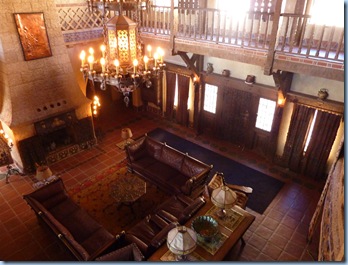 This is the main living room.

The Johnsons lost a lot of money during The Depression so they were not able to finish all of the projects they had started including a large swimming pool made to look like a moat at the front of the house.  They also began renting out rooms to bring in some revenue.  Some of their guests included President Hoover, Clark Gable, Will Rogers, Betty Grable and Betty Davis.

We were walking along a path on the grounds and we heard a noise.  It sounded like crickets to me.  Kevin looked down and saw a rattle snake under a little bush along the side of the path.  Yikes!!! I’ve never seen a rattle snake other than at the zoo.  I am going to be very careful walking around the desert from now on!!  Can you see his tongue sticking out? 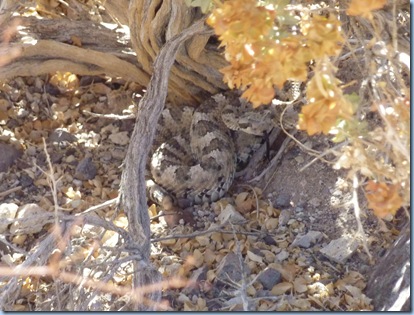 We took a drive up to the Ubehebe Crater.  About 2,000 years ago this volcano blew it’s top and the result was this crater.  It’s the largest such crater in the park.  It’s a half mile across and 500 feet deep.  The explosion spewed rocks over a six square mile area. 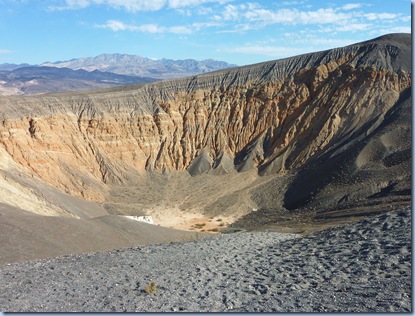 A cold front moved through yesterday afternoon.  It was extremely windy and it even rained!  This area is only supposed to get about 3 inches of rain a year.  I think we got a good part of that last night.  It’s much cooler today, only a high of 64.  It’s supposed to be in the 70s this week; perfect! 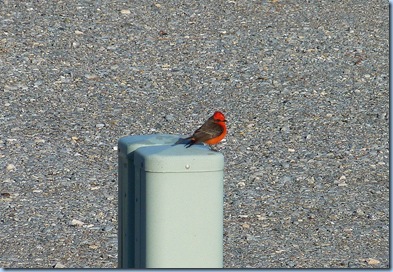 This morning I saw this little bird sitting on the electric box outside of our window.  I did some research and think it’s a Vermilion Flycatcher, but that’s just a guess.  If anyone knows for sure, please let me know.

Posted by RV Khronicles of Kevelyn at 6:48 PM No comments: Links to this post