As I’ve said before, most of the campers we have at the park are nice people and don’t cause any trouble. This weekend we had a few interesting episodes happen.

The biggest problem was with a person who lives near the park and wasn’t even camping here. He was visiting some people who were camped in the park. We first noticed him as he went speeding past the 5 mph sign at the entrance. Then he parked his vehicle on the grass of the site next to his friends.

Kevin went down and asked him to park in the parking lot and not on someone else’s site. He came speeding back down the entrance road and turned into the parking area with his tires squealing. I am not exaggerating. Kevin asked him if he knew the speed limit was 5 mph. He said he did and we shouldn’t drive on his road. Not sure what that meant. Then he told Kevin to kiss his a##. Seriously.

He left a short time later, and we noticed his friends walked over to his house the rest of the weekend. Hopefully, he’ll stay out of the park. Who needs that type of neighbor.

The site right next to us was occupied by a couple with an old Starcraft pop-up camper. When they arrived, the camper was held together with quite a few bungee cords. I try not to judge, because everyone has their own situation, and at least they were able to come out and enjoy the weekend.

The hawks are still in the park and entertaining to watch. Yesterday one of them was perched near the top of the tree in front of our RV. We’ve noticed in the past that lots of little birds will mob the hawks in flight and perched in trees.

I did a little research and there is actually a term for this behavior. It is called mobbing. The main reason is believed to be that the little birds are trying to keep the hawks away from their nests and babies.

Here are a few pictures I managed to get of some black birds and red-winged blackbirds pestering the hawk. The hawk is definitely aware of them, but doesn’t seem to waste any effort chasing them away. 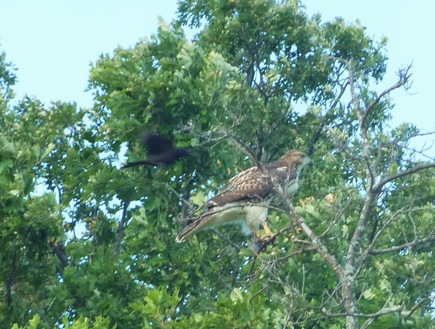 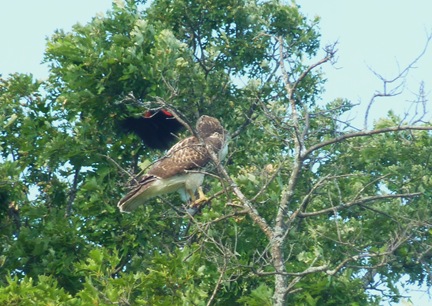 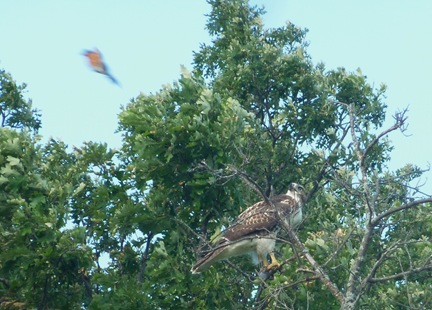 It was hard to get a good picture since the little birds fly by very quickly. I find watching these birds quite fascinating.

While I was trying to get pictures of the hawk, these white pelicans flew overhead. They are so beautiful in flight. 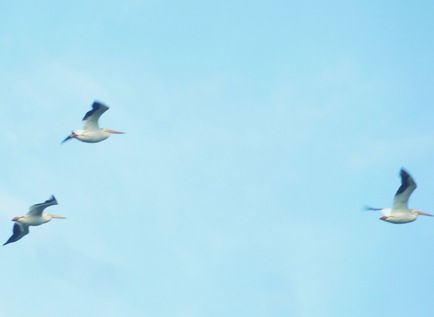 Last weekend we met a very nice couple that are also neighbors of the park. They are Tim and Pam and have a home in Wauwatosa, but also have a summer home on the lake across from the park. Tim is spending a lot of time this summer rebuilding their house on the lake. It’s quite an undertaking. He sure is ambitious.

We’ve gotten to know him as we go by his home on our walks. We’d stop and visit a bit and check on his progress. As we got to know him better, he told us he brews his own beers. Last Saturday Tim and Pam came over. He brought four bottles of his home brew and set up a tasting table for Kevin including the glasses. It’s quite the production. He even makes his own labels. 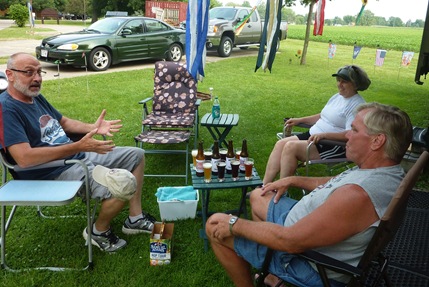 Kevin said all of the beers were very good. I’m not a beer fan, but it was interesting to hear the process of how he makes these beers. One of them was the recipe from the White House. Yup, they brew beer at the White House.

On Sunday they took us out on their pontoon boat, and we toured the eastern half of the lake. We plan to go out again to see the western half. It’s quite a long lake.

So, just as in our life when we owned a house, you have some good neighbors and some bad ones. I’m glad we got to meet the good ones. We’re looking forward to spending more time with them!

We had some severe thunderstorms come through overnight. I was up from 2:30 to 5:00 am watching the radar and turning off the weather radio every time it went off. We got almost two inches of rain in about two hours, and have some small branches scattered about. Astico Park, another Dodge County campground, had lots of damage and trees down. There was a tornado warning for them, so that may have been what caused the damage. They’re only about 20 minutes from us. More trees to use as firewood in the parks.

Posted by RV Khronicles of Kevelyn at 8:11 AM 2 comments: Links to this post