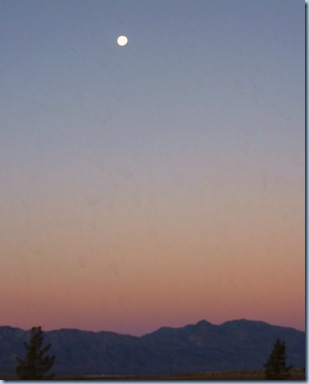 There was another beautiful sunrise yesterday morning with the full moon over the mountains.  I never tire of these moments.

Remember the days when you went to gas up and there would be an attendant that would fill your tank, wash your windows and check your oil?  You wouldn’t even have to get out of the car.

We stopped at a gas station yesterday in Nevada that had a different kind of full service idea. 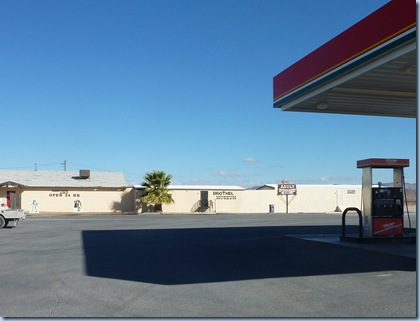 On the left there’s a red light on the roof, a red light above the door, a red door, an intercom to get buzzed in, it’s open 24 hours, and it’s called Cherry Patch Ranch.  I think you can guess the services provided.  Next to there is the Brothel Museum, and then the door on the far right is label Trucker Showers.  Seems they’ve pretty much got all the bases covered.  We’ve seen some really unusual places in our travels so far.

We arrived in Vegas around noon and met Janie and John who write the blog Flamingo on a Stick at Jimmy Buffett’s Margaritaville Restaurant in the Flamingo Hotel and Casino.  We had a very enjoyable time with them.  It was so nice to meet them.  We discovered we have a lot in common.  What great people.  I had planned on taking a picture, but we did so much chatting that I completely forgot about the picture.

I ordered the Cheeseburger in Paradise.  It came with fries and a pickle.  I wasn’t all that impressed.  The food was OK, but a bit expensive.  The margarita was good, though :)

We spent the rest of the day and evening wandering up and down the Strip.  We’ve been to Vegas before, but there’s always something new to see.  And the people watching can’t be beat.  We spotted two Elvis’s, one Marilyn Monroe, one Star Wars Storm Trooper, and a few people who were dressed up as something that defies description.  What were they thinking!

My favorite thing to see in Vegas is the fountains at the Bellagio.  I could watch this show over and over and over again.  It was very windy so the evening shows were cancelled.  We did catch a daytime show. 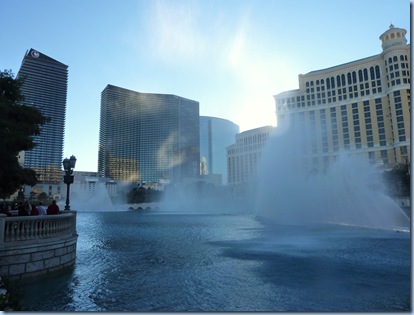 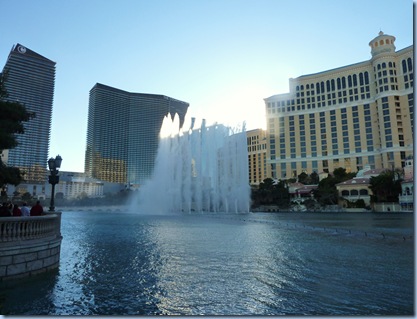 A new hotel called The Cosmopolitan will open on December 15th.  It looks quite fancy.  Next to it were these two buildings.  Don’t they look like they could fall over any minute.  Very interesting architecture. 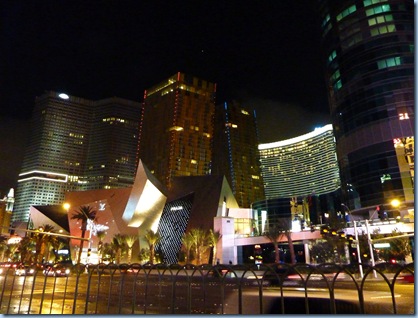 The large silver building in the front is a Prada store.  There are so many designer shops in Vegas.  Who shops at all of these places?  Obviously, there are still people with money to burn.  Our big purchases were some candy at the M & M’s store and dollar margaritas.  I love a good deal :)

Kevin spent a few hours in the casino after I went to bed.  He’s not up yet, but he didn’t wake me when he got back to tell me we’re rich, so I’m thinking he didn’t win big.  Maybe tonight :)

Posted by RV Khronicles of Kevelyn at 10:55 AM 2 comments: Links to this post