When we arrived at this park, I noticed some trees that looked like they had black olives growing on them.  I picked one and tasted it.  It tasted very bitter, definitely not like any olive I’ve eaten.  So, I thought maybe they weren’t olives. 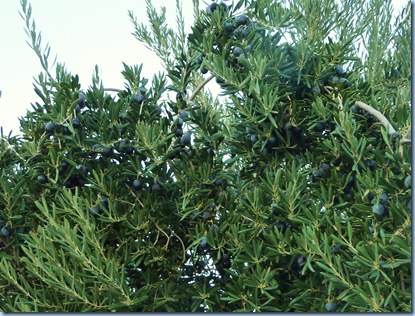 I did a little research and learned all about olives.  Green olives are picked before they are ripe.  If the fruit is left on the tree to ripen, they become black olives.  All olives taste bitter fresh off the tree.  They are processed in a lye brine before they are sold.  I never knew any of this.  This fulltime lifestyle is quite educational.

Yesterday we went to a street fair in Palm Desert.  It was held in the parking lot of the College of the Desert.  I would estimate there were at least 100 or more vendors.  It was a combination arts and crafts fair and flee market.

There were some very beautiful artistic pieces including photography, painting, metal sculpture and pottery.  There were also quite a few booths selling the typical flee market stuff; casual clothing, sunglasses, gadgets, healing magnetic jewelry, and many types of other jewelry.

I think people around here must really love their pets.  There were at least ten different vendors selling pet items; clothing, carriers, strollers, toys, beds and anything you can imagine your dog or cat could need.

I heard there was produce available at the fair.  There were several produce vendors, but the fruits and vegetables had stickers on them just like in the grocery store.  I don’t think any of it was local.  I figured it wasn’t any fresher, and the prices were mostly more than in the store.

I did get a lemonade and Kevin bought one of those magic mats that keep your stuff from sliding around on the dashboard.  We put the satellite radio and cell phone on it, and they are staying put.  It works great!

We stopped in at Best Buy to check out the ereaders.  I’m thinking of getting one since I found out I can download eBooks through my library card for free.  This was just a fact-finding mission.  I haven’t completely decided yet.

My main hesitation is that the loan period is only 7 days, and I don’t usually finish a book that quickly.  I know I can check it back out, but most of the books I was interested in had to be put on hold so it could be a while before I could check it out again.  I wish the lending time was longer.  The same library lets you check out the paper books for four weeks.

We did a quick grocery stop and rented The Expendables at Redbox.  It was OK, but a bit too bloody for my taste.  But what was I expecting from Sylvester Stallone.

We’re getting into the habit of swimming every afternoon.  Today was in the 80s so we spent some time at the pool after the Packer game.  Kevin wasn’t happy they lost :(

I hope all of our Midwestern family and friends survived the blizzard.  We are not missing dealing with snow removal or cold weather.

Have I mentioned that we love our new lifestyle :)

Posted by RV Khronicles of Kevelyn at 6:57 PM 4 comments: Links to this post