I thought I was done with home remodeling projects when we sold our house.  But, I have volunteered to do some more projects.

Our son, Eric, bought a house about 2-1/2 years ago.  Both of the bathrooms were wallpapered in floral patterns which is not at all his style.  Since I have time to help him, and he has been so very helpful by allowing us to use his address as our mailing address, I offered to strip the wallpaper and paint those rooms for  him.

What was I thinking. 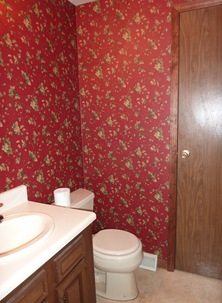 I began yesterday in the half bath.  Here’s a before picture.  I started peeling the wallpaper, and was pleasantly surprised how easily it came off.  Until I noticed, there was another layer underneath.  So, I pulled off the top layer in no time. 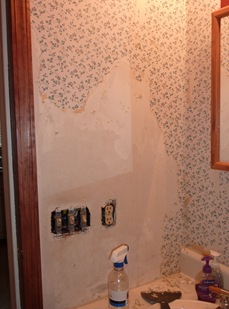 Then I started on the second layer.  It had been glued directly onto the drywall.  It wasn’t coming off easily at all.

I decided to drive to Home Depot and buy a wallpaper scraper.  I had seen a cool tool on HGTV for removing wallpaper so I wanted to see what I could find to make the job easier.  I found the Paper Tiger Scoring Tool for $8.  What a great tool.  It has sharp little wheels that score the paper.  Then you wet it thoroughly, and the top layer peels off. Wet it again and the bottom paper layer comes off.

Of course, spraying water on it is getting the drywall wet, and some of the drywall paper is coming off, too.  Luckily, Eric has a good friend who used to be in construction work.  He will put a layer of drywall mud over the walls after I’m done and then we can prime and paint.  Then, I can start the process all over again in the other bathroom.

We’re about an hour away from Eric’s house so my plan is to drive in once a week and spend a day working.  These bathrooms may take me the whole summer.

The weather has been improving.  It’s still been pretty rainy, but we’ve also had a few nice days.  Kevin was actually able to go out with friends and golf on Tuesday and today.   The rest of the week he was getting his lawn mowing duties done between rain showers.  All of this rain sure is making the grass grow!

I hung a bird feeder on my shepherd's hook and have been enjoying watching the birds.  It’s pretty low to the ground.  I’m going to get a taller hook.  The red-winged blackbirds just sit on the ground and eat the bird food. 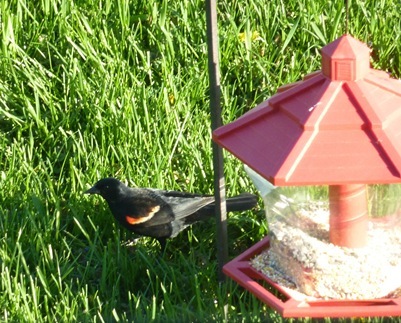 Some seeds are starting to sprout in my garden.  I’ve seen some robins pecking around in there.  I think they’ve broken off some of the sprouts so I’m going to put some netting over it.  No rabbits so far, but now it’s robins.