The heat and  humidity have finally left town.  This entire week is predicted to be highs in the low 80s and dew points in the upper 50s.  What a relief.  I’m so excited to be able to finally open the windows and doors and turn off the A/C.  We had a few storms roll through on Friday.  There was a beautiful double rainbow Friday evening.  It was still raining out, so the picture is through our back window with raindrops on the glass.  Now, the mosquitoes need to leave town!! 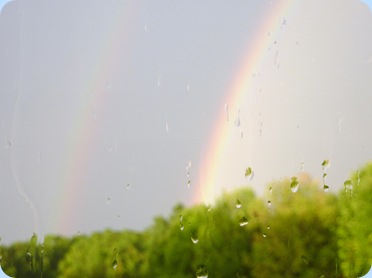 Our son, Eric, is also breathing a sigh of relief.  He’s been extremely busy this summer.  To top it off, his own A/C died, so he had to replace it as well.  At least he could do it himself, and he didn’t have to wait for a service person.  Some customers have been waiting days because all the HVAC companies were swamped.

Kevin had a great time at the PGA tournament on Thursday.  They didn’t allow cameras or cell phones, so he didn’t get any pictures.  One guy behind Kevin took a picture.  The marshal confiscated his camera immediately.  Supposedly, they don’t give you the camera back.  Definitely, not worth the risk.

There was a 3 hour and 10 minute fog delay that morning.  They got to the 17th green, which is where they thought they would have a good view of the golfers for the entire hole, at 7:15 a.m.  They didn’t see the first golfer come through until about 12:05 p.m.  Luckily, they had stools to sit on.  The PGA has rules about what kind of chairs you can bring in; no arms or backs.  Also, they allowed water to be brought in.  Normally, they don’t allow it, but because of the hot weather, they suspended that rule.  However, it had to be AquaFina water only.  If it wasn’t, there could be no label.  Lots of rules :)

Kevin said it was all worth it.  He really enjoyed seeing these pros play, and to see a tournament in person.  Kevin and Gary even ended up on TV for a few seconds.  Don’t worry if you missed it.  I didn’t see it either :)

The course is right along the shores of Lake Michigan.  There was a breeze off the lake, so the heat was bearable.  There are no trees on the course.  It is designed to be like the courses in Scotland with many bunkers, hills, tall grass in the rough, and no trees.  There are 1,200 bunkers (sand traps) on this course.  I could never play there, even if I could afford it. I’m sure I’d be in tears before even finishing the first hole :)

Tiger Woods was gracious enough to hit his ball into the rough right in front of where Kevin was sitting :)    He was only about 10 feet away.  Tiger has an entire entourage of people walking along the course with him.  There were about 50 people with him on the course.  There were his caddy, police officers, media people, and who knows what the others are there for.   Then, you have the 50 million people who follow him along the course outside of the roped off areas.  Kevin said it was just amazing to see this sea of people coming down the course behind Tiger.  He is still very popular.

This Wednesday our son, Korey, and his girlfriend, Cathryn, are coming to stay with us for a few days.  I’m excited to see them!