It has been so wonderful to see my family again.  Korey has been here for almost a week.  He has to leave today, but we’ve so enjoyed spending this time with him.

We attended church in Beaver Dam on Easter morning.  Something the pastor said in his sermon really hit home for me.  He was talking about the rock being rolled away from the tomb, and how God sometimes will roll away the rock of our sorrows or pain.

It made me think of how much Kevin and I had disliked our jobs and wanted desperately to get out and start our new fulltime RVing dream.  It felt at times like it would never happen.  But, now almost a year later, I feel as if God moved that rock for us.  We are so much happier in this simpler life!  We now have the freedom to do what makes us happy. 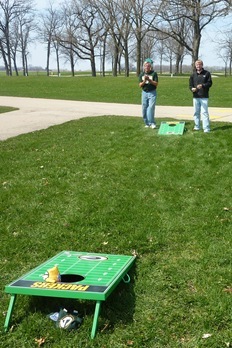 Yesterday the sun finally came out.  It was 64 degrees, and we spent some time outside.  The three of us took a walk and then played some bean bag toss.  Last night the rains came back.  It’s been raining hard all night.  The sun isn’t supposed to return until Friday. Yuck!  All this rain certainly has turned the grass green.

Korey and I sampled the wine I bought in New Mexico.  Good stuff! 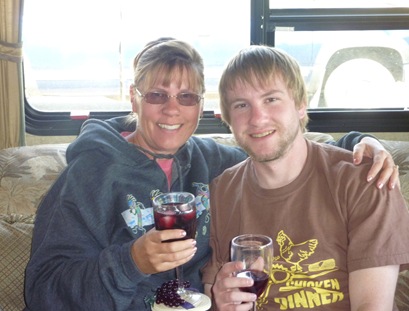 After Korey leaves this morning, it’s time for some errands. We hope to be able to get haircut appointments, go to the bank and get a Mi-Fi air card from Verizon.  Right now, we have a regular air card so only one of us can be online at a time.  We’ve been very dissatisfied with our internet provider, Coast 2 Coast Cellular.  But, that’s a story for another day.

Also, we still do not have  satellite TV.  The local service guy couldn’t figure out what was wrong with it.  He said he thought both of our receivers had gone bad at the same time.  The odds of that are so slim. We don’t think that could be the problem.

But, DirecTV is now sending us two new receivers. They should be here in a few days.  We’ll see if that solves the problem, but we doubt it.  So frustrating!!!!  At least we’re in an area where we can receive local channels through our antenna.  So, we are now having to watch commercials, and Kevin is missing ESPN.  Such a rough life we lead :)

One more event that has happened since we’ve been back in Wisconsin, is that we’ve been hired by Amazon to work at their Coffeyville, Kansas distribution center this fall.  We understand that it will be hard work, but the income we will earn will allow us to take the winter months off and enjoy.  I’ll write more about the hiring process in another post.

Posted by RV Khronicles of Kevelyn at 8:21 AM 2 comments: Links to this post