Just when you think you’ve seen it all, something surprising comes along. Today a converted bus camper pulled into the campground.

We remember this bus being here last year. The dad worked at Amazon. The mom stayed at the bus with the kids. I think they had two or three kids last year and she was pregnant with another. They also had two dogs. They’ve added some extras to the bus this year.

The main thing you notice is the second story they’ve added. It could be a mother-in-law suite, but my guess is maybe a master bedroom or a room for the kids. They now have a trailer for bikes and other things they need. They also have a car this year. Last year whenever they needed to go anywhere, they had to take the bus.

The second story is very interesting and ingenious. I hope they reinforced the roof of the bus. That’s a lot of weight up there. Also, notice the BBQ on the right front. It’s attached to some bars and swings out from the side.

Last year they were parked near us, and the kids were often outside playing. They were the sweetest, most polite kids we’ve encountered. They put up a sign in the laundry room to be dog walkers. There are a lot of people with dogs, so I’m guessing they got some work.  I wonder if their last name is Scholl. Notice the spelling on the bus. 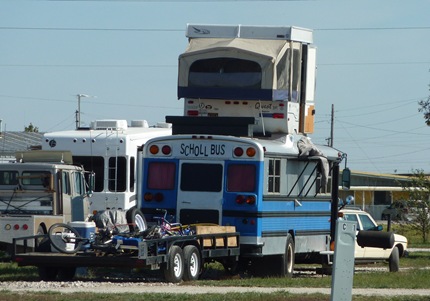 We finished our first two full shifts at Amazon. This week we’re assigned to half of the warehouse. Next week they’ll be assigning us picking areas in the entire facility. Last night I wore my pedometer and clocked just under six miles. My feet are pretty sore by the end of the shift, but its so much better than last year. At least my back and wrists aren’t aching from the standing and packing. The good news is we’ve both lost a few pounds. I have a lofty goal of losing 20 pounds. We’ll see how that goes.

Last night all pickers and packers got sent home an hour early because of lack of work. This happened a few times last year as well. They bring in the work campers in September and October to train and prepare for the big Christmas peak season. So, right now they have more workers than work. At almost every shift, they offer VTO (voluntary time off) to all workers. Many of the regular employees jump at the chance because they know once the rush starts, there is no time off allowed.

Some work campers take VTO, but many say no thanks. We came here to make as much money as possible, so we’re working. They can’t make you go home unless they send everyone home. I was okay with leaving an hour early last night. I was tired and my feet were aching. Today we rest, and tomorrow we’re back for two more full days.

I can’t get my mind around how the computer system works at Amazon. Everything is scanned and placed in the warehouse. The computer knows where every item is located, assigns each picker items to pick based on orders, then tells the packers which orders to pack and in what size box, then prints a shipping label for the box. All of this is done by computer. All the workers do is scan an item, and the computer does the rest. Its amazing how it all works!!

I talked to both boys this week. Eric is doing well and is happy the hot summer days are behind him. Work is now back to a normal pace. Korey just got back from a two week vacation cruise with his friend Jeremy. Jeremy works for Disney World and gets awesome deals on Disney cruises. This year they went to Disneyland and then a 14 day cruise to Hawaii. They had a great time.

Posted by RV Khronicles of Kevelyn at 4:16 PM 5 comments: Links to this post