On Wednesday evening we went to Peoria Park to watch the Brewers beat the Seattle Mariners 5-4.  It was another nice ball park.  Most spring training games are played during the day, however this was a night game.  Since it was also spring break this week, there were tons of kids there.  Right before the game started, we witnessed yet another fantastic sunset. 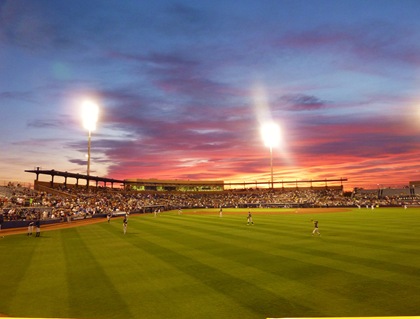 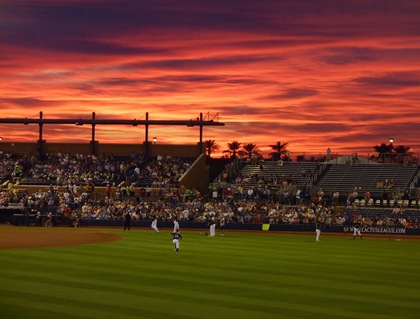 On Thursday we watched the Brewers beat the Chicago White Sox at home by a score of 4-0.  It sure looks like the Brewers will have a great team this year.  Hopefully, their regular season will be as successful as their spring training season.

Thursday was a “Thirsty Thursday” game.  For $20 you get a reserved seat, a beer and a visor.  It also happened to be St. Patrick’s Day.  There was a large crowd at the game.  The Brewers really went all out for the event.

The players wore green caps, and a leprechaun led warm up stretches. 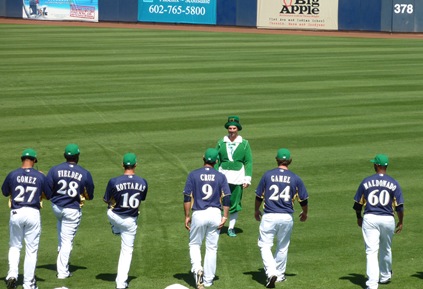 They were serving green beer, and even the logo behind home plate was green.

It was another hot day, and we were glad to be sitting in the shade.  After the game, we went to Fatburger for supper.  I had never heard of the place, but Groupon was offering a special so I purchased it.  Since it was my first purchase on Groupon, I got a $10 credit which made the entire transaction free.

Fatburger is a fast food restaurant made to look like a diner.  They serve hamburgers, a chicken and a turkey sandwich.  We each ordered a sandwich with onion rings, Kevin had a soda and I had a shake.  The total bill was $23, but it only cost us $1.92 because we had the coupon.

The food was decent, but definitely overpriced for a burger joint.  I didn’t really care for the breading on the onion rings, it was a bit too crunchy and dry.  The best part of the meal was the banana shake. 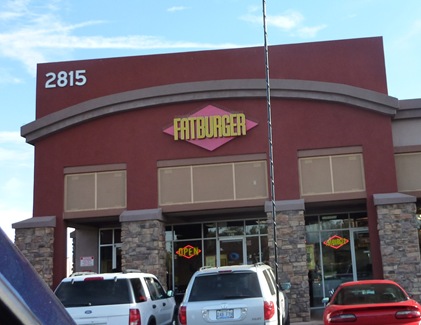 Today Kevin watched NCAA basketball and I did some virtual assistant work.  It was a good day for Wisconsin teams, they both won.

Welcome to new followers John and Sandy and Nantucketbreezes.  We’re happy to have you join in our adventures!