We spent today at Canyonlands.  Another beautiful place with many red rocks.  I’m beginning to think the whole state of Utah is comprised of red rocks and canyons.

After the hiking we’ve done the last few days, my knees were yelling at me to take a rest.  From what I had read online, I thought today would be a day of driving the rim and stopping at overlooks.  That was mostly true :)

We started at the Visitor Center and watched an informative 15 minute video.  Then we headed to the first stop, Shafer Canyon Overlook, with just a small walk down the path to view the canyon. 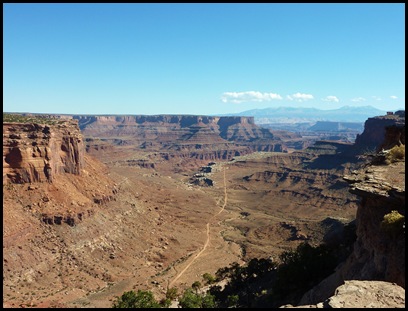 Our next stop was Mesa Arch.  There was a 1/2 mile loop trail with a little bit of climbing up and down rocks.  So far, so good.  The view was wonderful. 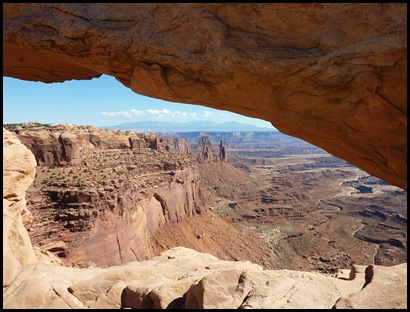 I had to wait about 30 minutes to get the above shot.  Here’s where I rant a little about self-centered people.

Yesterday at Arches there was a sign at the trailhead of Balanced Arch asking people not to be “an arch hog”.  There was a picture of the arch with two people parked under it in lawn chairs.  The sign made me laugh.  I think they need that same sign at this arch.

I love taking pictures and have no problem with people whose hobby is photography.  However, when they “hog” a spot, I find it rather rude.  Today there just happened to be several photography buffs at the arch when we got there.  They had their cameras with the 6 foot lenses, the giant tripods, the light meters, and the 80 pound camera bags.  They were taking pictures from every possible angle.  Then, they stood in front of the arch and looked at the pictures they had taken.  Kevin and I sat on a rock and waited and waited.  I just wanted one picture of the arch without these other people in it.  Finally, after about 20 minutes, I stood in front of the arch with my camera and waited.  Most of those that saw me apologized and moved on.  However, one couple just kept going.  They both had cameras and must have already taken 100 shots.  Lucky for me they got down on the ground with their light meters on the right side and the bush is hiding them :)  As Kevin always says, build a bridge and get over it.  So I’m over it.

Our next stop was Upheaval Dome.  The trailhead said it was a .8 mile hike to the overlook.  So we ended up hiking 1.6 miles on quite a strenuous path.  Up and down lots of rocks and a narrow ledge along a cliff.  So much for resting the knees.  It was worth it, though.  Geologists aren’t sure what formed this area.  There is speculation of volcanic activity, salt domes, and a meteor falling from the sky.  I like the meteor theory.  It just looks so other-worldly!  The picture doesn’t do it justice.  It’s 3 miles across and a mile deep. 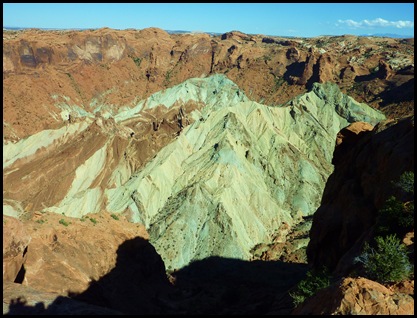 Here’s a view of the Green River from the overlook.  You can barely see the river in the right center.  The Green River and the Colorado River come together in Canyonlands.  The gorges are so deep, it’s hard to see the actual rivers. 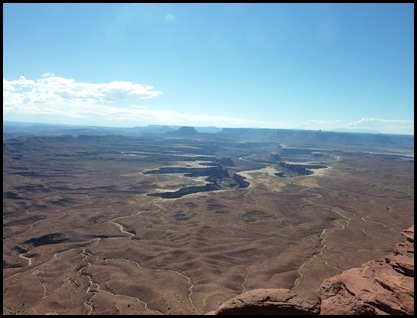 Our final stop was at the Grand View Point Overlook.  Somewhere out there the rivers come together. 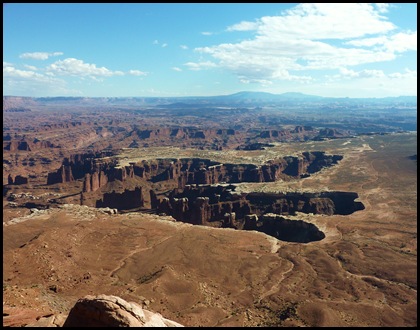 Posted by RV Khronicles of Kevelyn at 9:03 PM 2 comments: Links to this post