We arrived at Lakeside RV Campground in Provo on Friday afternoon. It's an okay place for a few days to explore the area. Our site is a FHU pull-thru, but the neighbors slide is about a foot from ours.

On Saturday we drove about 45 minutes to Salt Lake City. We started our day with a 1.5 hour tour on the Salt Lake Trolley. The conductor and two tour guides were quite entertaining with songs and stories to enhance the experience. I felt it was definitely worth the $29 fare. This was not a hop on, hop off trolley, although that option is also available in the city. Ours did make a few stops where we could get off and take pictures, and we were allowed to go into the state capitol and The Cathedral of the Madeleine to take pictures. The tour offered a very good overview of the city and its history. 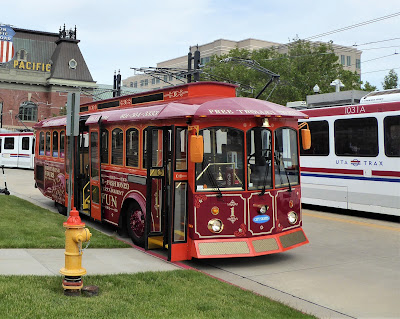 The guide claimed that the Union Pacific Railway station was the inspiration for the station at Disneyland. 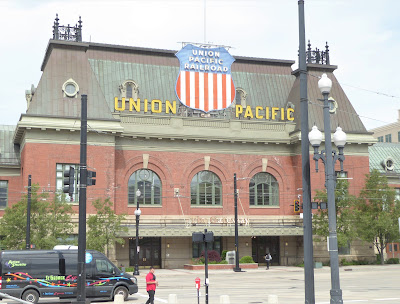 Near the railroad station is the Devereaux House. This was the home of William Jennings, Utah's first millionaire. He was mayor and owned part of the railroad. 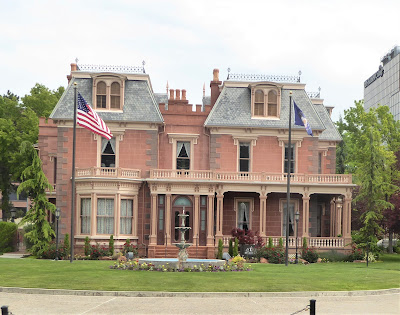 The City Hall was built in 1894. It was designed to rival the Salt Lake Temple as the city's architectural centerpiece. Pride Fest is taking place this weekend, so there were lots of booths for that event set up in front. 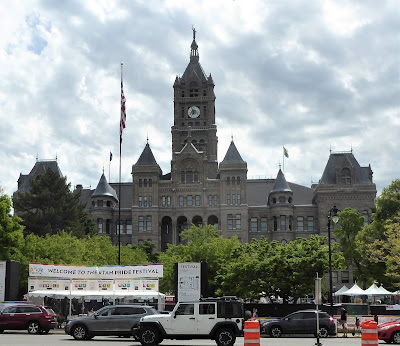 Utah's state bird is the seagull. There are statues of the birds on top of a bus stop. It's not a very good picture, but I had to include it for our son Eric who has to fight off seagulls in Milwaukee, Wisconsin when he is working on rooftops. The seagulls saved the first Mormons who came to Utah. Locusts were eating their crops, but seagulls came from the Great Salt Lake and ate the bugs and saved the crops. 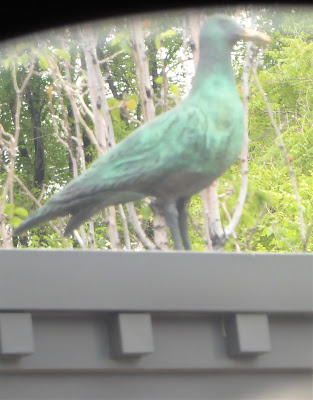 We stopped at the Cathedral of the Madeleine built in 1909. What a beautiful building, inside and out. 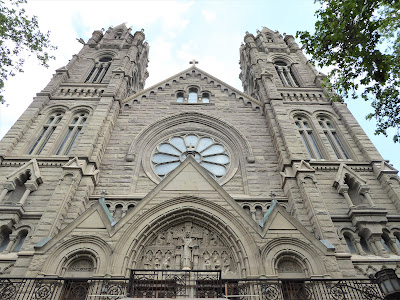 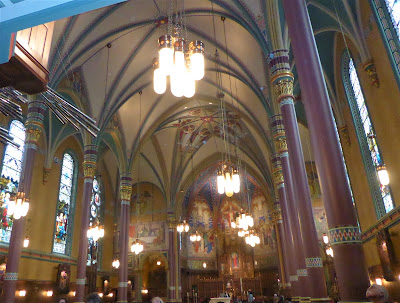 Salt Lake City is Utah's state capitol. The Capitol building, begun in 1912, is beautiful. It looks very much like many other capitol buildings we've seen. 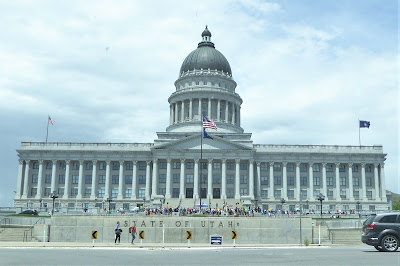 Due to lack of funds, the rotunda wasn't painted for 20 years. The Depression Era Public Works of Arts Project funded the cyclorama depicting scenes from 19th century Utah life. The chandelier dates back to 1915. 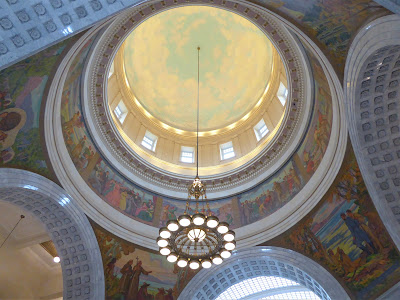 After the trolley tour, we drove downtown to tour Temple Square. The temple was built by the original Mormons who arrived in the valley in 1847, led by Brigham Young. He had a vision to build the temple on this spot, which took 40 years to complete. It is located in the very center of the city.  Most parking lots downtown are underground, which is not good for our truck. We finally managed to find a street parking spot. The good news is there is 2 hours free parking on Saturdays.

We walked to Temple Square and entered the South Visitor Center. There are many displays about the history of the buildings and the Mormons. The Temple is considered sacred, and visitors are not allowed to enter. There were several wedding parties having pictures taken on the grounds, so it was quite crowded. Over three million people visit here each year.

I wanted to hear the Mormon Tabernacle Choir perform. The public is invited to their practices on Thursday evenings, but we weren't here for that. We could have gone to the Tabernacle next to the Temple on Sunday morning, but we would need to be seated by 9 am. I didn't want to fight for a parking spot again and drive the 45 minutes from Provo to get there, so I took it off my list. We could have heard an organ recital on Saturday afternoon, but the grounds were so huge, and it was confusing where to go, so I gave up on that, too. 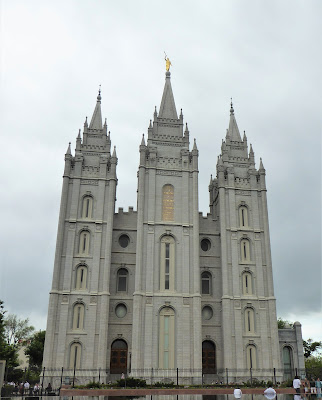 At the entrance to the square, there is a statue honoring Brigham Young and the pioneers who founded the city. He arrived with 147 people. Forty years later over 60,000 Mormons had joined them. It is truly an interesting part of our country's history. 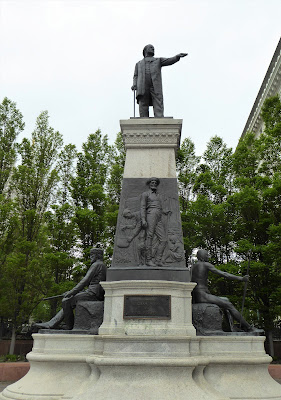 About a block from the Temple is The Beehive House, Brigham Young's home and office. He was the president of the LDS church as well as Utah's territorial governor. We took an interesting free tour of the house. It has been beautifully preserved. 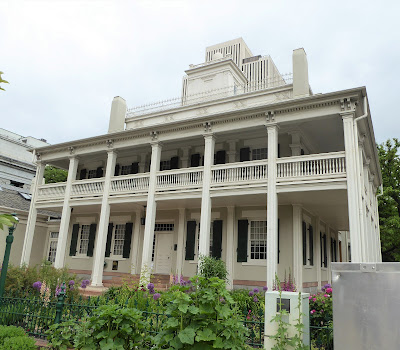 Next door is The Lion House where most of his family lived. He had 56 wives and 57 children, so needed lots of space for them all. The table in the Lion House is said to have seated 70 people. It is now a restaurant. 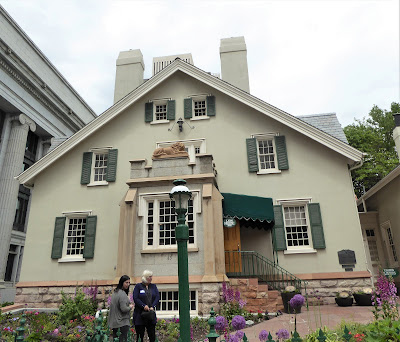 We left downtown and drove to the The Great Salt Lake, the largest salt lake in the Western Hemisphere. It is saltier than the ocean. It has no outlet, so tributary rivers bring in salt which is left behind when the water evaporates. I dipped my fingers into it, and it tasted very salty! 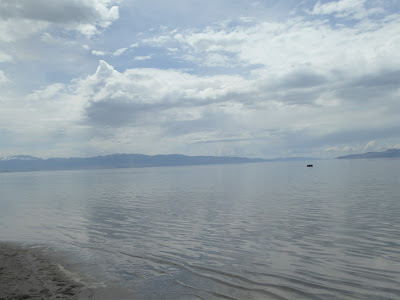 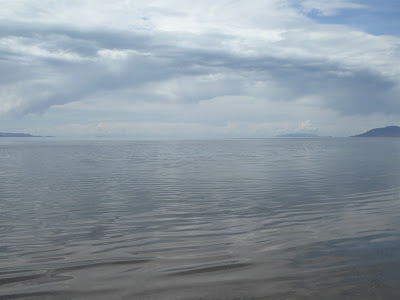 Driving back towards the city, we had a good view of downtown. You can even see the Capitol on the left. 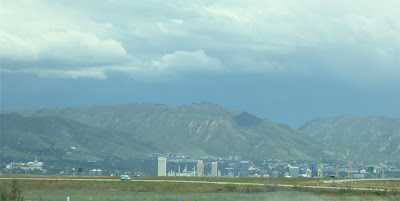 Utah Lake is walking distance from the campground. It is the 3rd largest freshwater lake west of the Mississippi. 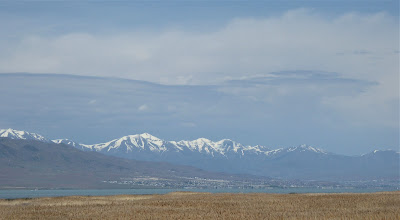 On Sunday we tried to do a scenic drive up to Mt. Nebo. About 8 miles up the Nebo Loop Road, it was closed. There was much evidence of the fire that swept through this area in October of 2018, so we're guessing maybe the road is closed due to fire damage.

Next we drove through Provo to the Alpine Scenic Loop Road to visit Bridal Veil Falls.
The falls are beautiful and the surrounding mountains are also gorgeous. You can't see it in the picture, but people were actually scrambling up those rocks to the falls. It looked extremely dangerous. 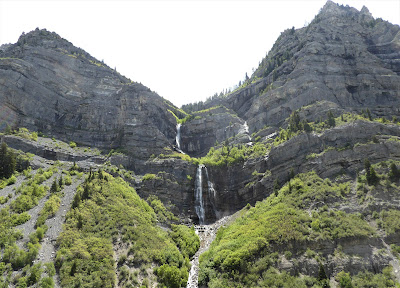 We really enjoyed our first visit to this area. We found both Salt Lake City and Provo to be clean, pretty and interesting cities. The mountains surrounding the area are amazing. 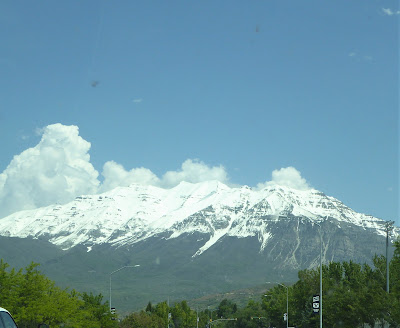 It reminded me a lot of the Denver/Boulder areas, only on the western side of the Rockies. Every afternoon we were here, clouds would build up over the mountains, and we would hear thunder and have some rain showers. I don't know if that is typical.

Don’t wish upon a star – Reach for one!
Posted by RV Khronicles of Kevelyn at 4:45 PM 1 comment: Links to this post