Out of the Ordinary Finds

We spent the day at Joshua Tree National Park.  But, on the way we checked out two unusual tourist attractions.

I have a book called Roadside America which lists hundreds of unusual tourist attractions across the country.  While we were in Utah we stopped at Hole ‘N’ the Rock which I had found in the book.

Yucca Valley, California was our way to Joshua Tree.  The book listed Desert Christ Park as an attraction so we stopped to check it out.

What an amazing out of the way place.  In 1951 at the age of 64 sculptor, Antone Martin, began creating statues depicting Christ’s life.  In 10 years, he finished 50 figures.  They were made out of steel reinforced concrete and coated in white plaster.

He prepared and transported the tons of concrete himself.  After 10 years of working hard, his body gave out and he died.

His entire reason for undertaking this humungous project was his hope that his works may bring mankind together in peace and love for one another and for Christ.

The first statue completed was Christ’s ascension.  It is on the side of a hill, is 10 feet tall and weighs 3 tons. 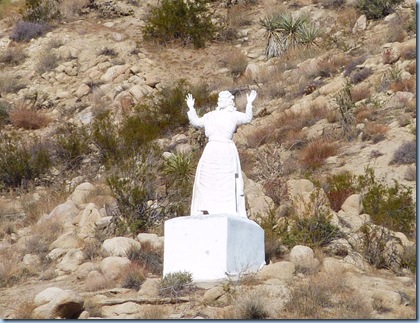 This one is titled “Suffer the Little Children to Come Unto Me”. 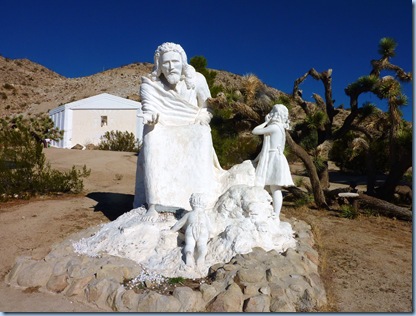 This is a bas-relief of the Lord’s Supper, weighing approximately 125 tons, and measuring 20 feet tall and 30 feet wide. 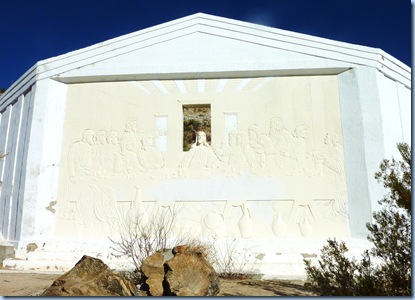 Upon his death in 1961, the park was presented to the Yucca Valley Parks and Recreation Dept.  In 1993 the ACLU sued and the park was taken over by a non-profit organization.  Some of the statues are starting to crumble especially the smaller sections like fingers, hands and arms.  I hope they can keep it going.

Also on the grounds was this cute little chapel made out of rocks. 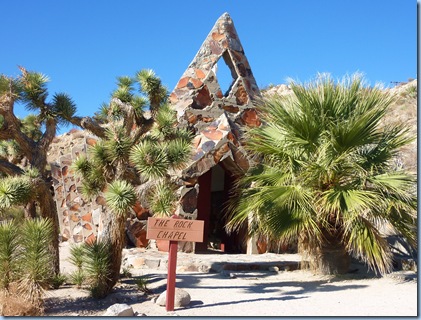 I’m glad we stopped.  It was inspiring to take a little time and admire his work.

A few miles north of Yucca Valley is Pioneertown.  The welcome lady at the resort had told us about this spot.

This town was built in 1946 as a movie set for westerns.  It was also a place for the movie folks to hang out and party.  A number of movies were filmed here in the 1940s and 50s including The Cisco Kid and Annie Oakley with stars including Gene Autry and Roy Rogers. 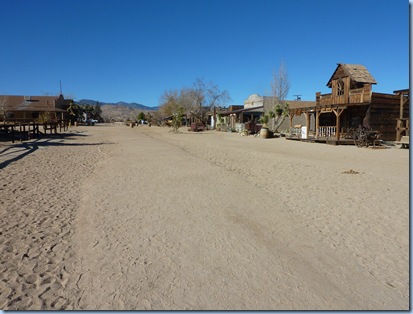 Some of the buildings are actually still occupied.  We saw a number of for sale and for rent signs.  On weekends from April through October they have wild west shows. 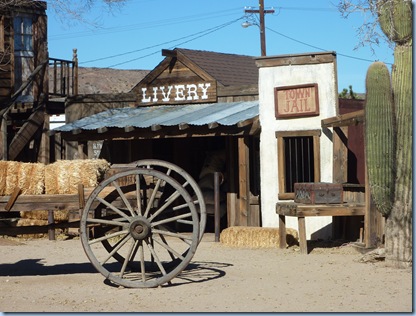 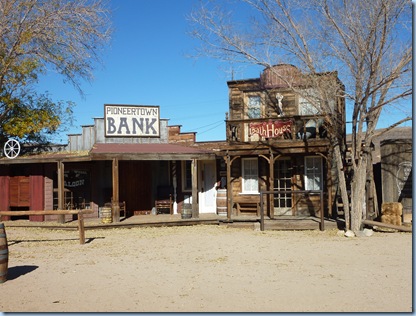 Once again I was amazed today by the perseverance of people from time’s gone by.

Tomorrow I’ll tell you about our visit to Joshua Tree.

Posted by RV Khronicles of Kevelyn at 10:23 PM 2 comments: Links to this post