I saw on the news that the full moon last night was called a Blue Moon.  There seems to be some confusion about what that means. 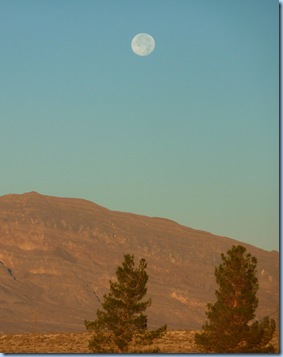 Whatever the explanation is, it sure is beautiful.  I took this picture just after sunrise this morning.

Thank goodness the winds finally died down last night.  We were able to go back to our normal sleeping arrangements, and I got a good night’s sleep :)

The weather across the country sure has been strange the last few days.  The strong winds the west has been experiencing are very unusual.  Utah has blizzard warnings posted for tomorrow.  The weatherman said Utah rarely has blizzards, and they’re freaking out about it.  Wisconsin had two tornadoes today.  That’s almost unheard of for November.

Tomorrow we’re headed for Vegas for a few days.  Five years ago when Kevin turned 50 and our son, Korey, turned 21, we took both boys to Vegas.  In a few weeks Kevin will have his 55th birthday so we thought that warranted another Vegas visit.

We’re meeting blogger friends, Janie and John for lunch tomorrow.  We’ve never met in person, but have found we have much in common through our blogs.  I’m looking forward to getting to know them better.

I leave you with two sunset pictures from a few nights ago.  I love how the colors are so different.  Both pictures were taken at the same time, just a different part of the sky. 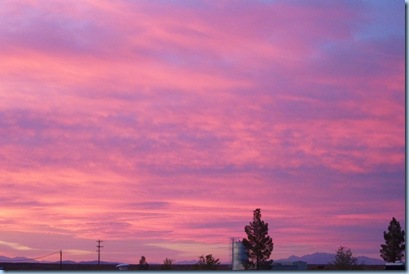 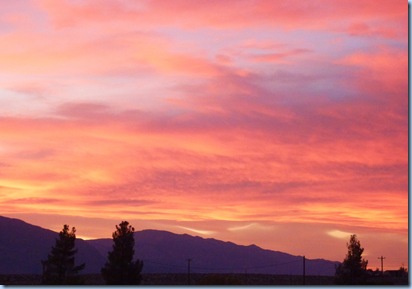 Posted by RV Khronicles of Kevelyn at 9:28 PM 4 comments: Links to this post