Kevin and I want to wish all of our family and friends the merriest of Christmases. Although, we are not joining our family this year in person, you are all in our hearts on this special day. We go back to Wisconsin every other year to spend the holidays with family; this is our year to stay in Arizona. I must say I am missing my kids a bit, but it's wonderful to be able to speak to them on the phone.

The weather up north is the coldest of the season, so I am definitely not missing the cold and snow. We had a bit of a cold spell in Yuma the past few days with highs of only about 60 and lows near 40 with strong winds. However, starting today, we're back in the 70s for highs and about 50 for lows. Can't beat that. 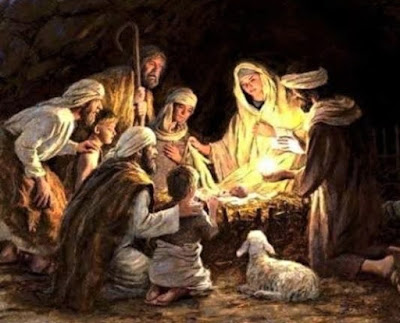 We continue to stay busy here at the resort. While Kevin was back in Wisconsin a few weeks ago, I went hiking with the hiking group. Here's a picture of me hiking in an area called the Painted Desert. It was beautiful. 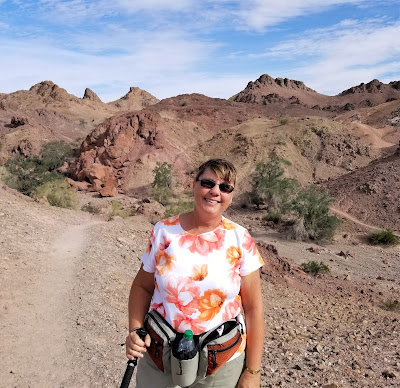 Last Monday Kevin and I both joined the hiking group on an expedition to the Valley of  Names. It was about a thirty minute drive from Yuma to a desert area in California. There are several explanations online of how this area got started. It seems at least sixty years ago people started spelling out their names with rocks. The area has grown to over 10,000 names covering several miles. It's an amazing site to see. Here's part of our group getting started walking around and looking at some of the names. 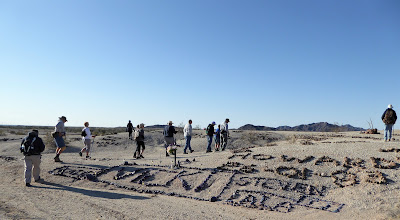 Some people have gone to great lengths to recognize their family. All of these rocks are brought in from the outside. Large plots are outlined with whole families of names. Some have generations of family members recognized. 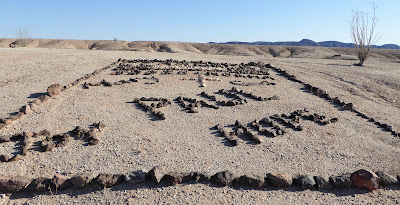 There are names much farther than the eye can see. 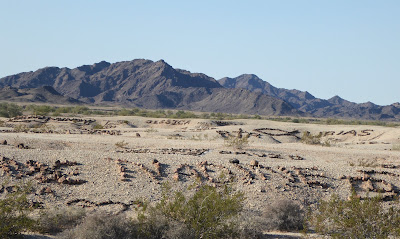 In addition to hiking, we've been golfing a few times a week. We've joined a scramble group on Friday afternoons and a couples group on Wednesday mornings. It's a great way to meet new people.

I join the quilting group once a week to sew together. Starting in January we will be working on a mystery quilt project as a group. That should be fun. They're a nice group. We also play bocce ball on Thursdays when the weather cooperates. The last two Thursdays it was quite cold and windy so we didn't play.

January through March are the busiest times for the snowbird resorts. Lots of people don't arrive until after Christmas. Our resort is supposedly pretty much fully booked, so there should be lots of units rolling in during the next week or two. I have to say that I really enjoy it during this fall season when it's not so busy.

Don’t wish upon a star – Reach for one!
Posted by RV Khronicles of Kevelyn at 2:32 PM 2 comments: Links to this post

We will not be celebrating together this year. Kevin is celebrating in Wisconsin where it is quite cold. The reason for this all started almost a year ago.

During the early months of 2017, Kevin noticed some blood in his urine every few weeks. He thought it would go away; but when it was still happening in spring, he visited our primary care doctor when we arrived back in Wisconsin. He was referred to a urologist who ordered a CT scan. That was the start of a long and stressful summer.

He was diagnosed with a bladder tumor which was most likely cancerous. He had a surgery in August to have it scraped out. After the surgery, they put chemo drugs in the bladder to kill any cancer cells that may be floating around. He was passing a great deal of blood through the catheter, which required a second surgery on the same day to cauterize the bleeders. That meant two surgeries with full anesthesia in one day. Needless to say, after the second surgery he wasn't in the best of shape. He had lost a lot of blood, his blood pressure was doing crazy stuff, so they kept him over night.

At the office appointment a week later to get the pathology results, he found out the type of cancer cells he had were the worst of two types. The doctor recommended another surgery to scrape even further down to make sure all cancer was removed. In September, Kevin had that second surgery with the chemo drugs in the bladder again. This time things went much better, and he was able to come home the same day.

The follow up of that surgery was excellent. He has been declared cancer free!!! However, he must go in for a scope test every three to four months to make sure it doesn't come back. There is a chance it will return within three to five years.

Because of the lousy insurance choices in this country, it was cheaper for him to fly back to Wisconsin to see his doctor in the HMO we are in for that test, than to go to a doctor in Yuma. Once he is old enough for Medicare, he will be able to see a doctor anywhere in the country.

I did not post about Kevin's health scare before now because I wanted to see how it all played out, and I just wasn't ready to do so. One thing I really would like everyone to take away from this experience is that over 90% of bladder cancer occurs in smokers or former smokers. Please let this be a wake up call to anyone who still smokes.

He is staying with our son Eric while he is there. They have plans every day until he returns on Wednesday. I think it will be a great guys visit. Today they are going to a friend's house to watch the Packer Game and play cards with a group of guys they have been playing cards with for years.

Since Thanksgiving we have been enjoying ourselves in Yuma. We continue to golf, play bocce ball and lots of other activities. One day we went to Mexico with friends Brad and Martha. I bought a nice small leather back pack and a new ankle bracelet. We also stocked up on some booze, and enjoyed a delicious lunch with tasty margaritas. My shrimp tacos were very good.

On December 3rd there was a full moon. The night before it rose while still light outside. Here are a few pictures of it coming over the foothills. 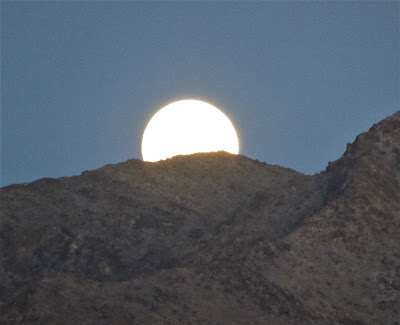 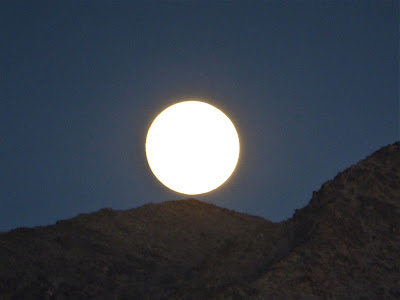 On Sunday, the actual full moon night, the resort hosted a "Howl at the Moon" party. There was a bonfire and a band playing. Lots of people attended, and it looked like everyone had a great time. 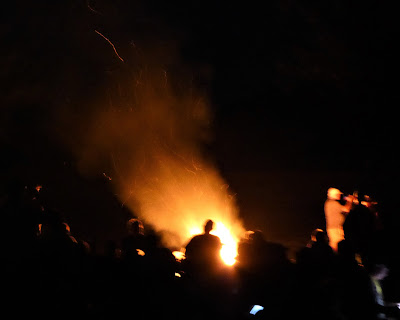 Unfortunately, right before the moon rose over the foothills, a large cloud moved in. There was still plenty of howling going on. The moon rose between two palm trees. The picture isn't the best, but it was still an amazing site. The event was such a success, the resort is already planning for the next full moon party. 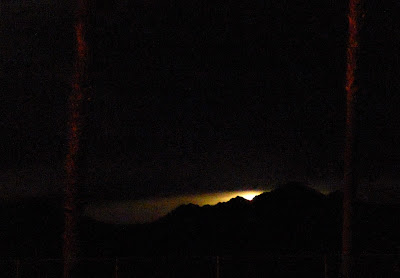 Several times since we've been here three or four ultralights have flown over the resort. They are sure interesting to see. I don't think I'd have the guts to do that! 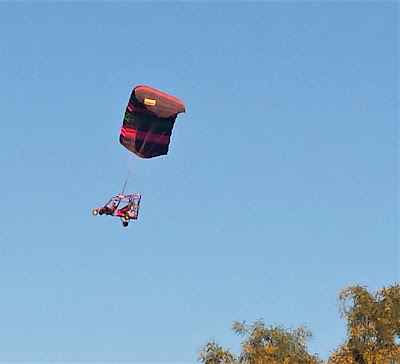 Yesterday the Yuma Orchestra String Ambassadors put on a Christmas concert at the resort. They are a group of young people who enjoy sharing their musical talents with others. I went by myself, and really enjoyed the show. 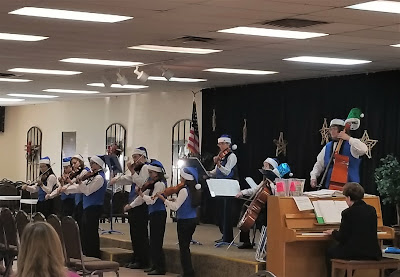 Tomorrow I'm going hiking with the hiking group. The rest of the time Kevin is gone, I plan to do lots of sewing. We've been so busy, I haven't had much time for that. There is a quilting group in the park, and I have been trying to get down there once a week and sew with the group. They are a fun group of people, and I enjoy sewing with them and sharing ideas.

Don’t wish upon a star – Reach for one!
Posted by RV Khronicles of Kevelyn at 9:51 AM 3 comments: Links to this post