Last Friday we went to the All Valley RV Show in Mercedes, Texas. This show was billed as the largest RV show in South Texas and one of the largest shows anywhere, so we were expecting quite the show.

We looked all over for our friends Dave and Judy. Kevin was sure we’d see them there as they go to lots of RV shows in Wisconsin. Ha, Ha!

There were quite a few travel trailers and fifth wheels. We were pleased to see there were several of the higher end fifth wheels we would be interested in for fulltime RV living. Kevin was happy that I didn’t see anything I just had to have.

This Winslow by Excel had five slides with the living area up top. 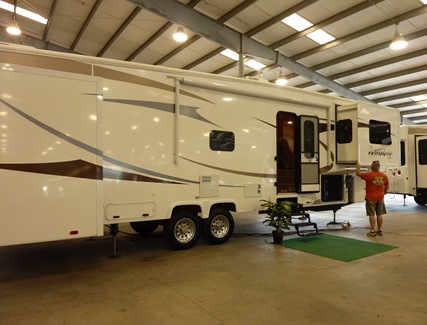 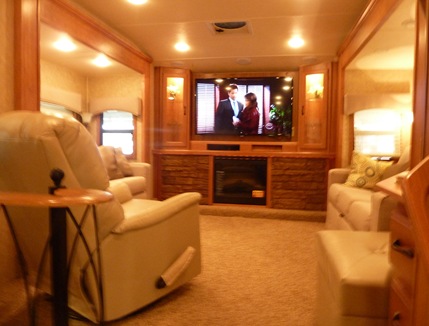 The upper living room looks like a good idea, but there didn’t seem to be enough storage space in the kitchen area.

There were quite a few park models and mobile homes on display. Some of them were very nice. Someday we may be in the market for one of those, but hopefully not for a long time.

Kevin was disappointed that there weren’t very many vendors with RV products. He was looking for a water filter, but there wasn’t anyone there with those kind of supplies. I did manage to get a coupon for two free nights camping at a Thousand Trails park in eastern Texas. We won’t be able to use it this year, but may be using it next winter on our way to New Orleans.

There was one Jayco Pinnacle fifth wheel on display. That’s the equivalent model to our Designer. It was nice, but I didn’t like the floor plan they had on display. I’m also not that thrilled with the paint scheme. 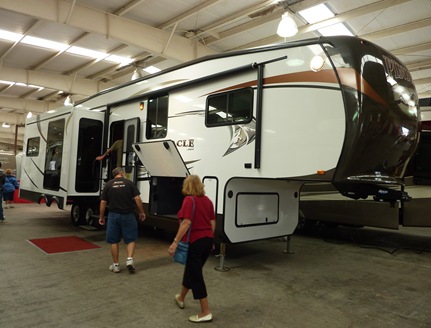 There weren’t any Class A motorhomes and only one or two Class Cs. We definitely wouldn’t describe the show as one of the largest.

On Saturday temps were in the 80s and it was rather humid. We spent a few hours washing the RV and truck. This campground allows you to do that. Everything is spic and span again. After all that hard work, we spent some time in the pool and hot tub. Ahhh!!

Sunday was back to cold weather. We literally went from needing the air on Saturday to having the heater back on Sunday. Since the beginning of the year, we’ve had about 5 nice days in Texas. The rest of the time has been cool, cloudy and damp with north winds. We’re really not liking Texas all that much. I doubt we’ll come back.

One of my blog followers sent me a message that they were just down the road from us. So, yesterday they came over for margaritas. They are John and Sharon and their blog is On the Road of Retirement. They’ve been on the road for about a year and are around the same age as we are. We spent a few hours getting to know each other and having a very nice visit. Unfortunately, I forgot to take a picture.

We’ll be meeting up with a few more friends in the next two weeks. If the weather ever gets nice, we hope to check out South San Padre Island and maybe Mexico. Its just not any fun doing outside stuff when its cold and cloudy.

Posted by RV Khronicles of Kevelyn at 6:03 PM 3 comments: Links to this post