On Monday we traveled to Longstreet Casino and RV Resort in Amargosa Valley, Nevada.  I think it’s a stretch calling it an RV resort, but it’s fine for our purposes.  We needed someplace to hang out until December when we head to San Diego and this place was a good bet since it’s not far from Death Valley.

The monthly rate is $10.14 a night which includes a FHU site with 50 amp electric and free wi-fi and cable.  The cable picture is pretty lousy, but all we use it for is local news.  Our local channels from Utah are still working on the DirecTV satellite.

When we had to change our local channels from Colorado to Utah with DirecTV, we had another customer service fiasco.  It took four people and two days until they got it right.  So, we decided not to call to change the local channels until we have to.  It’s kind of nice because the Utah channels are on mountain time and we’re now on pacific time so everything starts an hour earlier.

The casino is also a hotel and seems pretty nice.  The casino only has slot machines, no table games.  It is rather smoky, so I don’t plan on spending any time in there.  Behind the building is a pond with a waterfall, gazebo and lots of ducks.  At night there are lights in the trees and the gazebo and it looks so pretty.  The night sky is amazing with tons of stars. 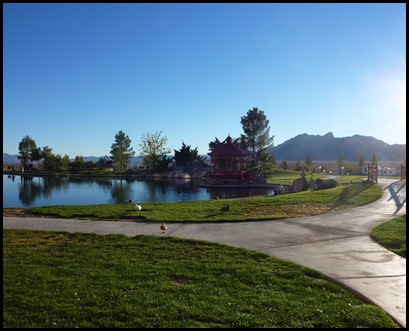 The campground is behind the pond.  It’s a large gravel lot with hook-ups and a few small trees.  We’ve found that to be pretty standard for most campgrounds in the desert. 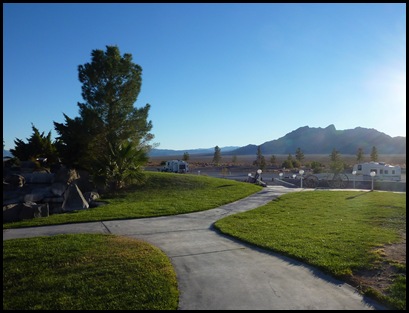 That’s us on the left.  There are several campers that belong to employees.  There have been about two or three other RVs here each night.  The lady in the office told me that they get busier when the snowbirds arrive.  There is also a pool and a hot tub that look very nice.  Unfortunately, they’re not open.  At check-in, we were told they are understaffed and don’t have anyone to take care of the pool.  That’s a shame, but at $10 a day, I’m not complaining.

The weather has been fantastic.  Highs have been about ten degrees above average.  Today it was 84 degrees.  Next week is supposed to get back to normal with highs in the 70s and lows in the 50s.

We walked for about an hour yesterday and walked to California.  It’s only a 1/2 mile from here.  Next week when it’s a little cooler we’ll check out Death Valley National Park which is about 8 miles away.

Today we road our bikes for an hour.  We’re finally someplace that isn’t all hills.  I haven’t ridden a bike (other than a stationary bike while rehabbing) since I tore my ACL from falling off my bike about a year ago.  I have to admit I was a bit nervous and tentative especially on gravel, but I did fine and enjoyed it.

Here’s a view of the mountains behind us at sunrise.  Sunset is quite early at about 5:30 p.m. and I keep forgetting to watch for it.  Tonight I’m going to make sure to watch the sun setting over the mountains. 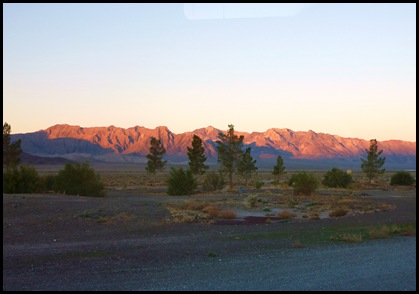 So, we’re taking it easy doing some little chores and relaxing and enjoying this great weather; back to wearing shorts :)