As I mentioned in a previous post, we had some severe storms come through Wisconsin in the early morning hours of July 13th. I was awake from 2:30 am on because our weather radio kept going off. The worst of it went south of us, and we only had some small branches and leaves down here. One of the campers lost a canopy, but we were lucky that the worst of it passed us by.

Another Dodge County Park was not so lucky. Astico Park is about 20 miles south of us. We were camp hosts there our first full time summer in 2010. The park has been closed since the storm, and will most likely remain closed until at least the middle of August.

Last Monday we drove over to take a look at the damage. The public is not allowed in, but we got permission since we are park employees. The damage was unbelievable. There are over 300 trees down. They were either snapped off or pulled right out of the ground. These are huge oak and other hard wood trees. It was not a tornado, but rather 100 mph straight line winds. The entire community of Columbus had major damage and was declared a state of emergency the day after the storm.

The following are just a few pictures of what we saw. This was a full week after the storm hit. Pictures do not do justice to the devastation we witnessed. This is the road that goes up to the campsites on top of the hill. Both sides of this road were completely wooded before the storm. The morning after the storm the road was completely impassable. All of the debris has been pushed into the ditches along the side. 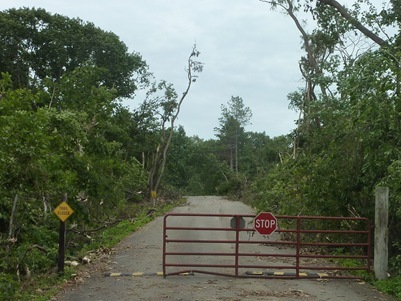 Campsites 1 through 4 were heavily wooded. Luckily, the storm hit early on Monday morning, so there were only five campers in the park. If anyone had been on these sites, they would most likely have died or been severely injured. Below is site 3. Hard to believe there was even a site there. 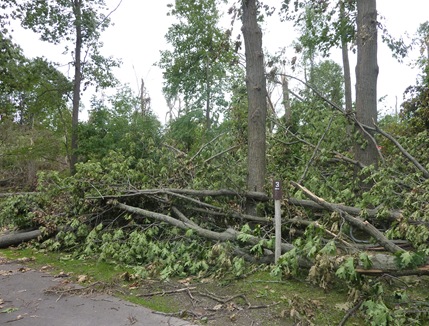 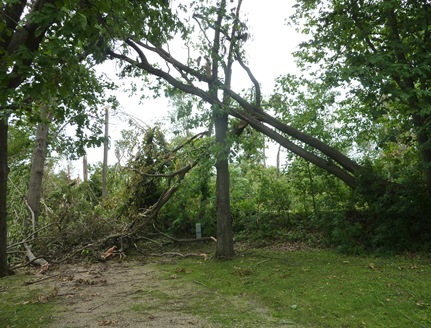 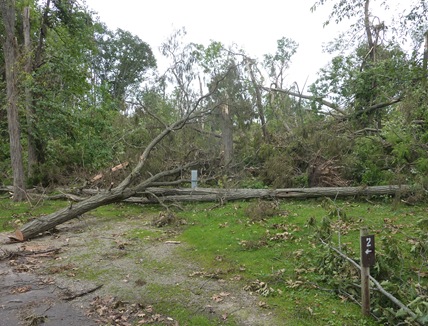 Here’s an example of one of the many, many trees that were snapped off. There are lots of these huge snapped off sections dangling in the branches of surrounding trees. If another strong wind comes, these could be deadly to someone below. 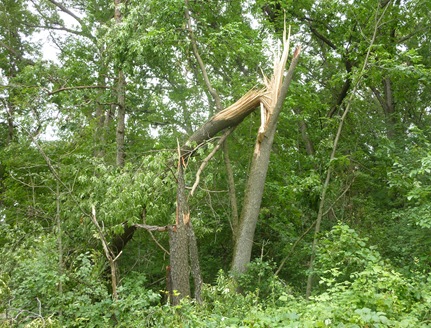 Here’s the vault toilet in the tent area. 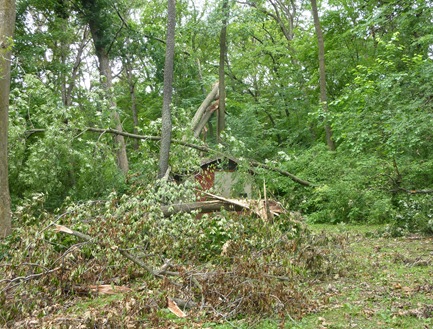 This is one of the main roads going to another camping section called the Danville area. They haven’t even gotten to this area yet. They’re still trying to get the main area open. 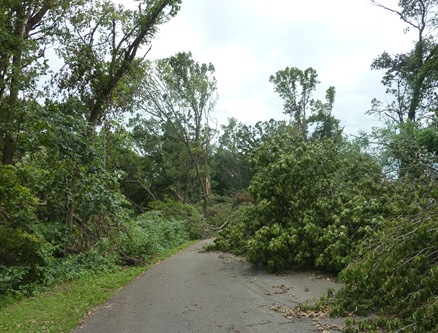 Because that park is closed, we’ve been busier than ever. Normally, we have just a handful of campers here during the week. This week we had quite a few. Our weekends have been completely booked even before the storm, and the trend continues.

In my spare time, I continue to work on quilting projects. I made two of these placemats for our table recently. I like decorating with a north woods bear and moose theme. I have two other bear placemats I made earlier. 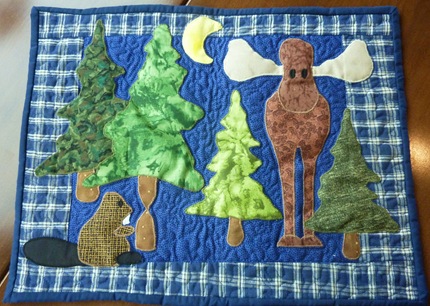 Last Monday morning, a thunderstorm came through right at sunrise. Here’s a beautiful picture of the sun peaking out through the storm clouds. That was the actual color of the sky. 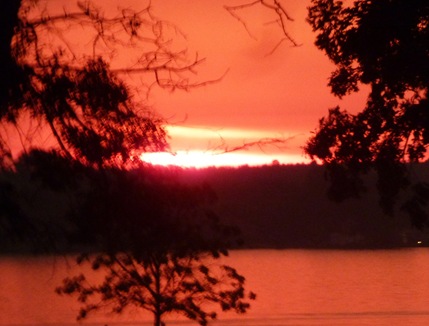 I planted sunflower seeds at the back of our RV this year. They have grown very well, and I have some gorgeous sunflowers. 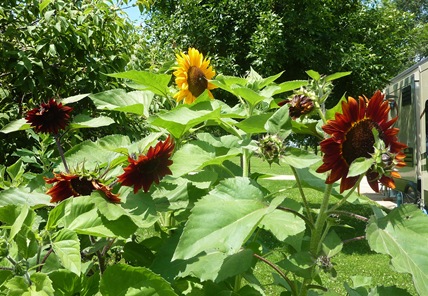 One of them has petals growing on the front and back. I’ve never seen a flower like that before. 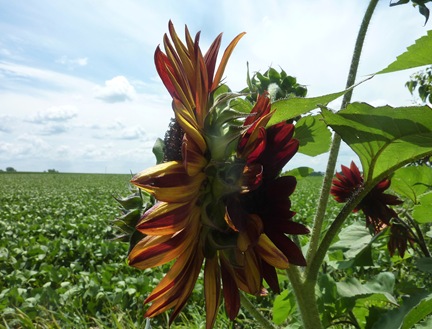 Three couples that are friends of ours are coming to camp at our park this weekend. This is a group of friends where the guys play cards once a month. Our son Eric is part of the card playing group, so he’s coming tomorrow and staying until Sunday. I’m looking forward to some fun times. It’s pretty hot out, so try to stay cool everyone.