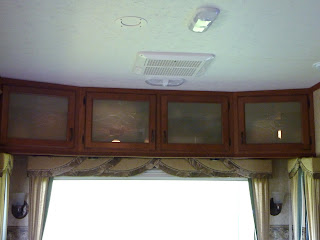 First of all, I wanted to show you a picture of our upper cabinets. I previously posted a picture showing how see-through the frosted glass doors were. We didn't like that we could see the stuff behind the doors. We bought some frosted window lining and placed it on the back of the glass doors. It took two layers, but I think it looks much better. You can still see a shadow, but it's not nearly as unsightly as it was. Hint to the RV designers. The glass doors may look nice in theory, but they are not very practical. Here's a picture of one of the park visitors. He's been coming up from the banks of the river. I've seen him almost every day. He is usually a few sites over from us and seems to be feeding on the dandelion seeds. After doing some research online, I believe he is a muskrat. So far, he has been less trouble than some of our human visitors. :)

We've been camphosts for about 3 weeks, and it has been very quiet so far. That changed this weekend. We are co-hosts at Astico County Park near Columbus, WI. Our co-host is on vacation until next week. She went to Italy! There is also a full-time park attendant who lives in a house on the property with her husband. All of us are located near the entrance of the park. That's also where the wood sales shed and the bathhouse are located.

It's a very nice park with a river flowing all along the park borders. The river has a few bends in it so there are a few different camp areas in the park located along the different bends in the river. There are about 70 total sites with 40 of them having electric hook-up. The rest are tent sites. These tent sites are located on the point where the river makes a sharp turn. This area seems to attract a younger crowd who enjoy playing their music loud, staying up late and consuming large quantities of certain beverages. We had a few groups of these younger people camped at the point this weekend.

The county has a ban on bringing in any firewood due to the Emerald Ash Borer problem in neighboring counties. Therefore, we sell a lot of wood. I was the only one here for much of the day yesterday and I sold a LOT of wood. There is a large sign stating wood sales are between 8am and 8pm. Some of these young groups bought $20 worth of wood which is 44 pieces. You would think that would be enough for one night. :)

Around 12:30 pm last night, there was a knock on our door. It was the camp attendant's husband. He had caught some young men who had climbed the fence of the wood shed and were trying to help themselves to some more wood. They claimed they had knocked on our door, and we had not answered. He was just checking out their story. Of course, they were lying. The sheriff was called. I'm not sure what happened to them as I went back to bed. Hopefully, this is not a sign of things to come. We have been assured that this is a quiet park, and there are usually not many problems. I understand things like this will happen; I just hope it's not very often. Here's a picture of the fence these guys climbed. Maybe barbed wire will need to be added at the top! :) 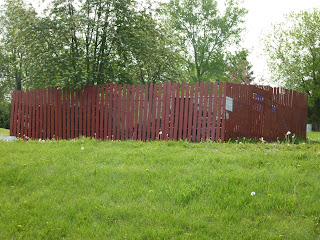 It's a beautiful day today. The sun is shining and temperatures are expected to be near 70 degrees. It's 10:30 in the morning and the mass exodus of campers has begun. When Kevin and I used to do weekend camping, we always tried to stay as long as possible on Sundays. For some reason, Sundays were often the nicest day of the weekend! :) We never could understand why so many people leave so early on Sundays. We're not going anywhere today. Just going to enjoy this beautiful day in our new life!!

Posted by RV Khronicles of Kevelyn at 9:29 AM 2 comments: Links to this post