We’ve been back in Wisconsin just shy of three months.  What a difference a few months make.  Spring and early summer were cold and rainy.  When the weather finally warmed up, it did so with a vengeance.  We’ve had quite a few hot and muggy days.  Our air conditioning is sure getting a workout!  I’m not complaining, I’ll take warm over cold anytime.

Here are a few before and after pictures.  When we arrived at our campsite on April 20th, there was snow on the field behind our site.  Now, less than three months later, the wheat is turning a beautiful golden brown.

In early May we planted a garden.  It’s doing pretty well.  We’ve been enjoying the lettuce for weeks. I’m hoping to have beans soon. 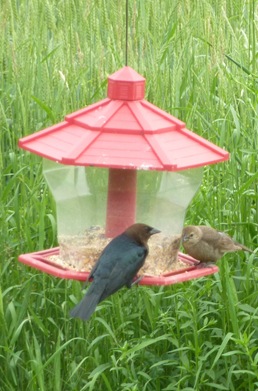 We’ve had another new visitor at our birdfeeder.  I believe it is a brown headed cowbird.  I’ve never seen one before. I’m not sure what the little light brown bird is next to the cowbird.  There are lots of these little guys around all the time.

Last Tuesday, July 5th, we visited some friends in Waupaca, Wisconsin. It’s about an 1-1/2 hour drive from here.  The last several years, we’ve been part of a group of 5 couples that have camped together over the 4th of July weekend.  This year we weren’t able to join them for the weekend due to our camphost duties.  However, they were all staying until July 6th, so at least we were able to join them for a day.  We had a great day visiting with everyone!

It’s been pretty quiet for us.  About half of our campsites were occupied this weekend.  Overall, a well-behaved and quiet group.  We really like this park.

This weekend is Beaver Dam Lake Days. There were a number of activities scheduled in town all weekend.  Today we were going to go to a waterski show and a craft fair in the park.  A line of thunderstorms rolled through around noon.  Now it’s hot and really humid again and the ground is all wet.  So, we decided to skip it; maybe next year.

Instead we’re watching Steve Stricker of Wisconsin as he leads the field on the final day of the PGA golf tournament. Another relaxing day!

Posted by RV Khronicles of Kevelyn at 3:03 PM 2 comments: Links to this post