Well, my first week of retirement is almost over. I'm still loving it! :)

It's been a busy week. I was able to organize the closet, the bathroom cabinets and the cabinets in the entertainment center. I still have some upper cabinets to organize. I have also found that the storage areas can get messy very quickly. It's important to put everything back the way it was right away.

The cabinets above our couch and recliners have frosted glass in the doors. You can see the stuff behind them and it doesn't look very nice. We're going to see if we can buy some type of film to put on the back of the glass to make it less see-through. Kind of like the stuff they put on bathroom windows so you can't see through them. We'll see how that works. Here's what they look like now. 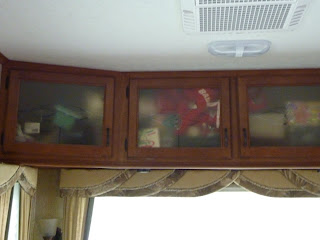 We're still trying to figure out the best way to get satellite TV. Everyone we talk to has a different answer. I think we're just going to have to pick something and see how it works.

We had some beautiful weather this week. Both of us have gotten a start on a tan. Hopefully, my legs will never be this white again! :) Today it is raining and the high is predicted to be only 50 degrees. There is a frost warning for tomorrow night. We have a small electric heater and our fireplace running. It is nice and cozy in here.

Yesterday I spent the entire day running some errands and finishing up at the house. The estate sale people were there preparing for the sale on Sunday. I hope that all works out. I was surprised to see some of the things they threw away. It seemed random and some of the things were still in very good condition. For example, they had some Tupperware containers and some perfectly good blankets in the trash.

Speaking of trash, I have some venting to do. I contacted Waste Management to let them know we would have extra trash today. When we contracted with them many years ago, I was told we could have extra trash once in a while, but we had to let them know so they could make sure the truck had enough room. I seem to remember being told there would not be an extra charge unless it was something really big like furniture or appliances. I have 15 extra bags this week. That's it. Nothing big. When I called, I was told it would be $7 per bag for the extra bags. After complaining, they lowered it to $4 per bag. When I explained that this was the only time in all the years we have contracted with them that we have had anything extra, they didn't care. When I pointed out that there are many weeks when our bin is half empty, they didn't care. When I pointed out that we have had a number of weeks when we were on vacation and we didn't put out any garbage, they didn't care. Not once have we ever received a credit for not having garbage, but the one time we have extra, they are going to charge us. That just stinks! I told them I would not be contracting with them at my new home. They don't have to know I won't have a new home and will not have to pay for garbage anymore. :)