Moving On To Buckeye

We finished our time in Yuma with very warm weather and some of the same activities we enjoyed all winter. The resort sponsored a resort-wide golf scramble tournament on our last Sunday. We both participated and had a great time. The quilting group also had a season ending event, which was a potluck supper on Monday, February 29th. Husbands were invited, and we got to know some of the people a little better.

During the last week, we got together with Dick and Wanda a few times for some cards and visiting. It was fun having them at the resort this winter. We certainly enjoyed our four months at Fortuna de Oro in Yuma, and we definitely plan on returning some time in the future.

On Tuesday, March 1st we had an uneventful drive to Buckeye, Arizona; about 2.5 hours from Yuma on the western side of Phoenix. We are at Leaf Verde RV Resort again this spring. We really like it here; the location, the pool, the sites and the price. The tire monitoring system we purchased at the Quartzsite RV Show seemed to work well.

On Friday we attended our first spring training game of this season. The Milwaukee Brewers have five games this season where they are giving away bobbleheads, so those are the games we plan to attend. On Friday we got a Jonathan Lucroy bobblehead. I sell them on eBay which helps cover the cost of our game tickets.

The Brewers did some major house cleaning during the off season. I only recognized two of the players when they announced the starting lineup. The team looked good, so we have high hopes for these new players. It was nice to see a win; we saw very few last spring. 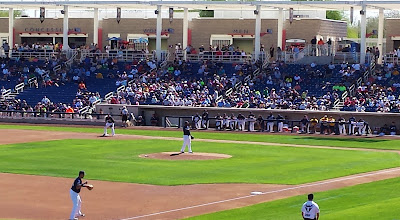 Yesterday we attended the Tres Rios Nature Festival in Avondale, a neighboring suburb. Tres Rios Wetland Area is a natural area run by the City of Phoenix. It is right next to the Phoenix International Raceway where we attended a Nascar Race last year. We had no idea this nature area was there. The Tres Rios area encompasses the area where the Agua Fria, Gila and Salt rivers collide and head toward the Colorado River.

There were quite a few vendors and lots of activities for kids including fishing, archery, a rock climbing wall, and canoeing; all for free. We went on a bird watching walk. We were given a pair of binoculars to use on the walk. We saw some birds, but none that were new for us. I forgot my camera, so only had my cell phone for pictures. These cliff swallows were fun to watch. They had built many nests under the bridge supports. 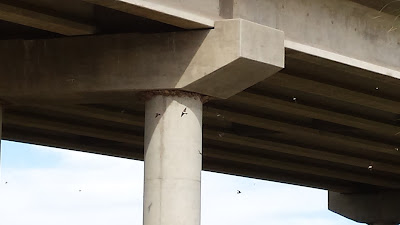 One of the most beautiful trees we saw was this salt cedar. It turns out these trees are non-native and very invasive to the area because they are big water hogs. Several years ago this area was overrun with these trees. A major project was undertaken to get rid of them and replant with native species. This one tree somehow survived. 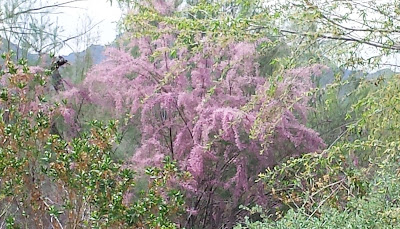 This Carpenter Bee was interesting to see. I've never seen a black bee before. Our guide told us they live in holes in trees. Very pretty, but it will still sting you. 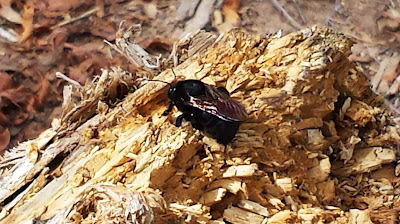 After the walk, we headed to the food area. I've seen Indian Flat Bread advertised at several places we've been to over the last few years and have always wanted to try it. I ordered it with powdered sugar. It was huge, the size of a very large dinner plate. Kevin didn't want any, so it was ALL for me. I forgot to take a picture when I got it, so here's whats left after I ate half of it. The rest will be for breakfast today before we go to another ball game. It was very good, but reminded me very much of a funnel cake you would get at the fair in Wisconsin. 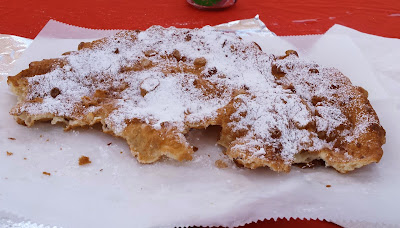 Every day since we arrived here on March 1st has either broken or tied a record for high temperatures. Tomorrow we will finally have some relief with a high of only 70 degrees. They were originally forecasting rain, which they really need; but now it seems we won't get any rain or very little. I'm looking forward to a some cooler temps, much closer to average for March. There are two pickle ball courts here, so with the cooler temps, we will play some games this week.

Don’t wish upon a star – Reach for one!
Posted by RV Khronicles of Kevelyn at 8:35 AM 1 comment: