We spent a week at the Spokane KOA. It was conveniently located between Spokane and Coeur D'Alene. It was an okay campground. My biggest issue was the nearby train that came through a few times each night with a very loud horn that it blew four times each trip.

We explored Riverfront Park in downtown Spokane. The park has this really awesome looking slide, a giant Radio Flyer Wagon. There are stairs on one side and a slide on the other. Kids were having a great time! 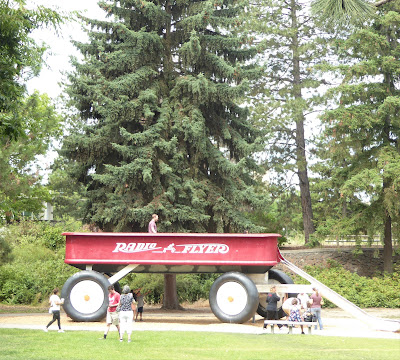 The Spokane River runs through downtown with several waterfalls. They're pretty small as far as waterfalls go, but several power plants along the river provide power for the area. In the background you can see the clock tower which was built for the 1974 World's Fair and a new amphitheater that is still under construction. 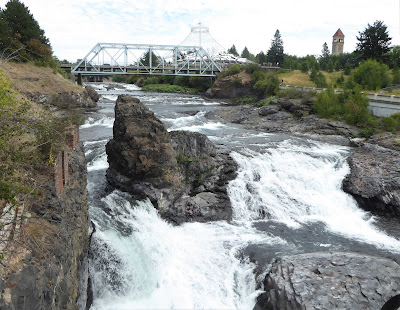 Downtown Spokane was very clean and the buildings were well maintained. We walked to the Black Label Brewing Co. Kevin ordered a flight and said the beers were really good! 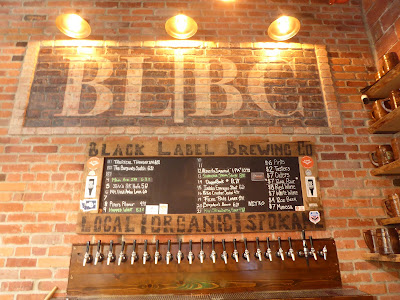 The forecast for the rest of the days we were there was about the same, cloudy with no rain. On Monday we drove to Lake Coeur D'Alene in Idaho. I had always heard this was such a beautiful area and a must see place. We bought tickets for a 90 minute boat tour. 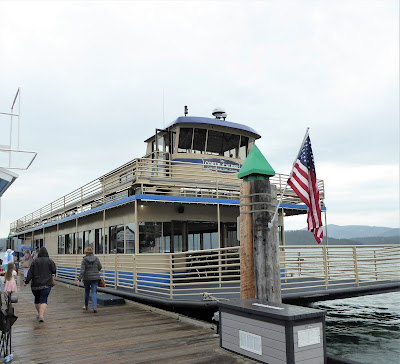 Unfortunately, the weather guessers were wrong. We had rain/drizzle almost the entire tour. Luckily, the boat wasn't full and we were able to hang out on the enclosed lower level next to windows, so we still got a good view. It is a beautiful area, but not as great as what I was expecting. 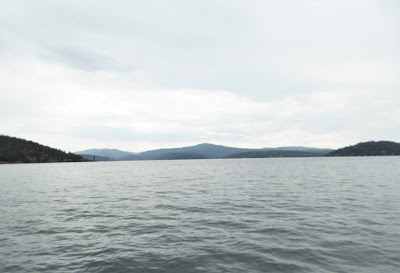 The tour was narrated. We learned the lake is 25 miles long with 135 miles of shoreline. We felt the narration could have been better. We saw many places that we wish would have had an explanation.

The Coeur D'Alene Golf Resort has won many awards. Their signature hole floats in the lake (on the left side of the picture with the red flowers). A little boat takes you out to the hole to finish playing. A lady on our tour said they had watched play on the windy day before. She said only about 1 in 20 people actually landed their tee shot on the green. It's a pricey place to play, not in our budget! 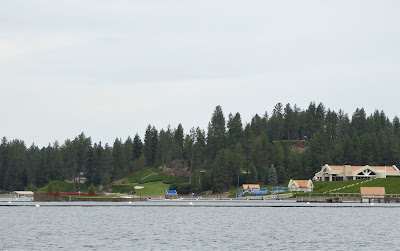 This single family home is one of the most expensive places on the lake. We saw many large, beautiful homes. 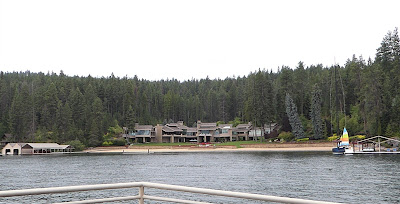 This house is literally the house on the rock. 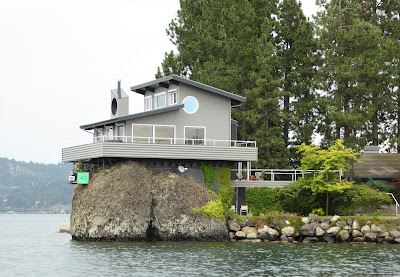 The next day we drove to Post Falls, Idaho to tour the Buck Knife Factory. Someone Kevin had talked to had said this was a great tour. They were correct. As we don't hunt or fish, we weren't too familiar with these knives. The entry fountain was beautiful. We saw several of these large rock fountains in the area. 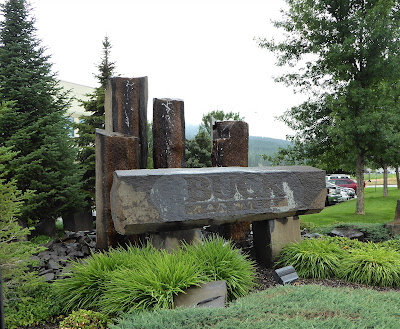 In 1902 at the age of 13, Hoyt Buck made the first Buck Knife while working as a blacksmith apprentice. He went on to start the company in a shack in the backyard. Four generations later, they have a beautiful facility with 320 employees.

Here's the view of the lobby. The lamp is made with elk antlers. The company uses elk for the handles of some of the knives. They have an agreement with the boy scouts in Montana who find the antlers shed by elk and send them to the company. 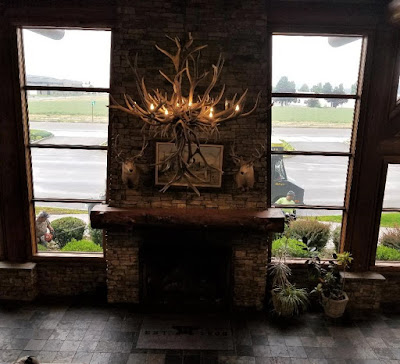 Pictures were not allowed on the tour. We saw how the knives are made. Much of the process is done by machines, but the final sharpening is all done by hand. The knives are warranted for life, and we saw a display of some of the totally rusted, burned and mangled knives that have been returned and replaced. The tour was free, but reservations were required. It was definitely interesting and worth a stop.

We're headed to three stops in Montana for the next 18 days. We were at Glacier in Montana several years ago, but otherwise have not seen much of the state. More exploring needs to be done!

Don’t wish upon a star – Reach for one!
Posted by RV Khronicles of Kevelyn at 9:46 AM No comments: