The entire time we were in Arizona this winter it only rained twice. It’s stormed three afternoons in a row here in New Mexico. They very much need the rain, but we’ve had some strong winds and heavy thunderstorms. I can do without those. It’s always a little scary. Today there were actually two tornado watches not too far from us. I didn’t know they even have tornados in New Mexico.

The pecan farm cannons were firing again today. They don’t fire anything out of them, just the sound is supposed to prevent hail. It’s the strangest thing, but we didn’t have any hail. The weatherman was talking about golf ball size hail in other areas so maybe they actually work. There was a beautiful rainbow after the storm today. Notice the puddles, we had quite a bit of rain. 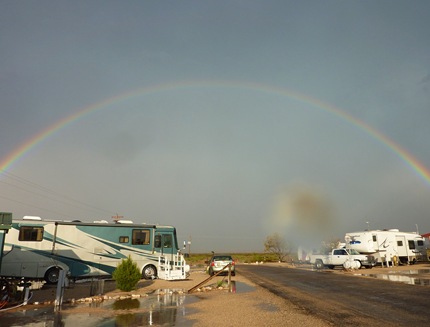 This morning we went for a walk around the park. There are some cacti growing on some of the lots that have beautiful blooms on them. I don’t know what kind they are, but they sure are pretty. 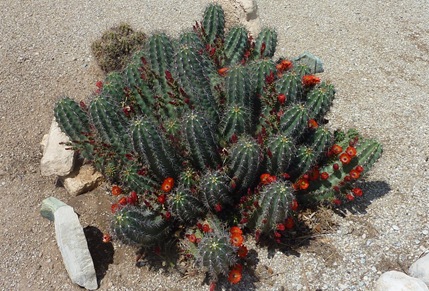 We’ve encountered many RVers with pets over the years including all kinds of dogs and cats. But, today we saw a pet we’ve not encountered before. This lady is Annette and she’s holding her pet parrot, Calliope. What a beautiful bird. I don’t know much about birds, but this one was snuggling with her and sure did appear to be affectionate. 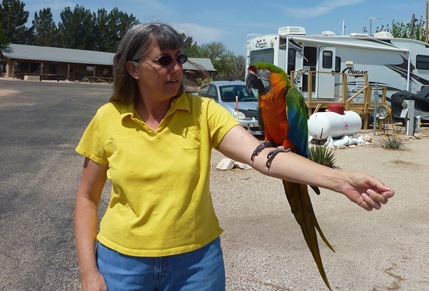 We’re leaving early tomorrow morning. Hopefully, we won’t encounter any bad weather on our trek back to Wisconsin.