It was so wonderful to see the sun this morning.  I woke up at 4:30 am and couldn’t fall back asleep, so I was able to witness this beautiful sunrise. 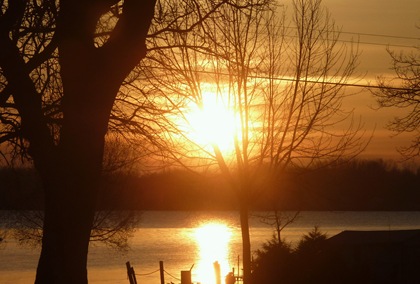 Kevin will say I couldn’t sleep because of “the” wedding that was being broadcast this morning.  But, that’s not it.  Although, I have been watching the whole thing.  Just saw “the kiss”.

I’ve been a bit grumpy the last few days because of problems we’re having again with electronics/technology.  We still don’t have our DirecTV working.  We’re waiting for the receivers they’re supposed to be sending us.

On Tuesday we purchased a new Mi-Fi from Verizon.  We’ve been using an aircard since last summer, but we couldn’t both be online at the same time.  We had tried a program called Connectify that is supposed to turn Windows 7 into a hotspot.  We had some success with it, but the program kept shutting down, and it just wasn’t working well for us.

Also, we were not satisfied with the company we’ve been using for internet service.  Last August I contacted the 3Gstore.com for help in setting up our internet service.  They were offering Verizon aircard service for $10 less than Verizon was charging.  I was under the assumption that this plan would be through the 3Gstore.  There would be a one-time charge of $99 to lease the aircard.

I didn’t realize the service was through a third party company called Group Access.  We were limited to 5GB of data per month and were able to check our usage online.  Unfortunately, Group Access sold our account to Coast to Coast Cellular a few months after we signed up.  It took weeks to get a new aircard from them and many phone calls to actually get it working.  Also, we were no longer able to check our usage online.

When I asked Coast to Coast about that, they said they were “working on it”.  We were never given any information on how to view our account online or find out what our usage was. In January we ended up going over our 5GB limit by about 1/2 of a GB.  That cost us an extra $125.

When I called to complain, I was given a user ID and login to view our account online and was told I could email them anytime for usage info.  That was the first we were ever told any of that. Due to the fact that we were never informed of how to check our usage, I asked for a one-time credit for the overage charges. Of course, they said no.  I have filed a dispute with our credit card company, and we’ll see what happens.

The lesson learned is don’t sign up with a third party internet provider.  Their overage charges are ridiculous.  I must also say that the 3Gstore has not provided any help with this, and basically told me “tough luck”.

So, back to Tuesday and the purchase of a Verizon Mi-Fi.  It worked for a few hours and then stopped working.  I called and found out their 4G network was down nationwide.  As of this morning, their network is back up, but our Mi-Fi is still not working.  So, I’ll have to call them again.  Luckily, I hadn’t cancelled the aircard yet so I still have internet.

The Mi-Fi is $50 per month with a 5GB limit.  Overage charges are $10 per each GB over the 5GB limit.  That’s a much more reasonable price for the overage fees.  We did have to buy the MI-Fi for $99 and a two year contract commitment.

Also, yesterday we had to spend another $800 on truck repairs.  One of the wheel hubs had to be replaced; something to do with the anti-lock brakes.

So, with gloomy weather and all of these problems, I’ve been in a bit of a funk, and couldn’t fall back asleep this morning. Hopefully, the sun will cheer me up.

Now, I know full well that these are little problems, and I should not be complaining.  When I see what devastation the tornados in the south have done, I know I am a very lucky person.

Unfortunately, I’m a worrier.  I truly believe I’ve learned to let things bother me less in this last year, but I still have a ways to go.  I’m working on it, but it’s hard to change who you are :)

Kevin just got up to go chase ducks off the roof.  Apparently, two ducks were walking around on the roof above the bed and quacking.  Too funny!  I needed a laugh :)

Posted by RV Khronicles of Kevelyn at 8:52 AM 4 comments: Links to this post