Fun With Friends in Dunedin

We left Naples last Monday with some difficulty. Our site was a pull-through, but they had put a large concrete post at the right front of the site making it impossible for us to pull through without hitting the post. So, Kevin had to back out on an S curve. He did an awesome job with me directing him on one side and a neighbor helping out on the other. We were glad to get out of there without any damage.

We took the I-275 bypass to avoid going through Tampa on I-75. The bridge is a toll bridge, but well worth it to avoid all the traffic and enjoy the beautiful scenery. 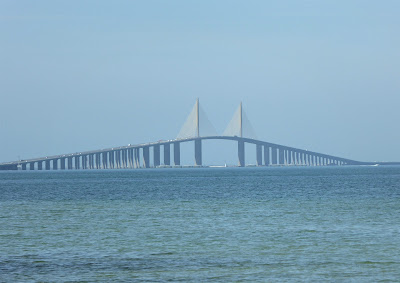 Along the way we saw this giant rubber duckie outside of a spa store. 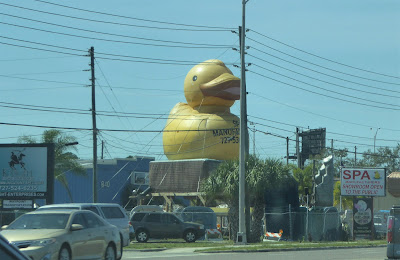 We came to Dunedin RV Resort to visit long time friends Sue and Alex. We've known each other since 1988 when they joined a camping club we belonged to. We camped together for many years and took some fun trips to national parks with another family and all of our kids. We've had fun recalling some of those memories.

They have been coming to Dunedin for five years, so are very familiar with the area. They took us on two wonderful bike rides. The whole area around here is excellent for bikers with trails that go from town to town. On Friday we biked 20 miles round trip through Dunedin. I liked this painted dolphin. 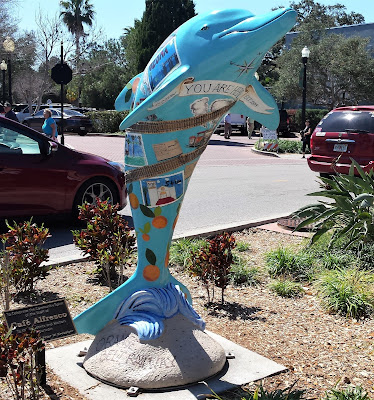 We continued on to beautiful Clearwater Beach. What an awesome area.  Here we are on the bridge to Clearwater. It was a steep climb, but worth the view. I can understand why Clearwater is such a popular tourist area. 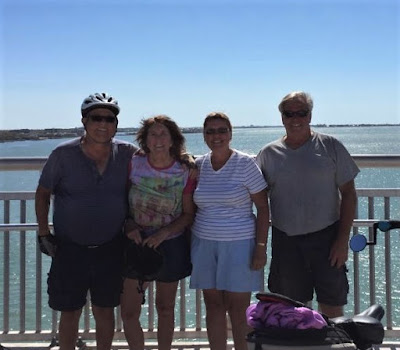 I looked through our photos from years ago and found this picture of the four of us in 1992 in Door County, Wisconsin.  It was taken at Thumb Fun Amusement Park which was replaced with condos long ago. 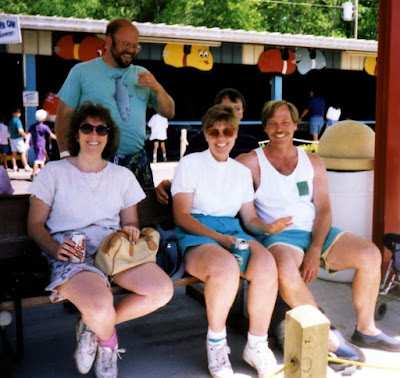 On the way back we stopped at a park for a bathroom break and a rest. 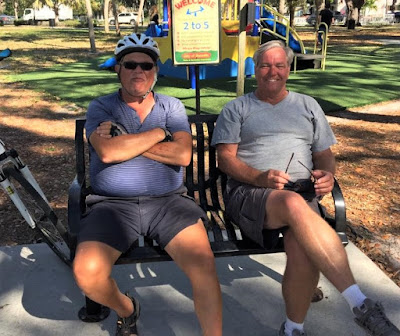 Here's a picture of Kevin and Alex together in Detroit in 1996 at a Packer Game. 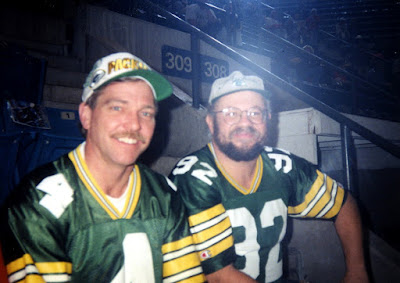 It's fun looking back. We've obviously all aged a bit, but are still enjoying ourselves!

On Saturday they took us on a 15 mile round trip bike ride to Tarpon Springs. It's interesting to see the history of the different towns. Dunedin was settled by Scottish immigrants. Tarpon Springs has a Greek heritage.

We had lunch at a dockside cafe. The gyros were delicious. Sponge diving was a major industry in Tarpon Springs. In the 1930s a disease wiped out a lot of the sponges, but they have made a comeback and are still being harvested. It is quite a touristy area, and there are plenty of sponges for sale.

This statue is a tribute to the divers who lost their lives. 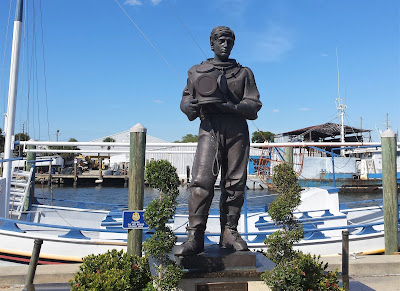 Sue has pictures of all of her family members in the big diving helmet, so we had to have our picture taken together. 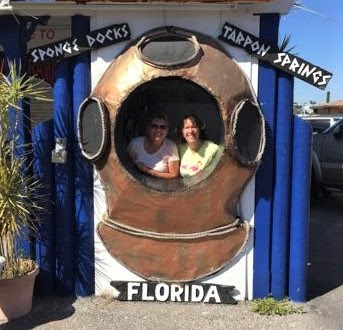 Kevin was thrilled to have his picture taken next to the big shark. 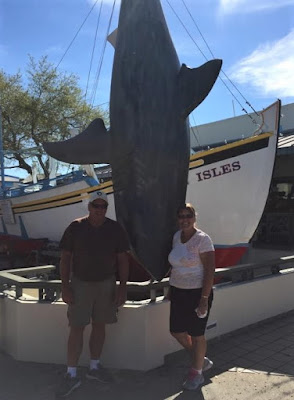 Today Alex's sister Cookie and her husband Tom are coming over for a cookout. They also winter in Florida and belonged to the same camping club in Wisconsin. I'm sure there will be plenty more stories and laughs as we reminisce about the good old days.

Don’t wish upon a star – Reach for one!
Posted by RV Khronicles of Kevelyn at 7:53 AM 3 comments: