Fun With Friends and Repairs

Happy Labor Day to everyone!

We had a good news, bad news kind of weekend.  The good news was that we had five couples that are friends of ours come and camp in our park for the Labor Day weekend. They are all friends from the camping club we belong to.

We’ve only been able to go to one campout on a Saturday this year and visit with everyone for the day. These friends came to us, which we very much appreciate. We had a great time.

The guys golfed a couple of times. The ladies did a little shopping. There was lots of laughter, eating, talking, drinking, game playing, exercise walking and campfire time. I think everyone had a great time. I know we sure did.

Now for the bad news part of the weekend. On Thursday morning Kevin put out our electric awning. It was getting a bit breezy so I pushed the button to bring it back in. It moved a little bit, but wouldn’t retract.

I called Kevin over, and he took a look at it. The motor was definitely working, but for some reason it wouldn’t retract. I got out our owner’s manual stuff and found the Carefree awning booklet. I was actually pleasantly surprised to see that the mechanism had a four year warranty. Our four year owner date will be October 17th.

I called Carefree and finally got a customer service person. She then talked to Kevin, and he explained what was wrong. At first she was telling him to try and roll it up manually and secure it to the 5th wheel with duct tape or rope or zip ties. She said “be creative” when asked how to keep it rolled up. What???? That just sounded like a major accident waiting to happen. There was no way we thought the awning could be secured to the side of the trailer with duct tape!

Kevin kept talking to her and the more he explained it, she said she thought the gears in the end cap might be stripped. She suggested taking off both end caps and switching them around. That should allow the motor to engage with the gears and retract it. This was not a one or even two person job. Luckily, we had five other guys here this weekend.

So, Kevin strapped the awning down to keep it from blowing away until our friends could help him. Of course, it had to be windy on Friday and Saturday so they didn’t feel it was a good idea to try. Finally, on Saturday evening the wind died down enough to give it a go. It took some doing, but they got the end caps switched out. I said a little prayer and pushed the button. Yahoo, it worked. It will not be coming back out until it is properly fixed.

The Carefree customer service lady told Kevin that they would replace the entire motor assembly. They have redesigned it since our awing was installed. It sounded like there were problems with the old design. Here’s a picture of the part that had to be switched out. It’s the round cap with the two screws in it inside of the big plastic end pieces. 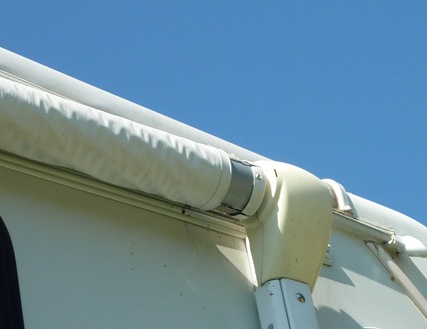 Tomorrow I’ll be calling Carefree’s warranty dealers to see when we can get it fixed. The closest ones are in Madison which is 30 miles away. We’ll have to take it in before we leave on October 8th.

On Saturday our friend Joan noticed a puddle under our 5th wheel. Now where could that be coming from? (The hose next to it was not leaking). 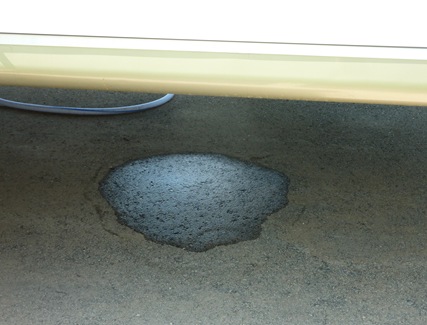 Kevin opened the basement door and started investigating. Friend Jim was helping him. It turns out the pump that we had to have replaced in July was leaking. This will be the third water pump in four years. This one has only been in there for two months, and we haven’t even used it.

I fired off an email to Shurflo today so we’ll see what they have to say. I must say we are very frustrated and disappointed with these water pumps. Hopefully, we’ve just had a string of bad luck. I certainly would not find it acceptable to have to be replacing the pump every year or less!

On Sunday the guys went golfing. Kevin came home with his driver looking like this. 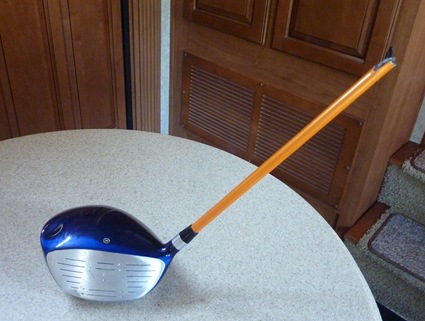 He dropped his bag while loading the clubs into the truck, and the shaft snapped in half. At least it was after the round.

That afternoon Anne and Ralph’s truck wouldn’t start. After a jump start from Dave, it started up. Looks like they need new batteries. I sure hope that’s the end of stuff breaking down. At least our awning is under warranty, and the pump better be. But, its frustrating to say the least. We realize that’s part of this life. We are using our 5th wheel more than is the standard. But, enough for a while.

The weather this weekend was still quite warm, with a few days at or near 90 degrees. That’s par for the course this summer. We started out with 90s on Memorial Day weekend and it hasn’t stopped. Hopefully, some cooler days are ahead.

Posted by RV Khronicles of Kevelyn at 7:20 PM 5 comments: Links to this post