We left Fairbanks via motor coach for the 3.5 hour trip to Denali National Park. We spent two nights at the McKinley Chalet Resort on the outskirts of the park. Our entire trip was with Holland America land and sea package. We were surprised to find out that they own the hotels we stayed at, the buses, and train cars we were in. It is quite a smooth and well run operation.

We were in Alaska at the summer solstice time. I never did get over the fact that there was 22 hours of daylight. Here is the scenery from our hotel at 10 pm. The sun is still shining on the mountains. 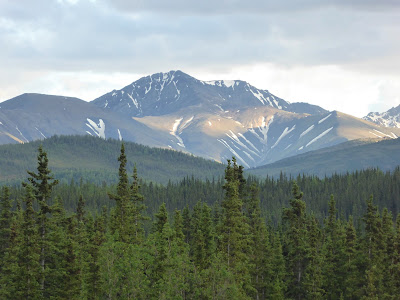 The next day we took the 8 hour Tundra Wilderness tour with the National Park Service. Our driver was great, and found lots for us to see. As we came around a corner, he pointed out the first chance to see Mount Denali. At first, I didn't see what he was referring to. I thought it was clouds, but it was actually the mountain in its full glory. At this point, it was about 80 miles from us. 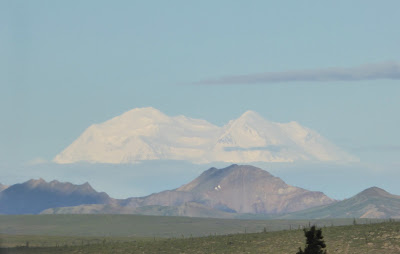 He told us he hadn't seen it in almost a week. The mountain is 20,310 feet above sea level, the highest point in North America, and creates its own weather system. It is only seen in any part about 30 percent of the time. We were so lucky to see all of it, which only happens about 5 percent of the time.

We had several more opportunities to see it on the route. We also saw the four big wildlife animals; grizzly bear, moose, Dall sheep, and caribou. Some of them were at quite a distance. Our bus had a camera that could zoom in on the animals, and then the driver put it up on screens inside the bus.

Here's a grizzly mom and her cub we saw twice as we made our way to the turnaround and back again. 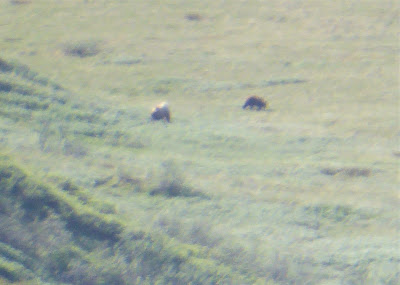 Next up were caribou. We had several sightings of them. They are the most likely wildlife to see on the tour. 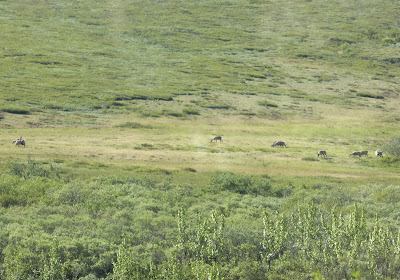 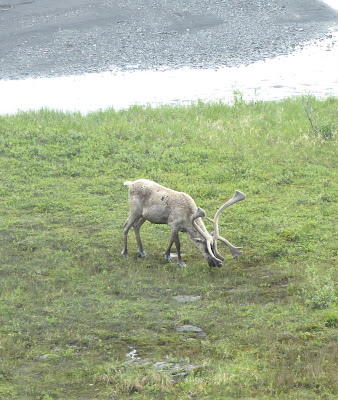 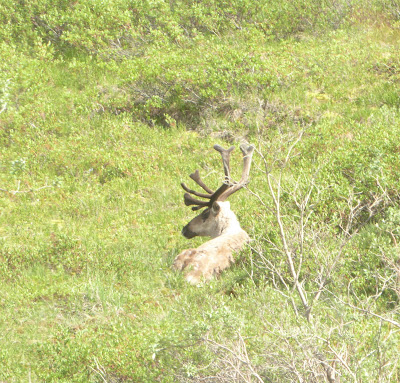 As we got closer to the turnaround, we saw Mount Denali a few more times. Our driver was pushing to get to the turnaround, which would be the closest view of the mountain, about 40 miles away. He said the weather could turn in a few minutes, and it would disappear.  As you can see in this picture, a few clouds were already creeping in. 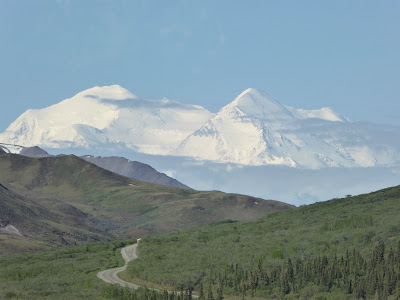 We agreed to skip one of the stops, and catch it on the way back. When we got to the turnaround, there were already clouds beginning to obstruct the view. We still had a great view, and took lots of pictures. 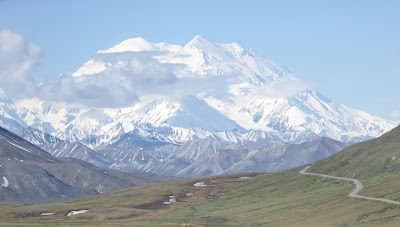 Here are Kevin and myself with the mountain to the right behind us. 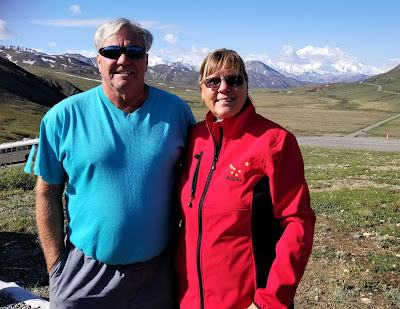 Buses that arrived about 15 minutes after we left reported that the mountain had disappeared. We were so fortunate to see it as much as we did. On the way back, we spotted Dall sheep twice. 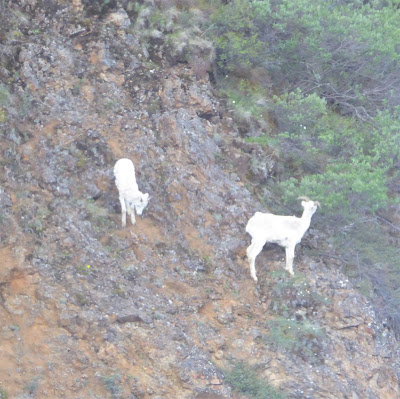 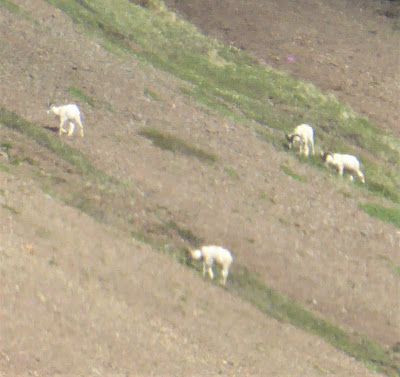 And this moose was sitting on the ice by himself. 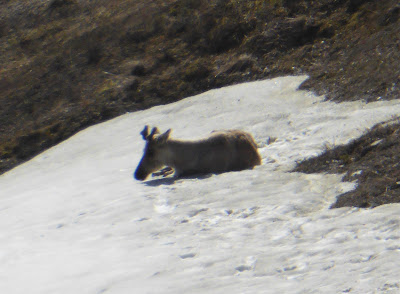 At one of the stops, they had moose and caribou antlers to examine. There was only half of a moose antler, and it was so heavy, I could barely lift it. 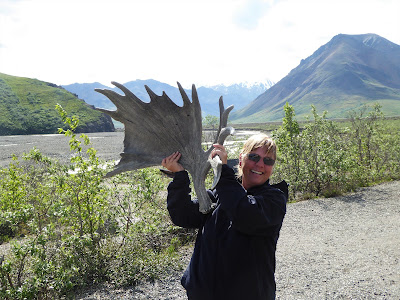 The caribou antlers were much lighter. I'm glad I don't have to carry that rack around on my head. 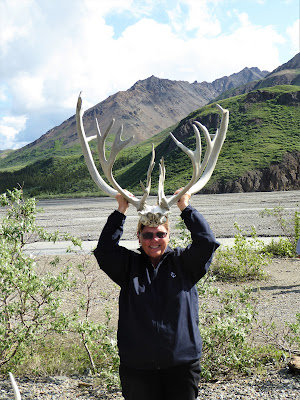 We stopped at a couple of scenic overlooks. The scenery in Denali is magnificent. Pictures definitely don't capture the overwhelming beauty of it all. 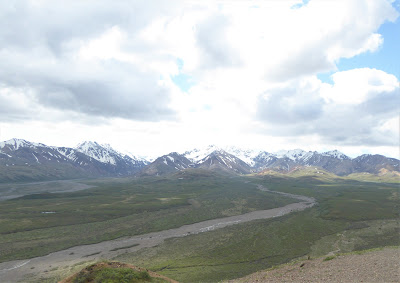 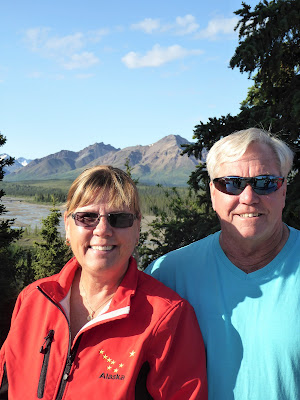 We had dinner at one of the McKinley Chalet complex restaurants that evening. Both of us tried a caribou burger. The waiter told us they add beef fat to counteract some of the gaminess of the caribou. It tasted like a beef hamburger to us. 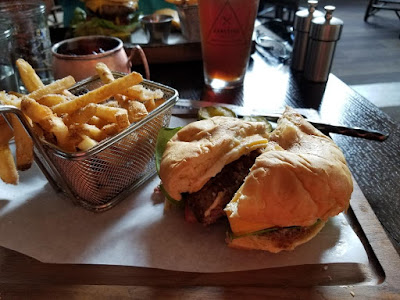 Our stay at Denali was everything I had hoped for and more. It was my favorite place on the trip. Actually, my favorite part was the scenery all over Alaska. Each day brought more beauty. It is impossible to describe or capture in pictures, but it is a memory that will stay with us forever!

Don’t wish upon a star – Reach for one!
Posted by RV Khronicles of Kevelyn at 11:20 AM No comments: