We Survived Week One

Week one at Amazon went very well. This year they have implemented a new procedure where work campers have a hardening week. That means only working half shifts your first week. For us that was 5 pm to 10 pm on M, T, Th, and Fr. If it was up to me, I’d like those hours the entire time I was here. Of course, that would also mean less than half the pay once overtime kicks in.  On Monday we’ll start our full shifts of 5 pm to 3:30 am.

I’m loving the picker job. Its much better than the packing jobs we had last year for two reasons. One, it is very noisy in the packing plant, not so much in the rest of the warehouse. Two, we’re moving rather than standing in one spot.

The first week they program the computer to lock you into a limited area to do your picks so you can get used to how it works. We were in an area of mostly small items like books, DVDs, CDs, and all kinds of bottles of pills and supplements. With the use of MP3 players and iPods, I’m surprised how many people are still buying CDs. We both had no problem meeting and exceeding the quotas set for us.

Next week they’ll release us to pick in half of the warehouse. The following week we’ll work the entire one million square foot facility. That’s when I’ll start wearing my pedometer to report on how many miles we actually walk. We’ve been told it will be around 15 miles per shift. So far, our feet are holding up very well. I’m sure once we are running around the entire warehouse, they will start complaining much more!

We’ve gotten our first paycheck for the week of orientation. They only paid us for one of the days, so I had to send an email to try to get that resolved. Mike in HR replied that he would take care of it. We’ll see how that goes.

On Wednesday the campground owner hosted an Oktoberfest get together. He provided brats and beer and campers brought dishes to pass. There is not a clubhouse building at the campground. The foundation is poured, but the building has not been built. Everyone brought chairs and we sat on the foundation. Luckily, the weather was warm although pretty windy. I’d estimate there were about 75 people who attended. They had gotten donations from local businesses for door prizes. We won a gift certificate for a free large pizza at Pizza Hut. There is a new owner of the campground this year, and it sure was nice of him to host this event!

The weather has been very strange. The first part of the week was hot with highs in the 80s and very humid and windy. We had to run the air. On Thursday morning a cold front came through and dropped the temps by 40 degrees. We went from running the air in the morning to turning on the heater by late afternoon. There is a freeze warning in effect for the next few nights. Kevin disconnected the hose and we’re using water from the tank. Last year it didn’t get below freezing until December. The extended forecast is looking pretty good, and the winds have finally died down!

I like to cook using my crock pot, but the clean up was always a pain. Last summer, Kevin noticed our friend Betty using a product that has made the clean up so easy. These crock pot liners are only about 50 cents a piece and so worth it. Why didn’t I know about these sooner??? 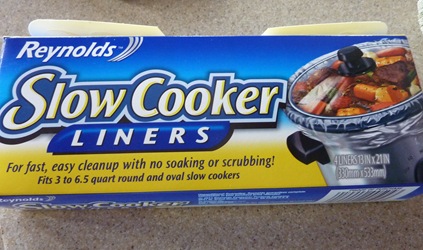 We don’t have any big plans for the weekend. Kevin is going to take the fourth original tire off of the fifth wheel. There is a Goodyear dealer in Independence where we will get a replacement. I’m still waiting for an estimate from Burlington RV so I can submit our claim to Goodyear.

I’m going to find a movie to rent at Redbox. Other than that, we’ll rest up for the big week ahead.

Posted by RV Khronicles of Kevelyn at 9:58 AM 8 comments: Links to this post