Yesterday we toured Mardi Gras World, a family owned company that builds floats for many of the Mardi Gras parades in New Orleans each year. 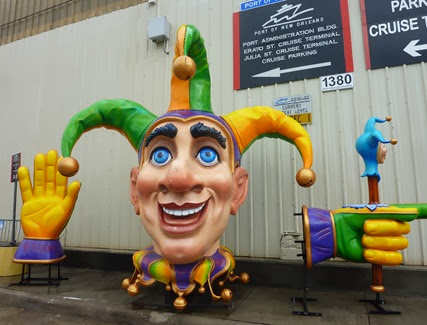 We had no idea what a big business Mardi Gras is in this city. There are over 50 clubs or organizations called krewes that host parades. Each parade must have a minimum of 14 floats to receive a permit from the city. The basic cost for an undecorated float chassis is $50,000. Once a krewe owns the chassis, they spend an additional $5,000 to $10,000 per float each year to have them redecorated.
Members pay dues of between a couple of hundred to a couple of thousand dollars to support the krewe. They fundraise and work year round to raise money for the parades. That’s a real commitment for one parade each year.
Mardi Gras parades started in New Orleans in 1857 and have continued to grow. The tour lasted for about an hour. It started with a chance to try on some hats and costumes. Then they gave us a taste of King Cake, a popular dessert during Mardi Gras. It tasted like a cinnamon coffee cake. Then they showed a short movie explaining the origins of Mardi Gras and this company which builds some of the floats. 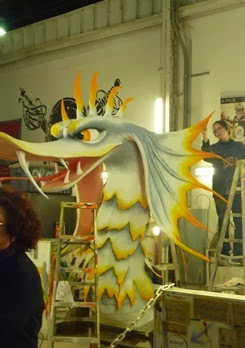 Then we went out into the warehouse and saw the artists actually building props for the floats. It’s amazing what these people do with some wood, Styrofoam, paper mache and paint. They save all props from each parade each year and recycle many of them. They have numerous warehouses throughout the area to house all of this stuff. This company builds floats for sixteen of the krewes including all of the biggest with the most lavish floats. They also do some commercial work with fiberglass statues including the cows currently on billboards all over the country for Chick-Fil-A.
Here are some of the floats that will be in this year’s parades. 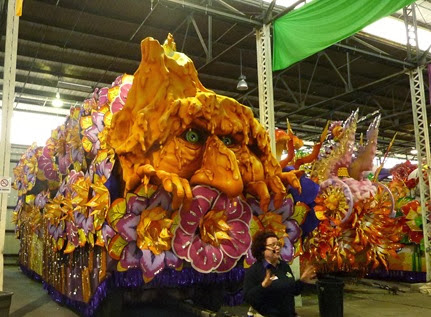 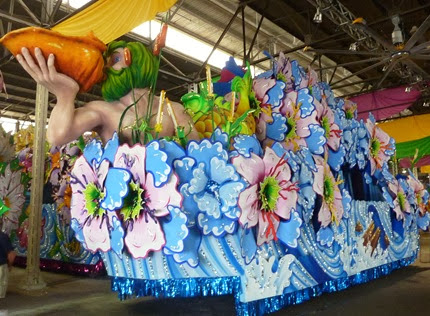 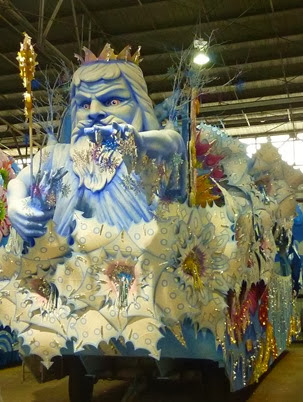 They are absolutely beautiful. It’s amazing what can be done with some simple materials and lots of paint. This was my favorite. We really enjoyed this tour and learned a lot about the whole culture of Mardi Gras. Here are just some of the many props sitting around in the warehouse waiting to be used again in a future parade. Most of them are quite large. 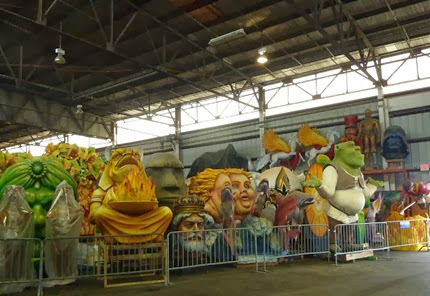 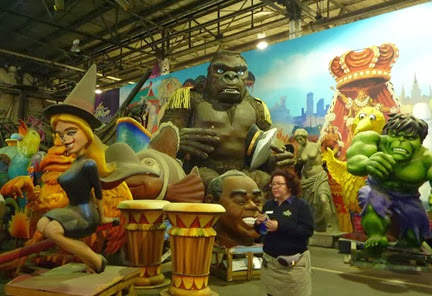 After our tour, we headed to the French Quarter to meet up with our guide for a walking tour. This was the tour we were supposed to do two weeks ago, but the guide never showed. She was there this time, but the weather was kind of drizzly so we were the only people on the tour. She was very good, and we enjoyed our private two hour tour. She told us lots of interesting information about the history and people of the area.
I saw this interesting sign on a condominium for sale. I wonder if the price is higher or lower for a haunted house??? 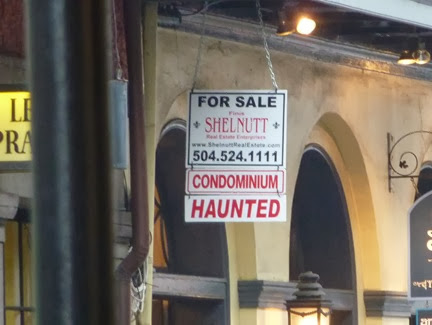 By the way, I was able to meet the German couple that was next to us in the unusual off road RV that I wrote about in my last post. We spent about five minutes conversing in German. It was fun to exercise my German language skills again, and we were able to understand each other. It cost them about $5,000 to have their RV transported on a ship from Antwerp to Halifax. Wow!! They are on a ten year world tour, but have to fly back to Germany every six months for a month to renew their visas. That’s adventurous!!!
Don’t wish upon a star – Reach for one!
Posted by RV Khronicles of Kevelyn at 6:12 PM No comments: Links to this post