It has been very interesting watching a pair of Red Tailed Hawks living in our park this summer. We first noticed them when they built a nest in one of the tall trees in spring. 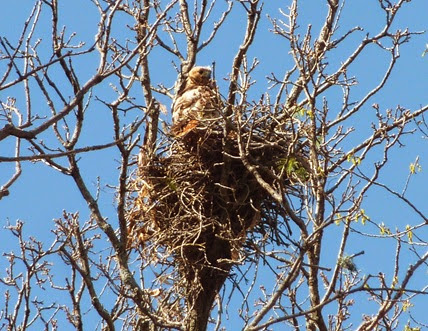 We’ve also seen the adults sitting on the ground or on wires or in trees for long periods of time. They don’t seem to be bothered by people getting near to look at them or take pictures. A few times we’ve seen them tearing away at some small creature they’ve captured. One day Kevin found part of a dead squirrel at the base of their tree.

It’s quite interesting to see these magnificent birds so close for such a length of time. Usually, we see them along the side of the road as we travel sitting on a post or soaring above. I’ve never heard them screech like they are. 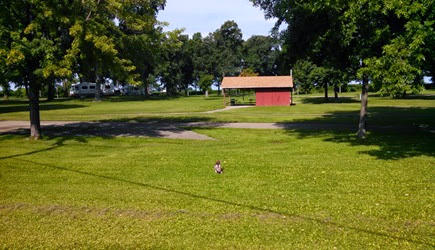 I did a little research and found out that the hawks stay near the nest with the offspring for a few months, so I think they will be here until fall. They also come back to the same nest sometimes, so we may have them back next year.

The last few weeks we’ve seen three boats with large nets on them parked at a nearby private boat launch. Last weekend while we were out walking, there were three guys working with the nets. 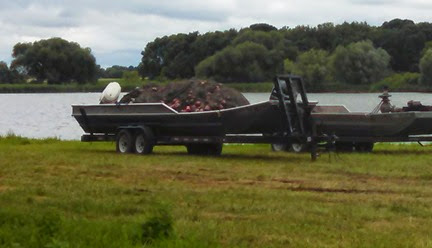 Around here people hate the carp and wouldn’t dream of eating them. Apparently, there is a good market for them on the east coast. This is a win-win situation. Beaver Dam lake has way too many carp, these guys take them out of the lake and make a profit, people on the east coast get to eat carp.

I’ve mentioned before that I was born in Germany, and my parents immigrated when I was eleven months old. So, it was with pride that I watched my birth country Germany win the World Cup soccer match on Sunday. I know the Germans take their soccer very seriously, and I’m happy for them!!

Yesterday we had a record low maximum temperature for July 15th of 66 degrees. I actually had to turn the heat on. It got down into the high 40s at night. Our son Eric would much rather have these cool temperatures than the heat. So, at least he’s happy. The rest of the week is supposed to get warmer and be quite nice.

I’ve been working on some quilt projects. I finished my first attempt at machine applique and was quite happy with it. I had planned to use it to hang over the back of the couch. When I was visiting Korey, he asked me if I could make a donation to a quilt auction his camp has every summer. Last year they made over $100,000 through the auction.

I had taken my project with me to finish hand sewing the binding in place. So, I finished it and left it with him to donate to the auction, which takes place on July 26th. They have 400 quilts to sell. Wow.  I guess I’ll have to make myself another one.

Thursday I’m headed back to Eric’s to do some more painting. The ceilings are done. Next, I’ll be doing the baseboards and window trim. Then, the walls. Hopefully, I’ll be done before we leave in October.

Posted by RV Khronicles of Kevelyn at 7:37 AM 3 comments: Links to this post