Today was another gorgeous day, made even better because it was spent with family.

In the morning, we rode our bikes in the opposite direction we traveled on the bike trail yesterday. We ended up in Cedar Falls. Much of the trail is along the banks of the Cedar River, very pretty. I just love these bike trails.

We came upon the Ice House Museum in Cedar Falls. It was closed, but had an information sign. This large icehouse was built in 1921, is 100 feet in diameter, and 30 feet high.  In it’s day it stored 6,000 to 8,000 tons of ice harvested from the river.  The blocks weighed up to 200 pounds and could last up to 12 months stored in the sawdust. The last ice was harvested in 1934. In 1975, funds were raised and the building was restored. 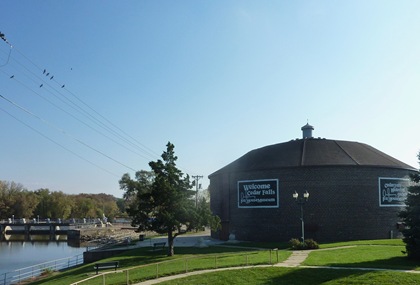 Our ride also took us through Island Park. I saw this building with the sign that says Island Park Beach House. I was joking with Kevin that it was the smallest beach house I’ve ever seen. 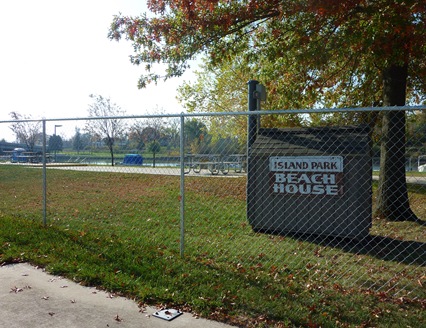 It turns out there was a lovely beach house built along the shores of the Cedar River in 1920. Sadly, it fell victim to the terrible flooding this area experienced in 2008 and was demolished. Here’s a picture of what it looked like in the 1920s. 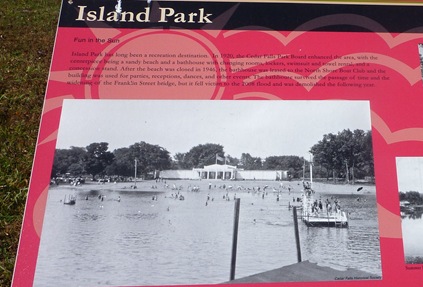 I saw this huge bird in one of the trees in the park. I thought it was possibly an owl. After zooming in, I think it’s actually some type of hawk. It was really big. Maybe my blogger friend, Judy, will know what it is. 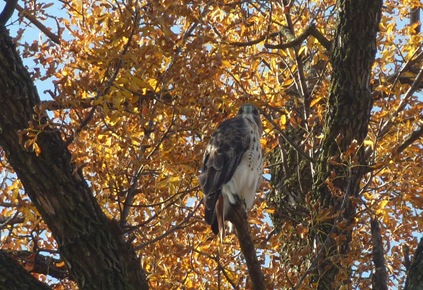 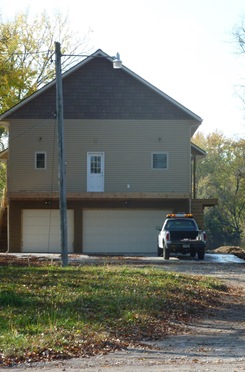 Kevin noticed that all the houses along the river have a unique architectural style. The first level is the garage built out of concrete block. The main living area is built above the garage. Kevin’s brother, Joe, told us that there is frequent flooding along the river, and these homes are built with that in mind. Interesting.

We had made plans to golf with Joe so we met him and his wife, Julie, at their house in Waverly and headed to the golf course. Kevin, Joe and I golfed, and Julie rode along in the cart with Joe. Kevin and Joe haven’t golfed together in many years, and I think they really enjoyed themselves. I didn’t play very well. The course had many rolling hills. I felt like I was always standing on an incline, and my fairway shots were not good. Oh well, it was such a nice day, and we had a good time anyway.

Joe and Julie took us on a tour of their workplace. They both work at Wartburg College.

Julie took a vacation day, and Joe doesn’t have classes on Tuesday, so was able to arrange his schedule to spend the afternoon with us. Julie works in the IT Department, and Joe is a Math and Computer Science professor. Here’s Dr. Breutzmann in his office. 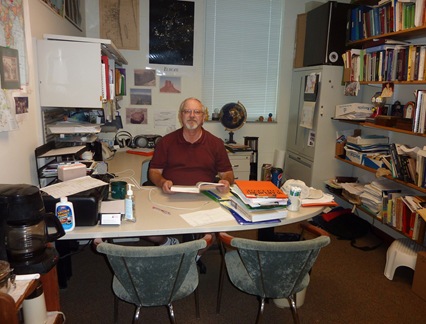 Waverly also has a bike path, so we walked a portion of it along the Cedar River. We spent some time visiting at their home, and then they treated us to dinner at a great Mexican restaurant in town. Their son, Robert, was able to join us for dinner. Thanks for a great day! 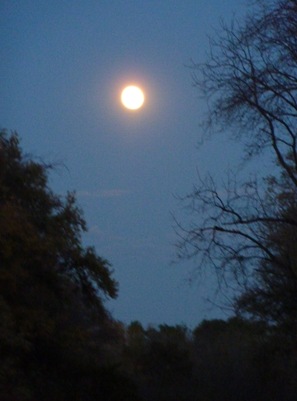 A full moon was just coming up as we arrived back home. A beautiful end to a perfect day.

I had to laugh at the comment fellow bloggers, Kevin and Ruth, left yesterday. They wanted to know why we paid an extra $5 a day for a full hook-up site. I had that same question. We’re only here for 2 nights, and I thought an electric only site would be just fine. Kevin had other ideas. He told me he didn’t want to have to spend the time filling up with water when we got here, and he didn’t want to guess how much water to put in, and he didn’t want to tow with the weight of extra water when we left, etc., etc., etc. None of it made sense to me, since he’s done all of that in the past. Well, after a little teasing, he admitted that he’s on vacation this week between his job in Wisconsin and Amazon, and he just didn’t feel like messing with the water. I get it, that’s just fine. We tend to be frugal, too; but sometimes you just want to splurge a little. This was Kevin’s little splurge :)

Posted by RV Khronicles of Kevelyn at 8:26 PM 2 comments: Links to this post

Yesterday we had an uneventful drive from Beaver Dam, Wisconsin to Cedar Falls, Iowa. It was another beautiful day with highs in the 80s. I love uneventful driving days!

We’re staying at Black Hawk Park. It’s a county campground, and is very nice. We have a full-hook up site with 50 amp service for $22 a night. They also have electric only sites for $17. 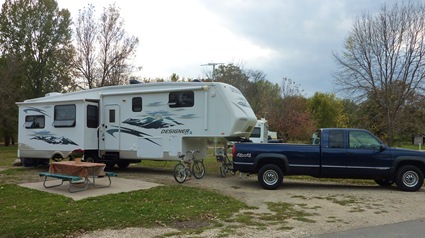 We’ve heard that Iowa has lots of bike trails. That’s the case at this park. There are miles of bike trails that go through this park. You can ride to many of the surrounding cities. Yesterday we rode for about an hour. The trails are paved, and it was a great ride. We went to Big Woods Lake Park. There is another county campground there. I’m loving these bike trails. Today, we’ll ride in the opposite direction we went yesterday and see what we can find.

The main reason we stopped in Iowa on our way to Kansas was to visit Kevin’s brother, Joe, and his family. Last night Joe and his youngest son, Robert, came for a visit. Joe’s wife, Julie, was at a meeting, so we’ll see her today. We cooked hot dogs and smores at the campfire and had a nice visit. Today, we’re driving up to there house in Waverly.

Posted by RV Khronicles of Kevelyn at 8:43 AM 2 comments: Links to this post