The weather was sunny and in the 60s on Monday morning, a great day for a bike ride. I had read there was a bike trail and birding center a few miles south of us.

We rode about two miles south and that put us pretty close to the Mexican border. We found the bird center, but didn’t want to pay the $5 per person entry fee to ride on their bike trail. We’ve found that most of the time when we pay at these types of places, we end up not seeing anything.

We rode our bikes along a dirt road next to a canal. There was another dirt road on the other side of the canal, and we saw Border Patrol vehicles driving up there.

We saw some butterflies and one Great Blue Heron along the canal. The heron was very shy. Every time I tried to get near to him to take a picture, he would fly away. He was absolutely beautiful in flight, but I couldn’t get a picture of him flying. I did manage to capture him as he was hiding in some tall grass and bushes. He’s right in the middle. If you click on the picture, you can get a bigger view. 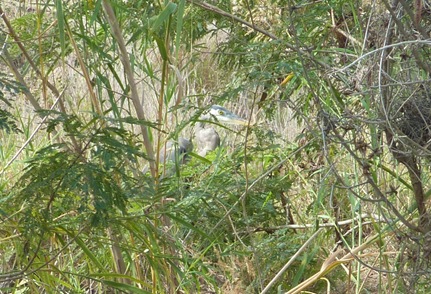 We turned around and Kevin found a sign for the bike trail. It was on the other side of the road so we headed back the way we had come. We passed a couple of RV parks and rode in to take a look.

At Bentsen Palm Village RV Resort there was a group of people taking pictures of this amazing Coopers Hawk. He was just sitting there posing for pictures. I couldn’t believe how close people got to him without bothering him one bit. It really helps that we are in the birding center of Texas. Just ask anyone around, and they can tell you the type of bird you are looking at :) 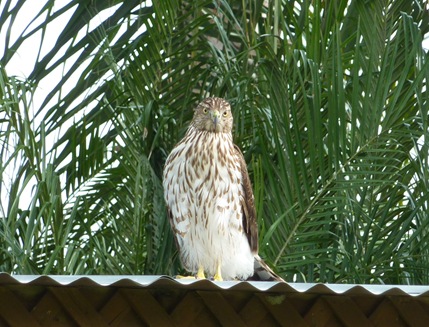 Bentsen Palm Village RV Resort is a beautiful resort. They were awarded National Park of the Year in the medium category by the National Association of RV Parks and Campgrounds. I can see why. For $60 more, we could have stayed there. It would have been well worth the money. Even at this award winning park, there were sites open. There have been open sites at every RV park we’ve seen.

At Santa Ana Wildlife Refuge I saw that they put out oranges for birds, so I put out some of the oranges and grapefruit I found on the ground in our park. I don’t know what kind of bird this is enjoying the fruit, but there are a bunch of these guys hanging out in the bushes along the edge of our site. They sure are a noisy bunch. 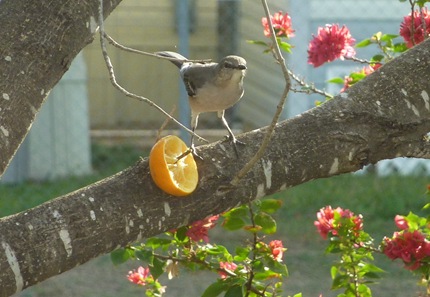 Kevin was sitting outside reading and called for me to come outside. I had told him if he sees any colorful birds to  let me know. There were a bunch of green birds in a large tree in the site across from us. I grabbed my camera and started taking pictures. 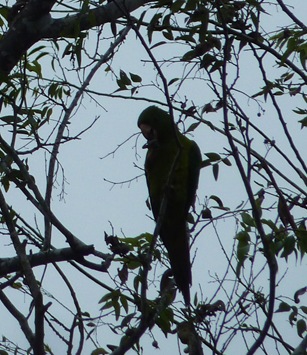 They look like parrots! That can’t be, parrots live in the jungle in South America, right? Pretty soon there were lots of other people outside taking pictures, too. I walked over to them and asked if they knew what kind of birds these were. They told me they are Green Parrots. One of the ladies has been looking for them for a month. How cool is this!!

Get ready for a bunch of pictures. Unfortunately, clouds had rolled in so the pictures aren’t great. 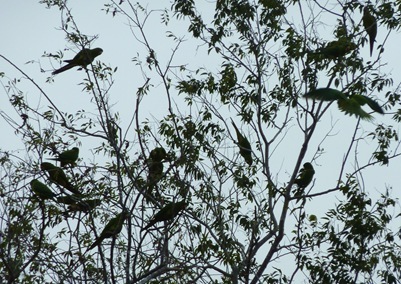 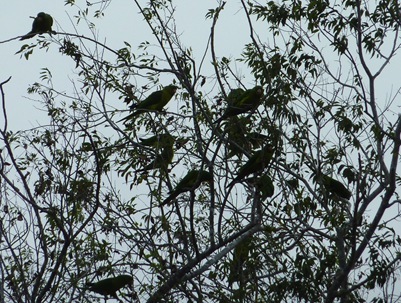 The tree is a Hackberry Tree. Apparently, the parrots like to eat the berries. There is a lot of clicking noise when the parrots are in the tree. I wonder if the berries have a shell.

Every once in a while, the whole flock would rise up and fly around and then settle back in the tree or the power lines next to it. I counted over 60 of them. They make a huge racket when they fly up together. 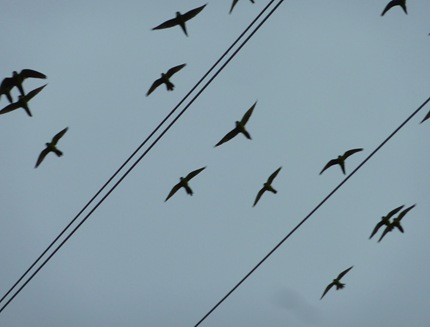 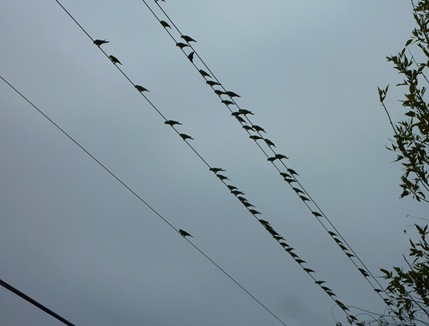 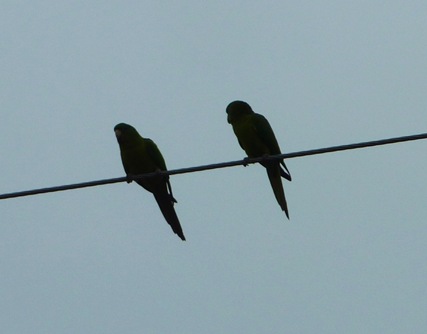 This morning I heard a lot of bird racket outside. I looked outside and the Green Parrots were back. This time they were in a Hackberry Tree in the site behind us. I was watching them right outside our big back window. This is amazing!!

Hopefully, they’ll keep coming back so I can get pictures on a sunny day. The forecast is for rain today and tomorrow with possible severe thunderstorms. 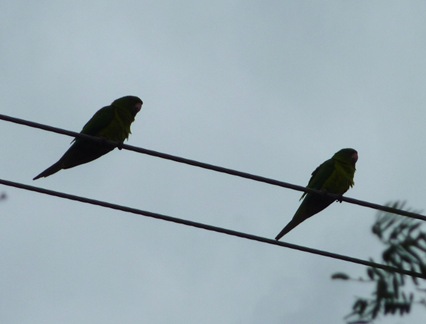 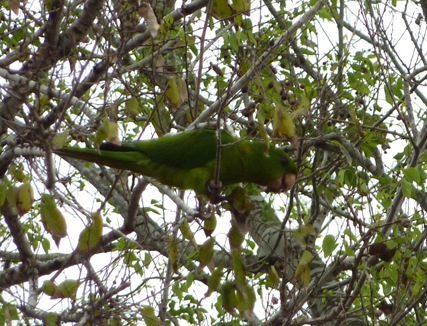 I do not consider myself to be a birder. However, I can see how this bird thing can become addictive :)