In my last post, I mentioned that we were taking our fifth wheel to Budget Truck and Auto in Janesville, Wisconsin to get the front and end caps painted. Both are dark brown and began oxidizing by the second year we owned it. It is a 2014 Jayco Pinnacle with a two year warranty, so Jayco agreed to pay for us to get it painted. It took quite some time to find someplace that would do a quality job in a time frame we could accept.

We were told they could do it in seven business days, but it actually took two weeks. Our dear friends allowed us to stay at their summer home across the road from the park we work at, so that worked out great. I don't know what we would have done without their generous offer. It was actually kind of nice walking over to the park to work our part-time hours and not be here all the time. A nice break for us.

We picked the fifth wheel up on Monday, and are very satisfied with the result. It looks 100% better. While I was coordinating this project with Jayco, they were being difficult about shipping the proper decals the the repair facility. I finally asked if we had to have the Jayco decals in order to have it paid for under warranty. They said no, so we decided we didn't need the Pinnacle decals on the front and back. The repair facility created a decal similar to the one that was on the front, only a little bigger as there wasn't going to be anything else on there. We think it turned out very nice.

Here are the before and afters. The first two pictures are before. You can really see the oxidation on the close up. 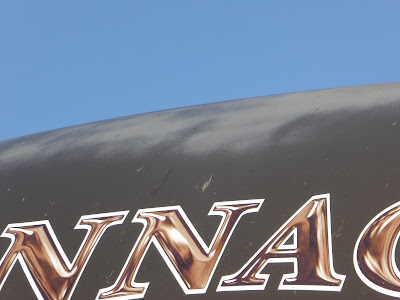 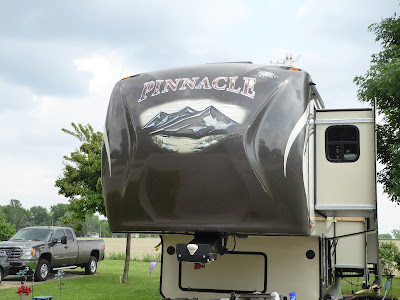 Here's the front after. 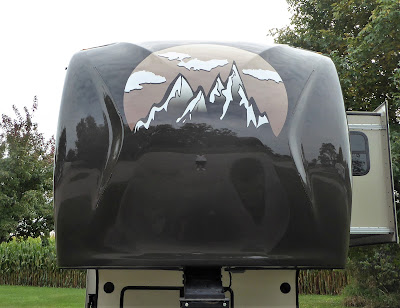 The decal is similar with the mountains, and we're fine not having the brand name up there. 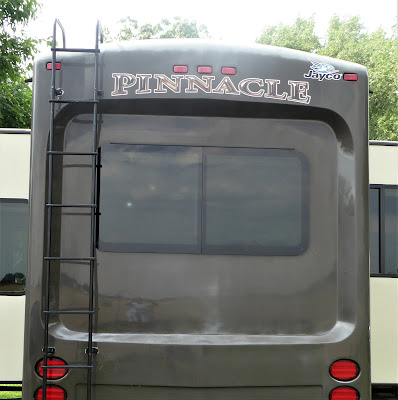 Here's the back now. Again, we don't care that it doesn't say Pinnacle on it. 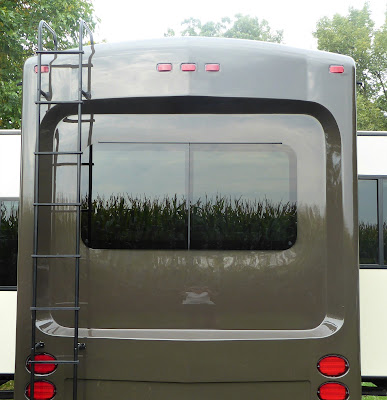 It's so shiny, everything is reflecting off of it. Can you tell we have a corn field behind us. Budget Truck and Auto were excellent to work with. They told us the reason so many brown trailers are having the oxidation problems has to do with the Gel Coat manufacturers are using. It is now coated with Clear Coat which is used on cars. Now we have to wax the sides so it is shiny all over.

The pictures really don't do justice to the amazing difference in how it looks. Although it was a pain, we're really glad we had it done. Especially since Jayco paid the nearly $4,000 bill.

While it was there, we had all four tires replaced from China bombs to the new Goodyear Endurance tires. We've heard good things about these tires, and hope we don't end up with more blow outs.

We have twelve days left here at the park in Wisconsin, and then we're out of here. Not like I'm counting down or anything. The weather the last week was insanely hot and humid for late September. We had temps in the 90s for several days, with many records being broken. As is typical for Wisconsin, we had a 30 degree temperature swing today with a current temperature of only 62. I'm not complaining. I like cool fall days. But, we went from air conditioner running all day the last few days to fireplace running today.

We're taking two weeks to get from Wisconsin to Yuma, Arizona; visiting friends and family along the way in Iowa and Nebraska. On October 26th, we're flying out of Phoenix to the Riviera Maya in Mexico for an all-inclusive five night vacation with our kids. That's our 40th anniversary trip, and I'm really looking forward to it.

Don’t wish upon a star – Reach for one!
Posted by RV Khronicles of Kevelyn at 2:42 PM 3 comments: Links to this post