Attacked By A Tree

Yesterday was not a good day!!

It was travel day. Since we’ve had a few tire episodes on travel days over the past few years, I’ve come to dread these days. I get really nervous, and usually read while Kevin drives to keep me distracted.

Yesterday was one of the shortest travel days we’ve had, moving from San Antonio to Kerrville, only about 70 miles. I had made reservations at Hill Country RV Park in Kerrville. It’s Spring Break week for all of the Texas schools, so I felt a reservation was a good idea for this week.

I rely heavily on the website RV Park Reviews when researching places to stay. This place had two reviews with an 8 and a 9 out of 10. What were these people smoking?? I also check the campgrounds website for more information. This place had a nice website with good pictures. They also state the following on their website:

AGE AND CONDITION OF RIG:
We prefer to have camping rigs that are less than 15 years old within the park. This is to keep up a nice modern park environment for all users. Special arrangements can be made with the management on a case by case basis if your rig is older. If your rig is becoming run down or is in need of repair, we reserve the right to ask you to perform the repairs or ask you to remove the rig from the park at our sole discretion.

When we arrived, we were quite disappointed. I would say 90% of the trailers in this park are over 15 years old. Most of them look to be permanent residents. The place looks pretty run down. There was no one here to check us in even though we had a reservation. One of the permanent residents was nice enough to come out and talk to us. He called the camp host who told us to take any open site.

There were only two open sites, both of them back ins. We decided to stay since it was only for a week. There are large rocks at the side of the road at each site, and there is a loop road to get to all of the sites. Kevin felt it would be best to go around the loop and come at the site from the opposite side to be able to back in without hitting the rocks.

There is a very large tree on one side of the road. Branches had been cut out of it so it looked like it would be okay to drive under it. There were some large units at the back of the park, so we figured if they got in, we’d be fine too. 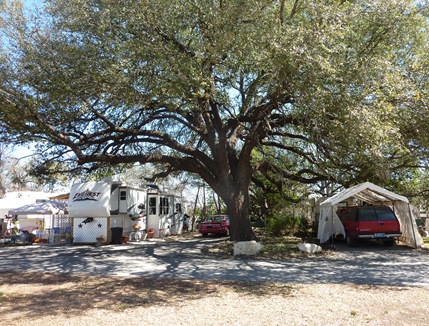 As we went under the tree, I felt a bump like we had run over something in the road. Kevin was mumbling something under his breath, so I wasn’t sure what had happened. When we stopped at the site, he went up on the roof and did not find good news.

There was one dead branch of the tree that had cut a slice into our rubber roof about 11 feet long. There are three larger tears and then a long line of smaller holes. Our bathroom skylight also had a hole poked into it. Needless to say, we were not happy!!! 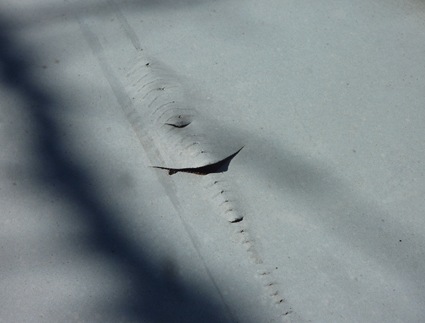 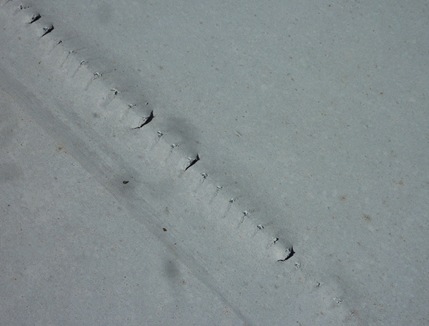 The camp host came by a little later and told us we would not be charged for the site for the week and he will be bringing me the insurance information for the campground so we can file a claim with them. He also told me that we’re the third unit to have damage from that tree. One unit actually had the air conditioner torn off the roof. He also told me the owner told him to get someone out here to cut back more of the tree. I sure wish they would have taken care of that sooner!!

So now we have to have the tire damage from October and the roof damage repaired when we get back to Wisconsin. I called the RV dealer and made an appointment for them to look at it on April 15th. Based on my description, they think the entire roof needs to be replaced. That’s at least a week in the shop. We’ll get an estimate for the insurance company and take it from there. In the meantime, Kevin taped the cuts on the roof with duct tape. We’ll see how that holds up.

I had a rough night sleeping because of all of this. I only got about four hours of sleep and then my mind wouldn’t let me rest anymore. How are we going to get this all taken care of? Where are we going to stay? How long will it take? I hate fighting with insurance companies!  etc., etc., etc. I sure hope I can sleep better tonight.

Posted by RV Khronicles of Kevelyn at 5:42 AM 10 comments: Links to this post