Today we had a phone interview with the recruiter from Amazon.com. It’s possible we are a little crazy, but we have agreed to work for them again this fall.

We did make it very clear that we will not accept the same job we had last year. We stressed that we want the picker job where we will be walking instead of standing. We also said that we would prefer the day shift, but would consider nights again if that’s all that was available.

The recruiter assured us that he would do everything he could to get us the picker job, but it might require adjusting our start date a little. We’re willing to do that as much as we can based on our commitment in Wisconsin. I made it clear that if they give us the same job as last year, we would decline. So, we’re hired, and we’ll have to see how it works out as the start time gets closer.

Between the two of us, our take home pay last year was $10,000 for 10 weeks of work. Since we plan on buying a new truck this summer, we want to earn back some of what we will be spending. There just aren’t many opportunities for seasonal, temporary work where we can earn that much. So, we’re willing to give it another go. If anyone out there is interested in more information, send me a message. Amazon offers a referral bonus, so keep us in mind if you might be considering working at Amazon this fall.

We had a very nice visit the last two days with a Canadian couple we met almost five years ago on a European bus tour. They are just a little younger than us, and have recently sold their business and retired. They bought a travel trailer and are touring the United States.

We’ve been friends on Facebook and have stayed in touch. In the last month they’ve traveled from Nova Scotia to Miami and then across to Arizona. Kevin tried to convince them that slowing down is a good thing :)

We took them on a walk through the desert behind the RV park. Then we told them about some of our favorite places they might want to visit as they continue their travels. They are headed to Yuma today, and then plan to continue on to sites in Arizona, California, and South Dakota as they make their way back to Nova Scotia. They’re basically making a giant loop around the entire United States. Wow! I forgot to take a picture, but we sure had a great time reconnecting.

I love this lifestyle. We have met such nice people. It’s great to reconnect with people we’ve met in the past, and meet new people as we move on.

The people parked behind us have several birdfeeders set up on their site. Everyday I see lots of birds outside our window. There’s one bird that is so cute. It looks like a little sparrow, but it has red on it’s head and breast. I don’t know what kind of bird it is, but I love watching them. 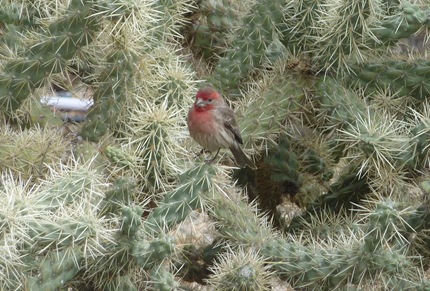 I have my hummingbird feeder on the window. The other day a beautiful hummingbird was at it. It had a totally red/scarlet head and green body. I’ve never seen one like it. Of course, by the time I grabbed my camera, it was gone. But, oh my, it was just gorgeous!

While we were working at Amazon last fall, I saw a product for saving in progress puzzles. I bought one, and we’ve been working on this puzzle this winter. We finally finished it. It was so hard to do with all those white golf ball pieces.

You build the puzzle on the yellow mat, and just roll it up on the inflatable tube, put some Velcro straps around it, and put it away. It works great. The RV park here has tons of puzzles to trade. So, we’ll be checking it out and finding a new one to work on. 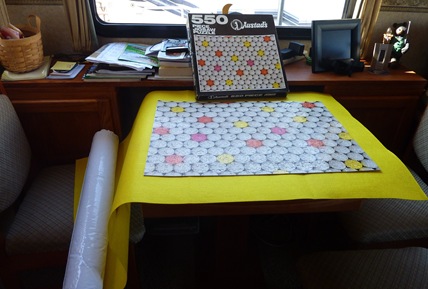